I force opened the printer cartridge bay on right side (it still did not go auto shutoff), took the cyan out- and cartridge is not the problem, no leak around it and where it ataches.
Managed to look a bit inside the printer and all the connection of ink tubes look okay.

Probably print head is the issue? How to move it aside, how to get it out? What could be wrong with it? IT seems a bit strange to me that the head would leak... but yeah, I do not know anything about these printers.

Nope.
I opened the right cartridge doors with screwdriver method (the printer did not yet autoshutdown so I just unpluged it) and took the cyan cartridge out, but it is okay, no leaks.

I checked the hoses as much as they are visible from the "hole" under big top cover and everything seems to be dry.

It looks like it is comming from the head.
Just like this guy had:
https://www.dpreview.com/forums/post/60808878
So how do get the printhead to move in center and get it out?
And if I have the same problem as that guy- where are these inner cartridges and how to fix that? That foil seems simple, it should be just properly sealed around the edges and good to go?

The guy I posted before is Sergey, also a member here, I found out his post. He did the same that I got on my head, siliconed the plastic. But as I understand, he did not put that head back, he bought a new one:
#46
https://www.printerknowledge.com/threads/how-to-remove-pro-1-printhead.11180/page-5#post-106351
But the interesting thing is, that a month ago, this was posted:
#139
https://www.printerknowledge.com/threads/how-to-remove-pro-1-printhead.11180/page-14#post-118082
I think we three have all the same problem. I also did nothing, normal printing, and out of nowhere cyan starts to spill?


And again I learned from Hat, that probably I should not plug it out, but just shut it down with a button:

Your cleaning ritual was near pretty perfect and the On/Off button is the best way of powering off, when you pulled the power plug from the wall, on power up again the printer then does a hefty cleaning cycle, just to punish you because it knows how long it was powered off for.
Click to expand...

There should be some "Hat´s golden advices for PRO 1" topic, to put everything what to do and what not to do to this machine.

Octopus said:
How to force to get the printhead in the middle of the opening to see if something is detached?
Click to expand...

The cyan CISS tube that is connected to the print head is where the leak is originating from, check the fitting on the back of the print head, to do this print a nozzle check and when the printer starts to print, pull the power plug.

Be warned wait 5 minutes before removing any tubing, and yes this will cause the printer to run a big cleaning cycle, there are no shortcut with the Pro 1, ink is expensive, don’t restart the printer again until you find the leak..

I am a naive idiot. Or maybe just an idiot- a normal, most stupid one.
So I let it print the nozzle check, unpluged the thing, managed to get the head centered. Doesn´t really mater, because it is not locked in this case, you can easily move it. 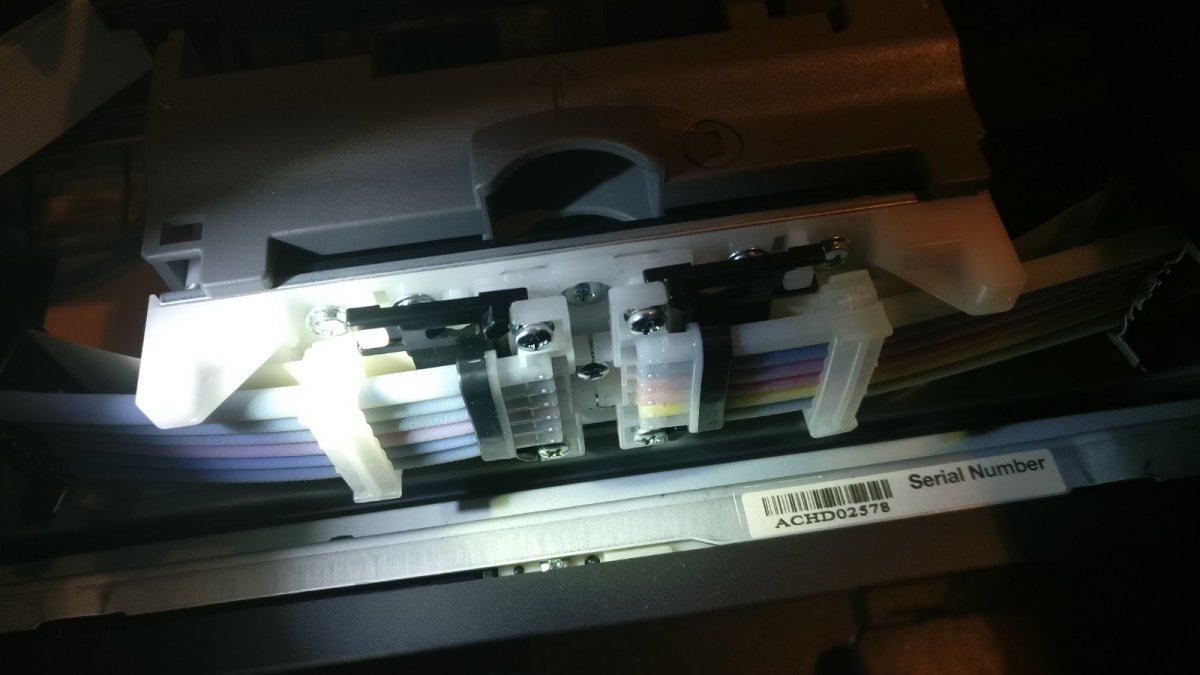 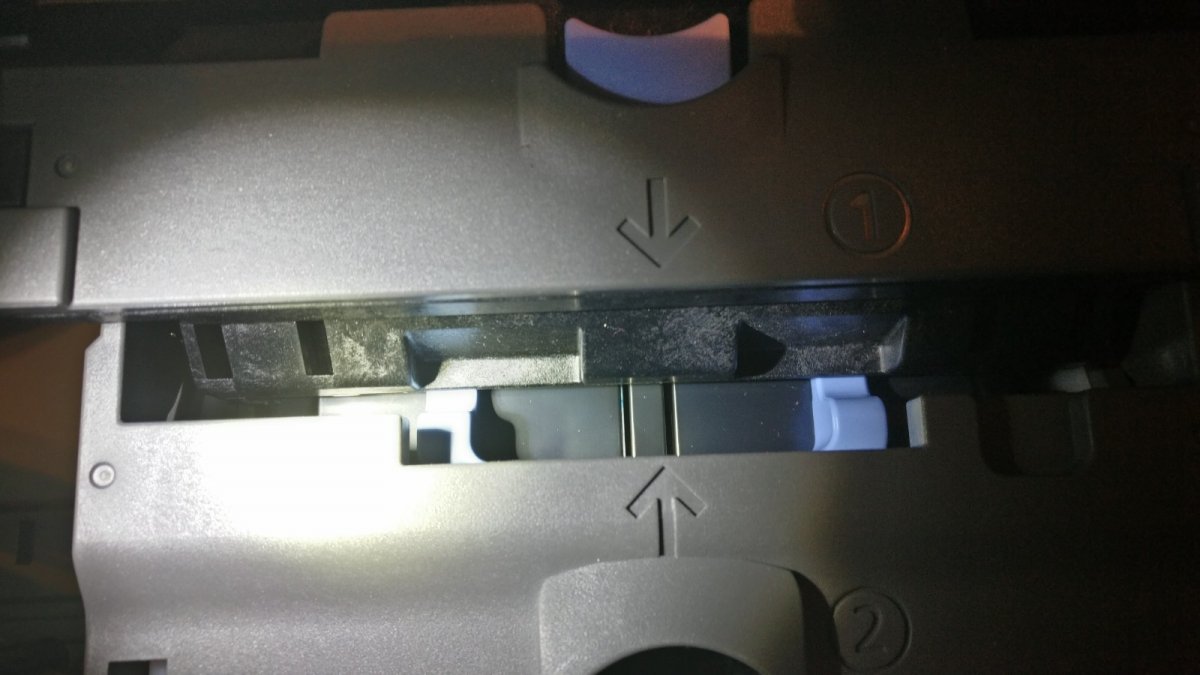 There is something under tha printhead "bed" where it rests while not printing. The place where it is dumping the ink to "clean"-> my wallet.
I took the paper and presed on those sponges gently- seems like mostly black, some red and cyan. 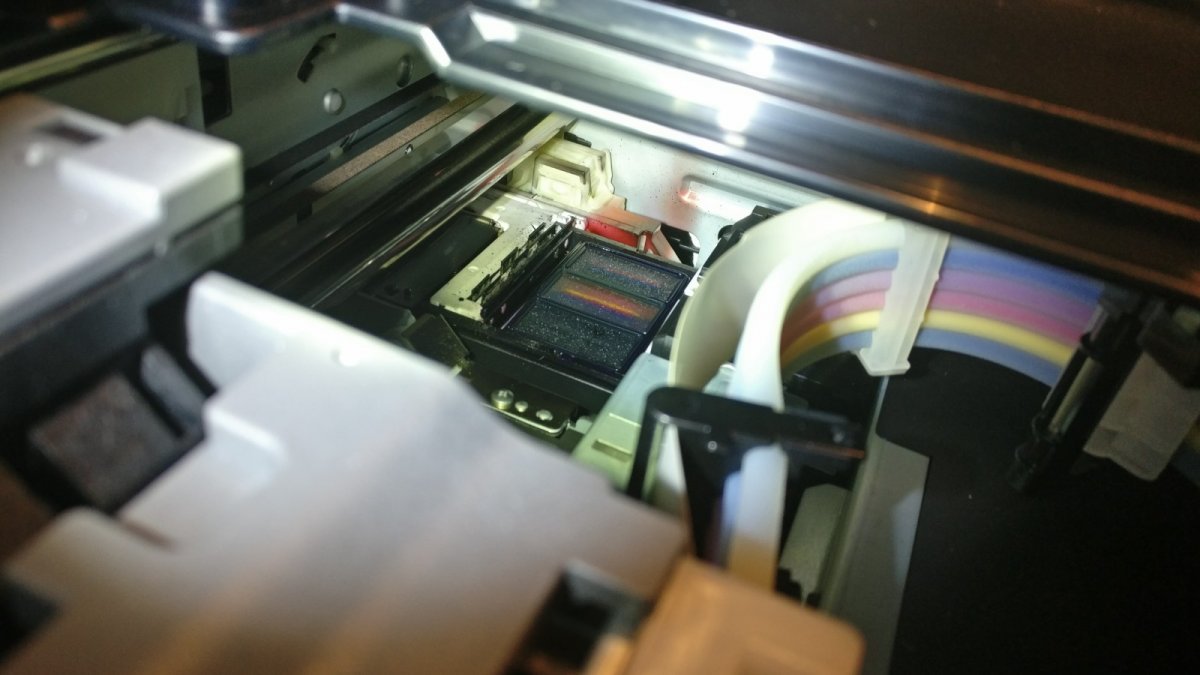 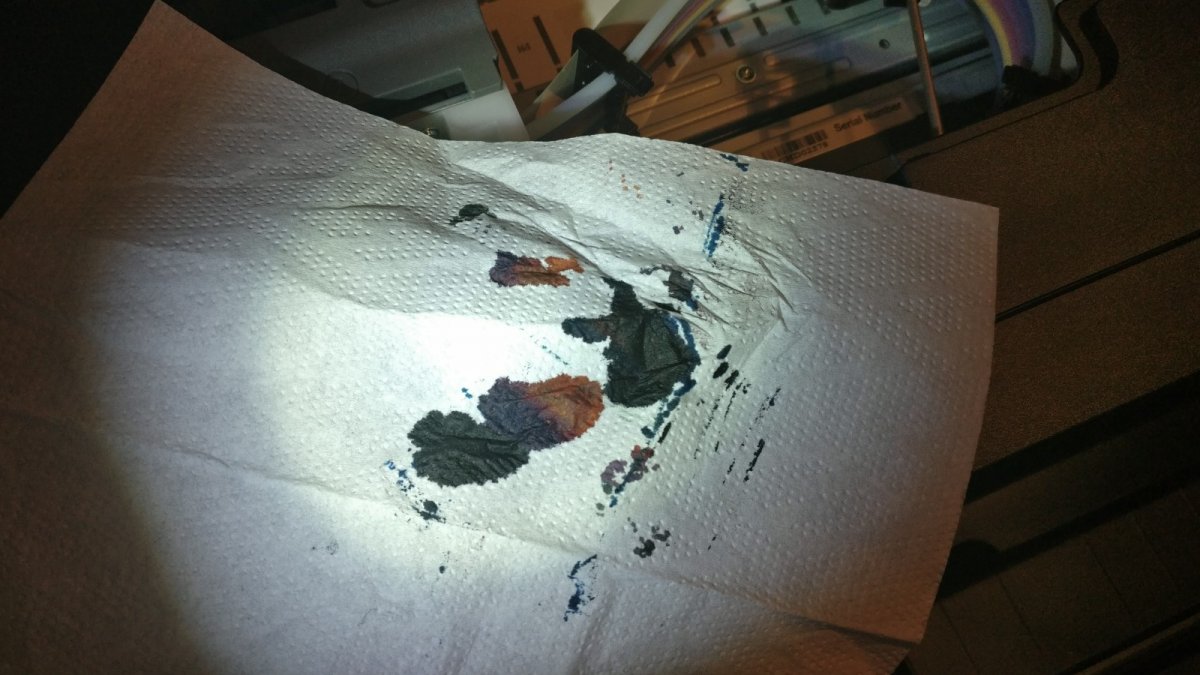 So I was thinking maybe nothing is wrong today? (when I think about it now...what an idiot)
And the darned printer started to cry on my computer that it is offline and it wants to continue when I plug it in.
So even after reading Hats smart advice not to plug it in until finding a leak... I was courious, not seeing anything, maybe when i turn it on it will just continue printing the nozzle check and it may be ok. (yes, I know...)

I, the idiot pluged it in, it spit out my unfinished nozzle check (with a small spill of cyan on the edge, but enough to ruin a print and to let me know it is not working) and started wasting ink. Now I already know the sound it makes.

And now I have unknown cyan leak and fresh two red crosses for photo black and gray...

I hate electrical things and I am slowly more and more doubtful. We thought today with my girlfriend on investing into new head, they are still available. But if oru journey continues like this...
The main concern of mine is how the hell do I know the waste ink ammount in the printer, electronicaly speaking? For example I change the head and then after two A4 prints, it decides that it is full an then what? Trash can? How can I know if mine can be reset at home?
How this machine knows it was unpluged and for how long... it probably has some battery inside that should be killed? But then probably it wouldn´t work at all...
And why on earth do you need a big cleaning cycle after power break? This is so canon evil, imagine a power shutdown in you house while printing. Not that you destroied the paper, no, the printer deliberately destroys a decent ammount of very good ink. Such an non enviromental friendly and consumeristic capitalistic logic.

Now what... I have seen a pdf from Hat, about something that you strip the printer a bit and manualy move the head in position... probably it would again make a big cleaning cycle later? But at least i could move it without changing cartridges that I should now.
And get the head out? I have a feeling I have the same leak as Sergey did.
Or should I just order a new head and octoink to fill the cartridges to fill the head? But this is busting 250€+- at least... If the waste ink ammount can´t be reset, no logic in doing this I guess.

I am sorry you can’t find the source of your cyan leak, but doing anything at all to the printer will instigate another cleaning cycle, and you can’t check the waste ink amounts because it’s impossible (Locked) now to get into service mode where it was visible.

The Pro 1 has many fail safes built, so it you try to take it apart then it’s likely not to work anymore. It has a live EPROM chip that records everything you do to it and yes it has a battery also, but interfere with that and your printer becomes a door stop.

If you can’t solve your problem then don’t go spending more money on the printer, at this stage it’s not worth it, invest in a Pro 10 instead, that is a more manageable printer with much the same output quality of the Pro 1. (Very user friendly)

You can even refill the Pro 10 carts very easily with 3rd party inks or OEM if you so wish and the inks that you have left from the Pro 1 will also work in the Pro 10, but check before using..

Except for the middle and light grey the PRO-10 uses the same inks as the PRO-1.
The PRO-10S is still in production, and a charm to refill.

So it is not possible to reset the waste ink warning if you get it even if the printer is not full? The year this printer was bought is 2014 I think, should look on the receipt if it has anything to do with firmware.

I was already thinking at the begining about PRO10, but have red that 1 is slightly better, so I got this one. Damnit. Same inks in a way of ink, not cartridge, meaning with my cartridges I could take out the ink and fill the pro10?

A new print head wouldn´t solve the problem? But yep, it is 180€+-... I still have 19 original unopened cartridges. Some "gorilla ink" (any good?) cartridges with chips are 77€ for a full set in germany... maybe enough for testing and trying to repair the leak on the head?

Can´t figure out why these things are here so expensive used when infact they are obviously dying out. People trying to sell them for 600€... I even found a guy here selling brand new print head (stored on the shelf for few years), but he wants more than a brand new is in france (eparts) or germany, unbelivable, he should be happy as hell that he found a guy in such a small country having this printer, and also willing to save it. In few years he will have a paperweight in a form of a new print head. Just like I have my printer now.

For every printer there is a window of opportunity for refillers.
Not too soon (before 3th party inks and evt resetter are available), not too late (after spare parts are out of stock and second hands worn out).
That's the main reason I decided not to wait any longer to switch to the PRO-10.
My 9500 still is in full working order, but when my last printhead will fail I risk to fall behind the PRO-10, and chances are small the successor will be refillable.
I can share inks between both printers, as you can do too.
Try to find a second hand PRO-10, the only part that can fail is the printhead and you can replace it yourself in a few minutes. Most have low page counts.
For € 600 you have a new PRO-10S, or a second hand + spare printhead + refilling gear + (3th party) ink.

PS: let's continue PRO-10 discussions on one of the active threads about this printer.
Last edited: Jan 24, 2020

Octopus said:
So it is not possible to reset the waste ink warning if you get it even if the printer is not full? The year this printer was bought is 2014 I think, should look on the receipt if it has anything to do with firmware.
Click to expand...

It maybe possible to enter service mode with your printer, it all depend on your firmware, any version below 2.01 will work and you can then check and reset your waste ink counter if that’s the case..
You must log in or register to reply here.
Share:
Facebook Twitter Reddit Pinterest Tumblr WhatsApp Email Link