The Hat said:
Everybody assume that everyone else knows the difference between DPI and PPI. !

Well their assumptions can be very wrong and varied, but as most are not exactly sure, the subject tends to get glazed over by introducing even more technical issues thrown in to mask their own discrepancy’s.

PPI is indeed Pixels Per Inch, which is specific to Digital imagery and equipment, and most tend to get that bit right, and it should never be confused with DPI, but what about DPI ?

Again here nearly everybody gets this wrong, and with a commanding voice they’ll say, “You meant PPI don’t you.” (This subject has been cover already in some detail.)

But DPI was used mainly for Image Reproduction in the Printing and newspaper trade back when Adam was still a boy, it’s still used in scanning and RIP Laser printers, but never in Inkjet printers. (Using a Loupe on a laser printed sheet to see these pesky little dots clearly), 300 DPI can’t not be seen clearly by the human eye and so was used as a Standard.

Lastly we come to LPI, so what the hell is that used for, ask and you are guaranteed to be told wrongly, it now stands for “Lumosity-Performance-Index”, because (Wikipedia) says so, but it meant something very different to the Printing industry.

Back then it was used to convert halftone screens to a pattern of dots for every known publication, the term LPI, was in fact Lines Per Inch for a given image and was used for perfect reproduction, and DPI was measured as 1 ½ times LPI.

it’s still much the same on the average Inkjet printer today, use too porous a paper surface or too high a print setting and the dots will merge to eliminate the white area around them giving a much poorer print to what was originally intended, it’s now known as bleaching.

Agree 100%, and mainly because I too come from a commercial print background and understand your figures. (Offset - web and sheetfed)

However inkjet printer manufacturers also like to muddy the waters. My Epson 3880 manual p133 states: Maximum resolution 2880 x 1440 DPI. This is also mentioned in more than one place in the manual.

As far as I can ascertain my Epson driver has a maximum resolution of 720ppi thus leading to the Logical (I hope) conclusion, that the printer prints multiple dots to complete one pixel.

And to thinks we started with a simple original post about final image size!

Roy Sletcher said:
As far as I can ascertain my Epson driver has a maximum resolution of 720ppi thus leading to the Logical (I hope) conclusion, that the printer prints multiple dots to complete one pixel.
Click to expand...

Yes, you are right, the driver needs to render the color of an individual dot, with CMYK subpixels with varying
droplet sizes. The dot resolution of Epson printers is typically 360 or 720 dpi, or 600 dpi with the newer P400/600/800 models, the CMYK subpixels in each dot are printed with a max of 2880x1440 or 5760x2880 etc. You cannot address these subpixels via the driver individually. The size of the spoolfile would get into the Gigabytes quickly. The same applies to Canon printers, their dot resolution is 600 dpi, but the rendering uses a pattern up to 9600x4800 - you directly could print microfilm with that resolution....

@stratman It looks like we are now having two parallel discuassions.

"My old" Win 10 has the same three photo apps as the Anniversary version has. My right-clicking a photo and choosing "Print" opens the same window as if I open the photo in Windows Photo wiever and selects print. I just thought my suggestion was the easiest way.

It is said the best program is one that you are familiar with and which does what you need. I think right-clicking a photo and choosing print is the easiest way to print photos. Others might have other opinions.

@Roy Sletcher, This Pic is made up to be 9 PPI but your printer will not just use one colour in the same space, it can use dozens of colour so it can get rather crowded in just 1 inch of paper when printed at the 360 or 720 PPI.. 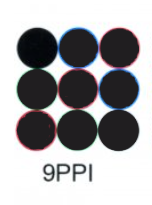 Partially yes if you mean concerning the OP. No if you meant the two of us. My post addressed both your post and the OP's original post.

I meant to say the following in my last post but forgot -- I wonder if the OP used Windows "Photos" to view and print images. If so, then maybe that was the issue.
Last edited: Aug 17, 2016

The Hat said:
This Pic is made up to be 9 PPI but your printer will not just use one colour in the same space, it can use dozens of colour so it can get rather crowded in just 1 inch of paper when printed at the 360 or 720 PPI..
Click to expand...

That's a good example of the potential confusion over terminology. Your image may represent 9 pixels in a square inch, AKA 3x3 resolution, but the inkjet printer uses a DPI (unfortunately called "PPI" in your example) of 300 or 720 (in your example as well) when printing the actual image. In other words, the printer will use up to 300 or 720 dots of ink per inch to represent those 9 pixels per inch of the digital image!

The printer's DPI is essentially independent of the digital image's PPI. Similar terms representing similar things but should not be used interchangeably. Unfortunately they are.

stratman said:
The printer's DPI is essentially independent of the digital image's PPI. Similar terms representing similar things but should not be used interchangeably. Unfortunately they are.
Click to expand...

Unfortunately, it’s the printers’ terminology that wrong (Forked tongue) it only represents DPI it doesn’t actually use it..

i understand and i had used for long time windows photo viewer and canon easy print, but what happens if u want to print in a format that is not available like 12 x 12 ???? cause the layout that brings are contact sheet. wallet, 3.5x 5, 8 x 10, 5 x 7,
4 x 6 and full range that could be if windows appears paper size of 12 X 12 but it's doesn't have those numbers.
You must log in or register to reply here.
Share:
Facebook Twitter Reddit Pinterest Tumblr WhatsApp Email Link