My point is that the XP15000 is formulated to run intense Magenta and Yellow and dare I mention intense Red as well. You can see the effects on the prints after profiling. The Epson scheme on the print engine is close to what Canon used on the Pro-10.

I just mentioned that messing around trying to convert inexpensive printers and profiling hoping to get good results is fraught with issues when compared to current true photo printers. There was never any intention of comparing the 1000 directly to the XP15000. I have done work on the XP15000 already years ago.

I've run through the gamut of all of this for years and now can say it is only an exercise on conversion. The 8550 is different because the inks it runs is less intense that that of the 15000. You need to seriously look at the red in the XP15000. Red from the P400 etc. is a completely different animal to mimic. It's shortcomings shows in the output. Red is not simply red. On the P400, the yellow is also special, look at the OEM natively and you will see.

I have been asked multiple times as to whether I would offer a pigment solution to the XP15000 because the temptation to obtain a pigment printer for $350 USD or so is huge. Based on what I saw in the dye inks on the 15000 when I developed my 15000 inkset, I saw it would be near impossible to pull off. So I never bothered. On the 8550, based on my ink sampling I thought it could be done and it has been. Over a year ago this was done, if you check on one of Jose Rodriguez podcasts I discussed it and showed real printed relative output against a range of printers. So should one convert an 8550..only if one is willing to accept the limitations, which I already outlined. In Canada the 8550 is https://epson.ca/For-Work/Printers/...ne-Wide-format-Supertank-Printer/p/C11CJ21201 can be had at 999.99 at Best Buy.

For $300 more CAD you can have a 1000. Should you spring for the Pro-1000. If you have/own a profiling system, I seriously doubt you would spring for an 8550 instead. For $300 CAD which is $220 USD why would you if you enjoy printing. My point was quit the messing around and get the real deal and be done with it. Capture images images and print, forget about printers thereafter.
Last edited: Dec 12, 2022
N

mikling said:
The 8550 is different because the inks it runs is less intense that that of the 15000. You need to seriously look at the red in the XP15000. Red from the P400 etc. is a completely different animal to mimic. It's shortcomings shows in the output. Red is not simply red. On the P400, the yellow is also special, look at the OEM natively and you will see.
Click to expand...

Would you mind eleborating on that? What do you mean with intense? A higher saturation at equal lightness? I would be very surprised if Epson has more than 1 set (CMYK + R?) of modified dyes. The differences you see are probably dye-carrier liquid concentration differences. I could be totally wrong, of course
Last edited: Dec 12, 2022

nertog said:
I had an XP-960 running on pigment inks for a while (with similar refillables). It worked for 5 refills or so before ink flow started to decline. Dye inks did better, but the original Epson cartridges are by far the most reliable. @pharmacist: do you have a dye vs pigment gamut comparison for us?
Click to expand...

I'm looking to the gamuts of the 3 inks in this test, this at L*=50 with blue for the Claria inks, orange for the pigment ink mix and green for Fujifilm inks

The Dye Fuijifilm and Claria inks are pretty close together, these small differences won't be visible in actual prints. All colors mixed with pigment yellow - from green in the +a-b sector to the reds in the +a+b sector are visibly weaker, as well for lighter L-values, it is the weak HP yellow causing this. I have seen in the past that HP yellow pigment inks were typically performing weaker than Canon or Epson pigment inks. 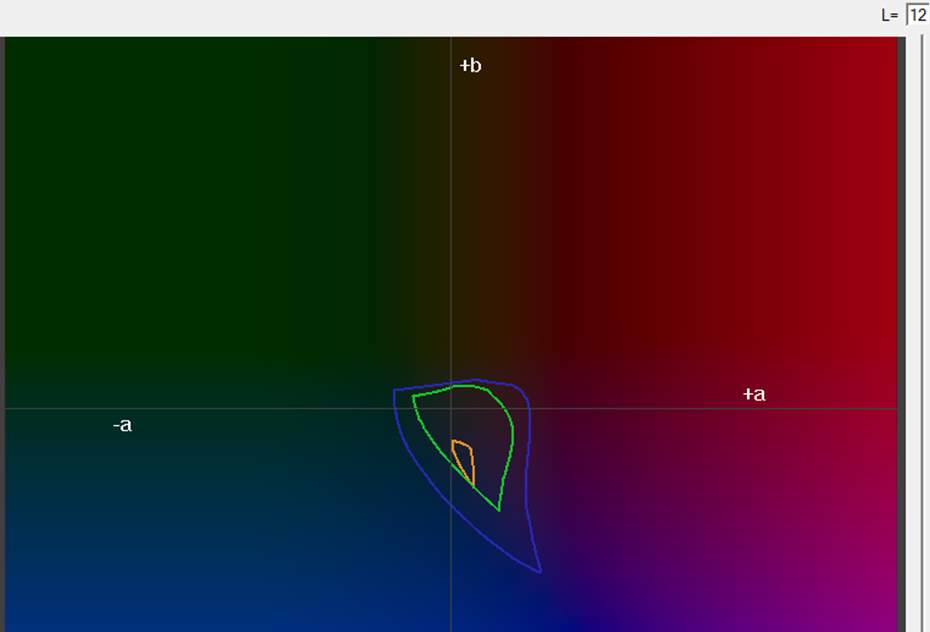 The Claria inks perform by far the best at this luminance level, they would deliver the most details in darker image areas, but this all is a matter of the image content in the darker areas in the first place, the Fujifilm inks are somewhat weaker with a smaller gamut range, and the pigment inks are just above the black point of this inkset - no detail definition anymore, and no black point compensation will cure that very much.

I was using a slightly different ink mix for my previous P400 - red = 1 part yellow + 2 parts magenta and orange = 2 parts yellow + 1 part magenta, I was using various different pigment inks - from farbenwerk in Germany - InkTec, some Conecolor inks and some inks from China via Aliexpress, but all suffer one way or another from the typical pigment ink side effects - bronzing, gloss diff etc , varying to a different degree and depending on the actual papers.
Last edited: Dec 13, 2022

TBH, that was my first thought and I'm fascinated that you decided to do this as I'd pretty much decided it wasn't going to fly. So, long term it's going to be interesting to see how things go with this and, to be brutal, rather you than me

As to limiting your endeavours to your expertise... To be frank, sod that... You go play with what you want. It's the only way we learn what we shouldn't have done so we can share the occasional unexpected wins or battle scars. Best of luck with it...

pharmacist said:
I don't know why Epson went away from the former damper based cartridges with compartments, making it much easier to use pigment ink in aftermarket cartridges.
Click to expand...

You've answered your own question if I was to make an educated guess. Anything that made refilling, CIS systems, etc... easier has been readily abandoned in favour of split hair refinements that make OEM tolerances tight but workable while making compatibles harder to maintain.
You must log in or register to reply here.
Share:
Facebook Twitter Reddit Pinterest Tumblr WhatsApp Email Share Link