Yesterday I found some time to experiment with pigment ink in my Epson XP-15000.

It is known Epson printer can deal with both dye and pigment ink even the smallest 1.5 pl droplet size printers like the Epson 1500W. For this experiment I used CMY pigment ink for the HP printer (bubbljet compatible pigment ink, so it can be used in both HP/Canon/Epson printers alike), OCP LK (gray) pigment ink, mixture of 20% Ocbestjet PK + 80% OCP PK (this is by experiment proven mixture to mute down the overly glossy PK of the OCP PK) and for Red I used a mixture of 20% HP Y and 80% Inktec Powerchrome M. 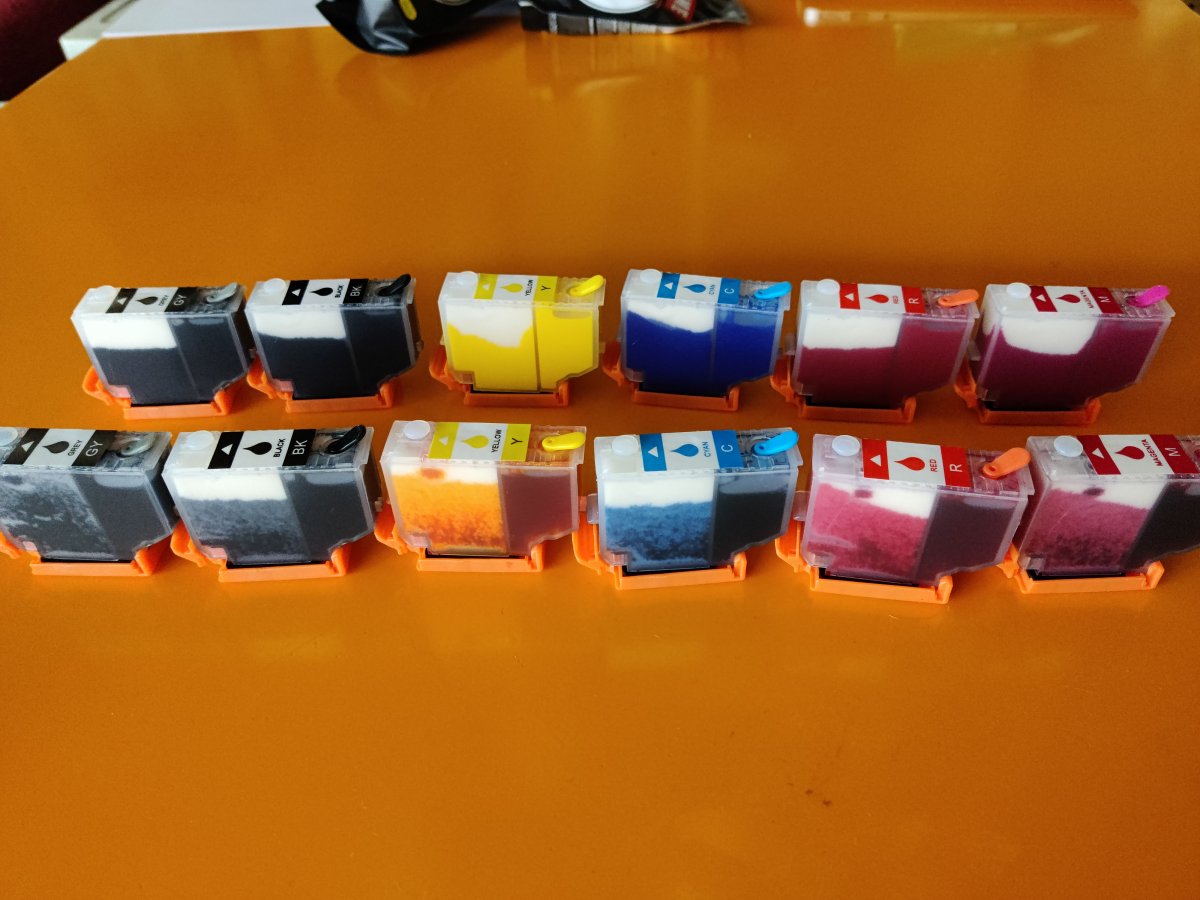 Front set of cartridges: dye, the row behind: pigment ink mix. You can clearly see the difference of the opaque pigment ink with the transparent Fujifilm Dye ink mix taken out from the printer. 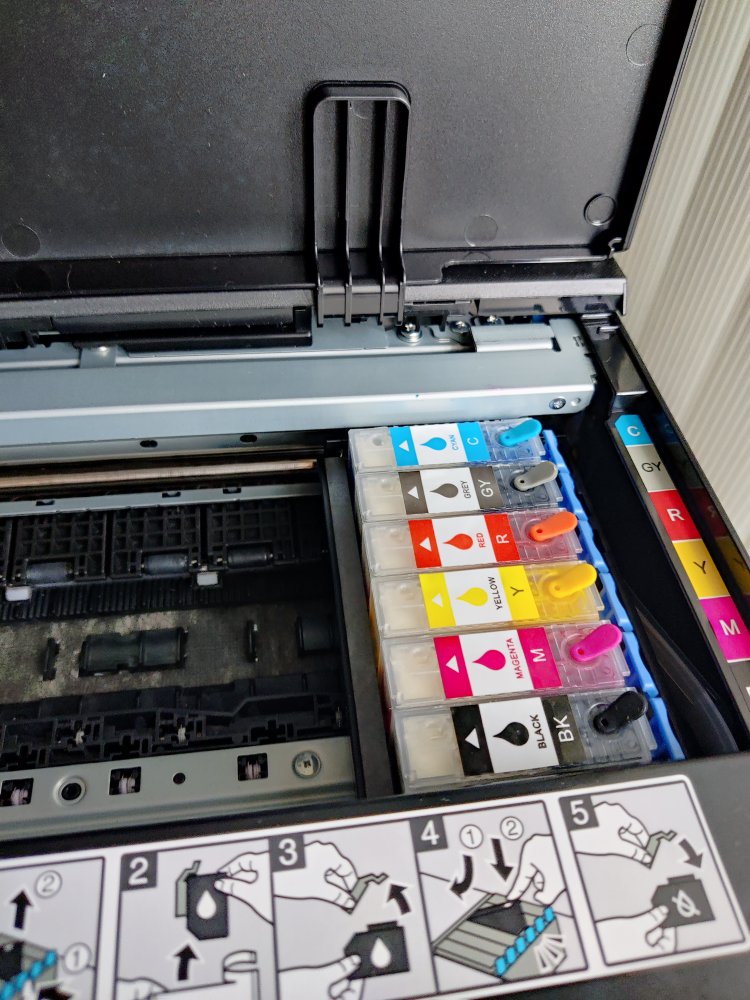 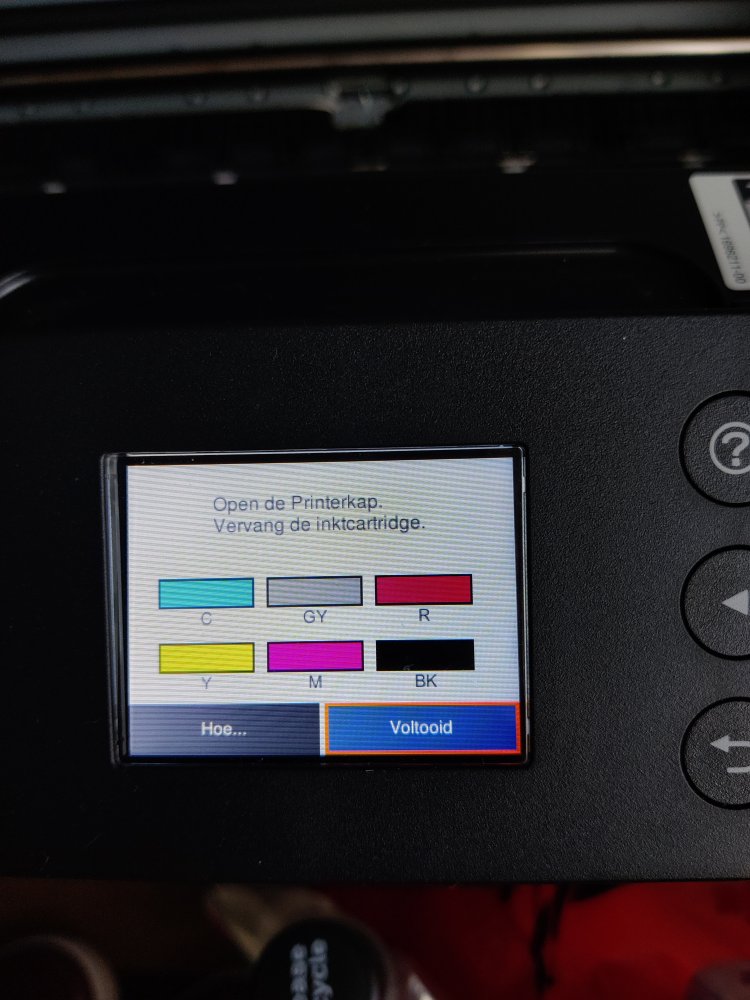 After making a custom profile I compared it with the prints with both the Epson SC-P800 printer (Ocbestjet K3 pigment) and the XP-15000 printed with dye ink (Fujifilm Dye Ink Mix). 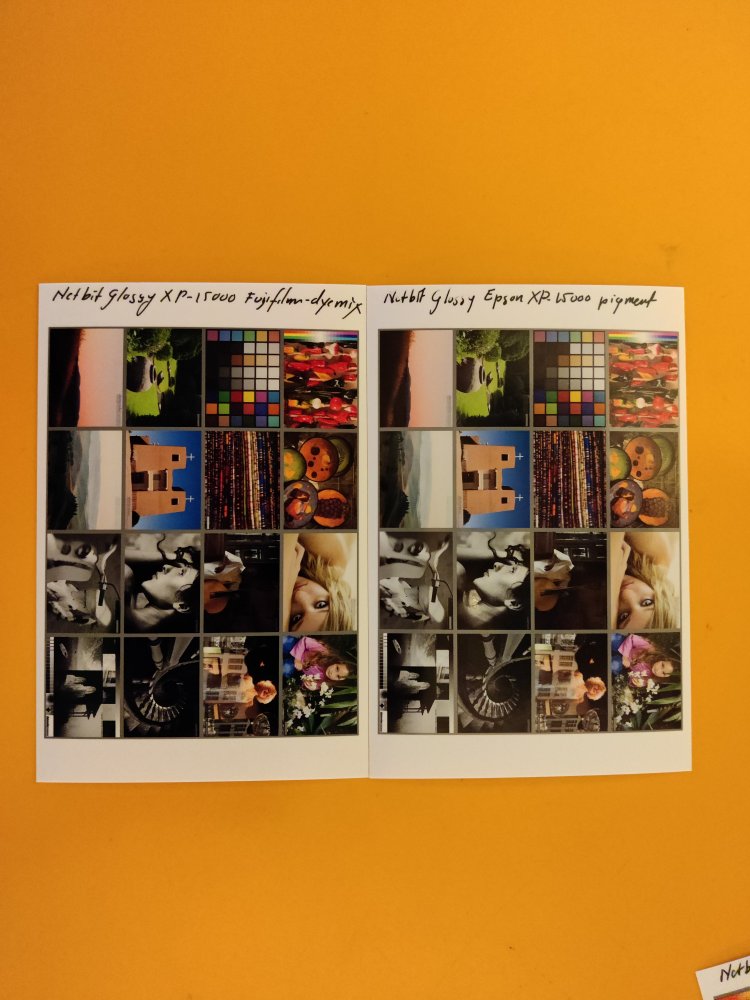 As you can see: it works very well, but the pigment ink prints are a bit dull compared the bright and vivid colours fo the dye ink prints. Also the gloss differential is suboptimal compared to the Epson SC-P800 Ocbestjet K3 ink (probably because of the lack of the LLK ink that is used as a kind of gloss optimizer) and more bronzing too. I think the solely usage of pigment ink would be on matte papers and refill the PK cartridge with darker matte black to obtain better blackness. Dye ink will yield much more vivid and brighter pictures with more contrast and glossiness, which was expected.

That's an interesting experiment indeed; you are addressing some effects you typically get with pigment inks - you are using a more or less accidental mix of 3rd party inks which you just have available, and this in combination with another 3rd party paper, other ink/paper combinations may yield a better gamut overall. And you most likely have some gloss effects - gloss differentials etc, but o.k. - the prime intent was a test if it is working at all with pigment inks in the XP15000. I was using Canon Lucia pigment inks drained from larger cartridges with an old expiry date, this at an affordable price, these Lucia inks performed pretty well.

I remember from plenty of tests - at the time the Epson P400 was still on the market - with a gloss optimizer - that such gloss optimizer has two effects - a visible improvement of the gamut incl. a better black level and a virtually complete removal of gloss effects and secondary colors/bronzing under particular viewing angles. Prints with a GO overprint came pretty close to the look of prints with dye inks.
Last edited: Dec 11, 2022

Based on what I see in low res and the relative comparisons. This certainly shows why just profiling with a hodge podge is no longer a solution for the performance you seek. The yellow pigment and magenta pigment used is not the correct one at all very far off the dye equivalent. In fact the results of the pigment ink the 15000 reminds me of the results with Image Specialists ink for Claria....that was then 10 years ago BYE... it left a lot to be desired in the end.
Pigment use on these printers which do not use lighter versions of CMY and Greys will produce greater gloss differential. That was expected from the get go. Even on dye check for grain on the lighter parts of ramps. It is there.
I'm not seeing the shadow details on the dye ink mix but that could be the image.

I have an ET8550 running on pigments and it performs at a level of say the older R2100/2200. For some people this is "good enough". For normal users it cannot be discerned from say even a P800 until the situation comes along and the viewer is pointed to what to look for. The biggest drawback is that one should NOT use this on gloss papers. Even when using luster papers, non gloss lusters or semi gloss is acceptable. However one must always understand that the 8550 main role in life is a document printer with the occasional foray into photo printing. It will NEVER replace a full performance photo printer. It however is a jack of all trades but master of none. This was simply to fulfill a desire dating back over ten years converting a dye machine into pigment successfully. BUT....I have moved forward and that bucket list is crossed off.

For the refillier in North America who can afford a Pro-1000, it is a buy once and DONE printer. Thereafter focus on your skills in image capture, editing and completely ignore hardware reviews moving forward. The 1000 is costly but once you realize that no further purchases or there will be no more "upgradeitis" obsession it is actually less costly. No tank maintenance or fear of ink pad..it even has a resetter for maintenance tanks. Built in densitometer and vacuum hold down on paper path on a desktop! This ticks all the boxes that I developed after twenty plus years of printing. I will be performing some more mods to the 1000 to make it an even sweeter ultimate hobby photo printer.
Last edited: Dec 11, 2022

I don't think it was @pharmacist 's prime intention to run the pigment ink converted XP-15000 directly against the Canon Pro-1000,

mikling said:
For normal users it cannot be discerned from say even a P800
Click to expand...

And as long as these 'normal' users would rate XP-15000 and P800 prints equivalent it's not a bad performance at all.
Principal limitations remain on glossy papers - bronzing and gloss effects but these are not specific to the XP-15000 at all.
A question remains - what makes the Pro-1000 so much superior in this context - the number of inks and a greater gamut ? Or the Chroma optimzer ? or the light inks ? Or the Canon inks ? And how are these parameters becoming visible for the discerning user - not the 'normal' useer ?

My intention is see if the sponge based refillable cartridges can cope with pigment ink. For hobbyist it would be nice to have a semi-K3 (K2) printer to make neutral B&W prints on smaller size matte papers without having spending huge amount of money to buy an expensive SC-P9000 or Pro 1000 printer. The Epson XP-15000 is pretty good small size semi-large format printer having all the possibilities to combine the P400 (red ink, without light colours) with the P600 (gray ink, but without gloss optimizer). The Epson XP-15000 is like in between the P400 and P600: with red ink, but without gloss optimizer (because dye ink based) and with gray ink from the P600. What if Epson would introduce an hybrid P400/P600, which I would call it the P500: pigment based with gloss optimizer, but the orange ink substituted by gray ink ? Then you would have the best of both worlds, namely ABW (gray ink), both matte and photo black loaded (no ink swap necessary), gloss optimizer (not seen on the P600).....but that would compete directly with the higher end P600......with all the benefits from the P400 and without the cumbersome black ink swap procedure of the P600. The orange ink in the P400 was for me a pretty strange choice, as it is in between red and yellow installed, as red is already used (like in the Epson XP-15000 or the chromatic red used in higher end HP designjet printers). Gray ink would be much better choice to be used in the P400 printer instead of the orange ink.

I would be afraid of a longer term effect - that the foam insert in the cartridge is filtering out a small amount of pigments - let me assume a small amount of a few % every time you fill up a cartridge again, this may not be visible in the gamut and printouts but that some ink smudge is building up in the long run. But this could only be observed over a longer period of actual usage.
And I would have a look to the cleaning unit - to the foam pad there if any pigment residue is building up over time - which was a problem with the pigment black in the ET-7750 printer, it can be cleaned away if it turns up.

Ink stained Fingers said:
I would be afraid of a longer term effect - that the foam insert in the cartridge is filtering out a small amount of pigments - let me assume a small amount of a few % every time you fill up a cartridge again, this may not be visible in the gamut and printouts but that some ink smudge is building up in the long run. But this could only be observed over a longer period of actual usage.
And I would have a look to the cleaning unit - to the foam pad there if any pigment residue is building up over time - which was a problem with the pigment black in the ET-7750 printer, it can be cleaned away if it turns up.
Click to expand...

I think so too. The better choice would be refilling the original cartridges with pigment ink (bladder based like the Canon pigment cartridges). I don't know why Epson went away from the former damper based cartridges with compartments, making it much easier to use pigment ink in aftermarket cartridges.
Last edited: Jan 8, 2023

Yes - something like a P500 - with a gray instead of the orange of the P400, but Epson abandond the use of a chroma optimizer completely , and Epson tries to tell their customers it is not needed anymore when you print with Epson inks on Epson paper, it's up to the user to accept that; but as soon as you start using 3rd party inks and/or papers you are faced with the old pigment ink issues
N

I had an XP-960 running on pigment inks for a while (with similar refillables). It worked for 5 refills or so before ink flow started to decline. Dye inks did better, but the original Epson cartridges are by far the most reliable. @pharmacist: do you have a dye vs pigment gamut comparison for us?

Ink stained Fingers said:
but as soon as you start using 3rd party inks and/or papers you are faced with the old pigment ink issues
Click to expand...

A pig with lipstick is still a pig…