Bronzing problem solved on the Pro 9500

The Hat said:
Ive had to switch to using a magenta tint instead of the usual black one because it was out-putting to much GO
and the prints had little puddles (bubbles) on them, its surprising how much you can output.
Click to expand...

Was this on the ix 4000? I don't understand because when using all the carts in the printer that any one colour affected anything. Did you use a rip to print the GO or did you just print the same photo with GO in every cart?
I got those little puddles too when I tried a third coat of GO on 100% opacity.
I haven't done any more testing yet but I have done a fade test by putting GO over sections of a dye print from the pro 9000 done on the Chinese paper & the fading seems to be the same over the whole print. The print has been hanging up naked for about 6 weeks facing a west window with very minimal late diffused afternoon sunlight.
Top shot is pigment ink bottom shot with dye ink 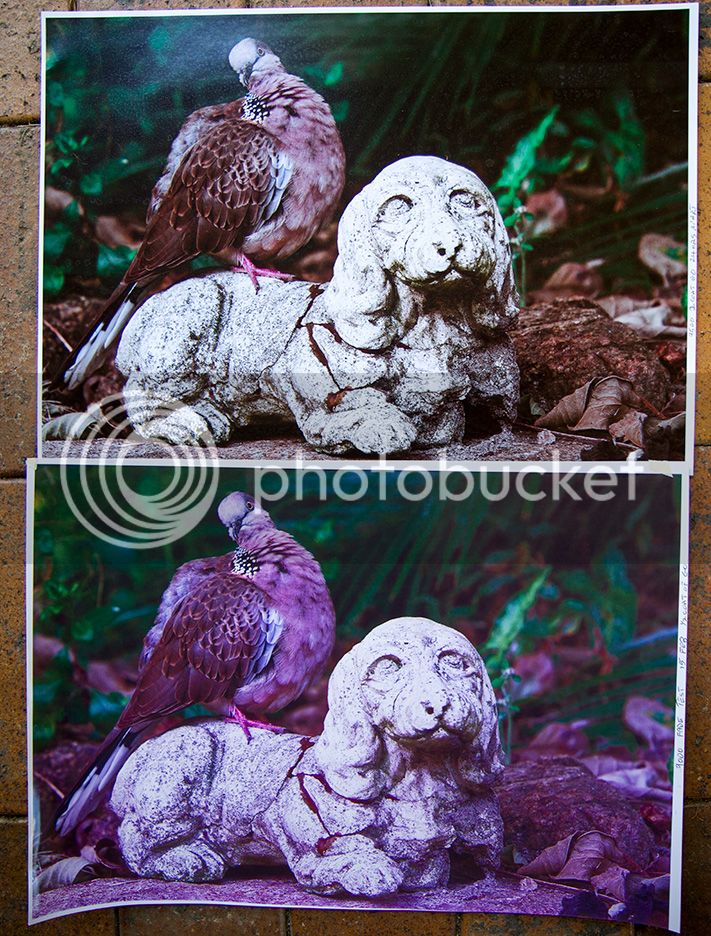 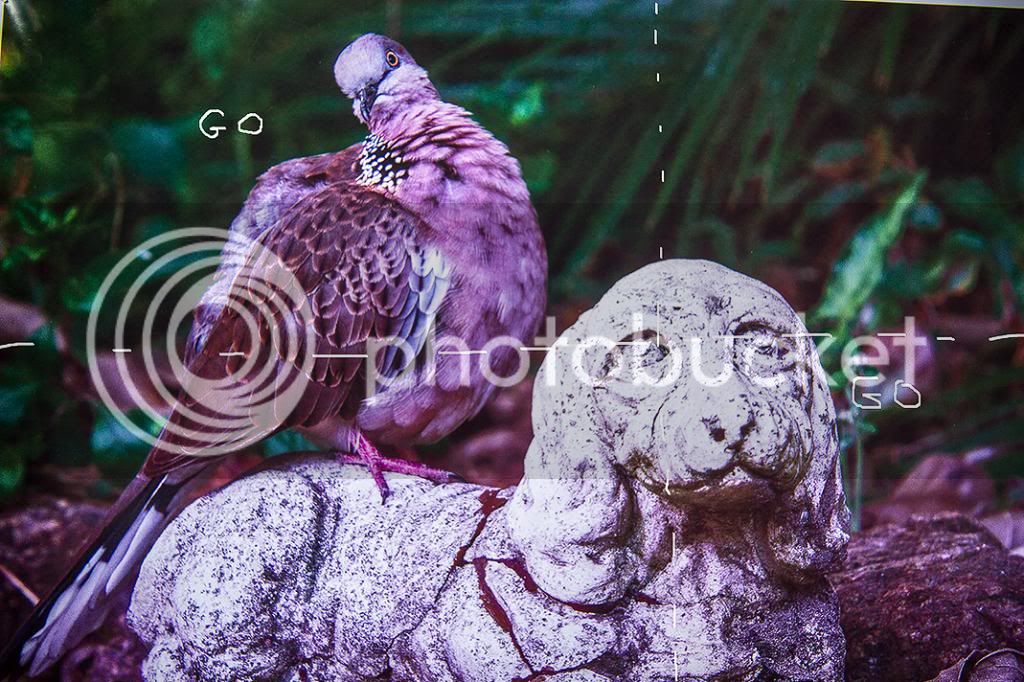 Hi rod,
To apply the GO I just used a magenta coloured solid in Photoshop using normal print quality and set to glossy paper, when using the black solid I got the puddles.

This printer only has three cartridges for photo printing so I set it to output from all three carts (Colour Mix), the last time I tried this I only used the single black pigment cartridge on plain paper.

My overall goal is to apply the GO onto different paper surfaces then overprint as normal
using dye inks to get shaper crispier text and good graphic quality, as you well know paper can turn out to be the most expensive part of any print work.

The experiment you tried was on photo paper; try the same picture on plain copier and one on inkjet matte paper, hanging side by side and see and how different the ink reacts on both the surfaces, I cant do fade test right now because were in our monsoon season.

Paper can cause your prints to fade much quicker than the ink itself because the chemical treatment needed to attract and hold the ink stable may well react with disastrous consequences. (Instant Fading)

If your luck enough to get photo paper that is most suitable for I.S. inks then the longevity
can be as good as anything that Canon can produce, digital satin coated paper would be a good place to start.

Later I want to print GO onto photo paper and then overprint it with a picture then reverse the procedure by printing the picture first then the GO and compare the results at the moment the 9500 does a nicer picture that my Pro 1 does, that I plan to remedy also..

Hey The Hat, any updates on printing GO and overprinting it with the image? I just bought some 450gsm cold pressed water colour paper to experiment on my 9500mk2, the texture works great but the ink coverage was not so good.

I was thinking of painting GO over it as the print coating before I print on the paper. I thought GO is the magic coating that makes all the expensive paper expensive. If it can be used as the overcoat, we can save more $ using cotton paper produced for water colours etc and open up a lot more paper for printing. Will appreciate any help here!

I havent tested the GO on any of these matte surfaces yet but do intend to later on, and also on a variety of different other papers in the very near future.

I got a new iX7000 and am going to use that with just GO in all of the cartridges and see how I get on with trails with that, Ill start with the glossy paper first.

When printing on very soft or highly absorbent surfaces you have to take a different approach than on normal papers, just like the cotton, tissue and canvas papers they can be easy or diffcult it's just how you approch it.

I use a very small DPI (50/60 dpi) to keep the dots open and set the output to a low or standard quality on the printer so as not to flood the paper surface with ink too much, have Prevent paper abrasion on also helps.

Printing on some of these types of surfaces can take a lot of time and paper just to get it right or be just perfect, you need to leave it overnight to view them at arms length or further even better, speed is you enemy so take your time..
G

Great, thanks! Maybe I'll order a small bottle and do the hobo way i.e. paint roller it. I just got a 9500mk2, don't have the luxury of having a dedicated GO printer.

I have printed about 120 glossy A4 sheets using graphic and photo images for my GO test.

All of my test prints were printed on the Sihl glossy paper from Lidl, cheap and cheerful but still very good quality 280 gm Photo paper,probably not exactly suitable for pigment inks.

I used an iX7000 printer which has four photo cartridges and one Large matte black cartridge, I put GO in all except the large black cartridge which still had the normal black ink in it.

Because I use my 9500 most of the time with MBK black, it was not very practical to keep changing the cartridge back and forth when I wanted to test print using the GO, but it did work just the same.

I used Photoshop to generate the overprint tint which was at 60% on all four colours and set to CYMK rather than RGB, I figured I would be able to use the same amount of ink from all the cartridges evenly, it didnt.

I tried printing the GO strips across the page, the same way that Rod did with his photos at first, but later switched to a full Tint covering the entire page which was better at judging where the GO actually was.

It didnt seem to matter how long I left the test sheets to dry, several hours or overnight but I did notice however that I got poorer results on test sheets that were only left half an hour before putting the GO on them.

OK cut to the knitty gritty..

Placing two photos down (Digital Dog) side by side there was no difference at all, but when you tilt the paper to see some affects, the hand (Bottom Right) was just about perfect in every way but the red ball and nails were still just a bit flat but then compare it to the uncoated Photo they were miles apart.

The Girl (Top Left) her eyes and lips are near perfect and the Step wedge (top) looks just like the one I'd printed using Dye ink.

Overall if you are using 3rd party Glossy paper and I.S. inks and you find youre not quite happy with your beautiful photo then putting a coating of GO over your print will certainly bring the smile back to your face.

Now if youre planning to rush out and try this, well dont because rushing will get you nowhere fast, you'll need to take your time to test and test to get it almost perfect, its about 85% effective at curing the bronzing problem and even a second coating 24 hours later may also be of huge benefit.

I do think if this Gloss Optimiser from Image Specialists was a bit more glossier,
then everybody would switch to using it big time, the stuff would sell like hot cakes..

I also did test photos printed with pigment and dye inks exposed to the sun light to see if the GO has any effects of the Dye ink at all, probably not but well see..

Thanks for the info Hat & I think you may have just about wrung all the benefits out of the go that is possible, I'm not sure where it can go from here. I agree with your 85% improvement to the bronzing/gloss differential which does make the prints usable at least & from what I read over at the DPReview forum glossy type papers are avoided by most pigment ink users & they seem to print on the art type matte papers which I can't afford.
In the wonderful world of Oz where overseas manufacturers think we are all millionaires or at the very least mugs that will pay any price (& we normally do). We can at least buy on the internet at good prices but the cost of postage for photo paper makes it not worth it, the only reasnobly quality paper I can get locally is a Chinese glossy so by you perfecting the GO thingy I can now at least use this paper on the 9500.
I did notice a strange phenomenon with the GO on my Chinese glossy is on some prints with faint details in the shadows that after applying the GO I got more defined details in these areas which was a bonus. I think we will keep quiet about that as Mike will put up the price of the GO if he hears it has other magical properties

Just a quick thought but anyone thought to do a little judicious testing to see how the GLOP works, if at all, to preserve prints against fade resistance?

websnail said:
Just a quick thought but anyone thought to do a little judicious testing to see how the GLOP works, if at all, to preserve prints against fade resistance?
Click to expand...

I am already on that one, Ive used dye as well as pigment inks on plain/gloss paper in what little sun that we get here, I will report back when their full cooked.

The problem is that the GO is not UV treated so it wont I suspect give any protection at all. (Useless)

Wouldn't it be great if was then everybody would be using it especially on their dye photos, could you imagine the sales potential for the inventers..