Bought a used Canon Pro-10s - Do I try and return this or is it still salvageable/fixable?

The Hat said:
First things first, inkjet printing of any sort costs and its never cheap so trying to do it on a budget is not going to work, you either continue with this great printer, or you give up the idea of ever owing another printer..

Yes the head has clogs but they can be resolve with time and patience, so please don’t send it back, persist until you know one way or the other, because as Websnail said he has inks and carts for your model printer, that are a dam site cheaper than OEM carts and ink..

websnail said:
As an aside, one thing that's not been suggested is to save some time and buy yourself a new printhead. You're obviously in the UK so the best source for one of those is here:
https://www.crc-tasktron.co.uk/product/20010/genuine-canon-print-head-qy60085010

(CRC-Tasktron are the service centre for Canon in the UK so the printheads are legit and cheaper than other legit units).

PS: No I didn't pay @The Hat for that last recommendation...

So I sent the seller a message right after i last posted to explain the situation and she actually just wanted me to keep the printer and gave me my money back - I asked her multiple times if she was Ok with it as it was very kind of her but she seemed to want to just get rid of it and told me it would be destined for the tip otherwise, so I decided not to look a gift horse in the mouth and held on to the printer!

I now have some spare cash (£80) to put towards getting this working again. Thank you both very much for your input - as I said I'm very new to this so its much appreciated! From what I've taken on it seems like I have three options:

A) Cheapest option - continue to use the same inks and try soaking the print head for a longer duration as @The Hat suggests. This is the most straightfoward option and saves me spaneding more cash, however it leaves me with less time to print people things before christmas and I wil still be using the Cartridge People inks - @websnail They are indeed the sponge-type and they have already given me issues beyond clogging - had multiple carts report empty/near empty despite having the same amout of ink as carts that report 75% full.

B) Replace all of the current inks with a full set of OctoInks (which seem very well reviewed!) and clean the head again for a longer period as in option A. This will only run me £45 for the PGI-72 ink set compared to the £115 for Canon inks, although if there is something wrong with the head itself I will be down time and ink again.

C) Most expensive option - Buy a new set of OctoInks to replace all the carts AND buy a new head from CRC. This will run me around £180 total, but will mean I have a printer I know works and then have the spare head @websnail suggests. This seems like the most foolproof option, and I will still have a fully-functioning Canon Pro-10s for just £200 at the end of the day. On that note - is it worth having a spare head handy for these sorts of printers?

Any updates?
I'm curious about this
E

@The Hat @websnail The results are in...

I used a bottle of the OctoInkjet Cannon print head cleaning fluid to clean the print head using the 'passive' methods (no syringes, just pressure from the cleaning fluid saturated paper) outlined in this excellent video from OctoInkJet:

I then washed the head with tap water, then flushed it all out with distilled water, rinsed the PCB with 99% Isopropyl alcohol just to be sure and then left hte head to dry overnight.

I installed a brand new set of Octoinkjet PGI-72 inks and printed a nozzle check - it was MUCH better than my attempts before cleaning, every colour was showing as it should but it had a few missing lines so I did one clean cycle.

Then I printed out two more nozzle checks on the same piece of Canon Photo Plus Glossy II paper so I could really get an idea of the ink flow - it looked perfect from the start but there seem to be a couple of issues.


1) The CO rectangle seems to have some odd border around it - almost like a watermark, even though it has been left to dry.

2) The Red and Grey rectangles have extremely faint dotted lines in them - its not like the lines I saw when the printhead was really clogged, but rather a sequence of blank spots along a line. There look to be a couple on each rectangle and they are very faint - I've attached some macro shots here so you can see them. 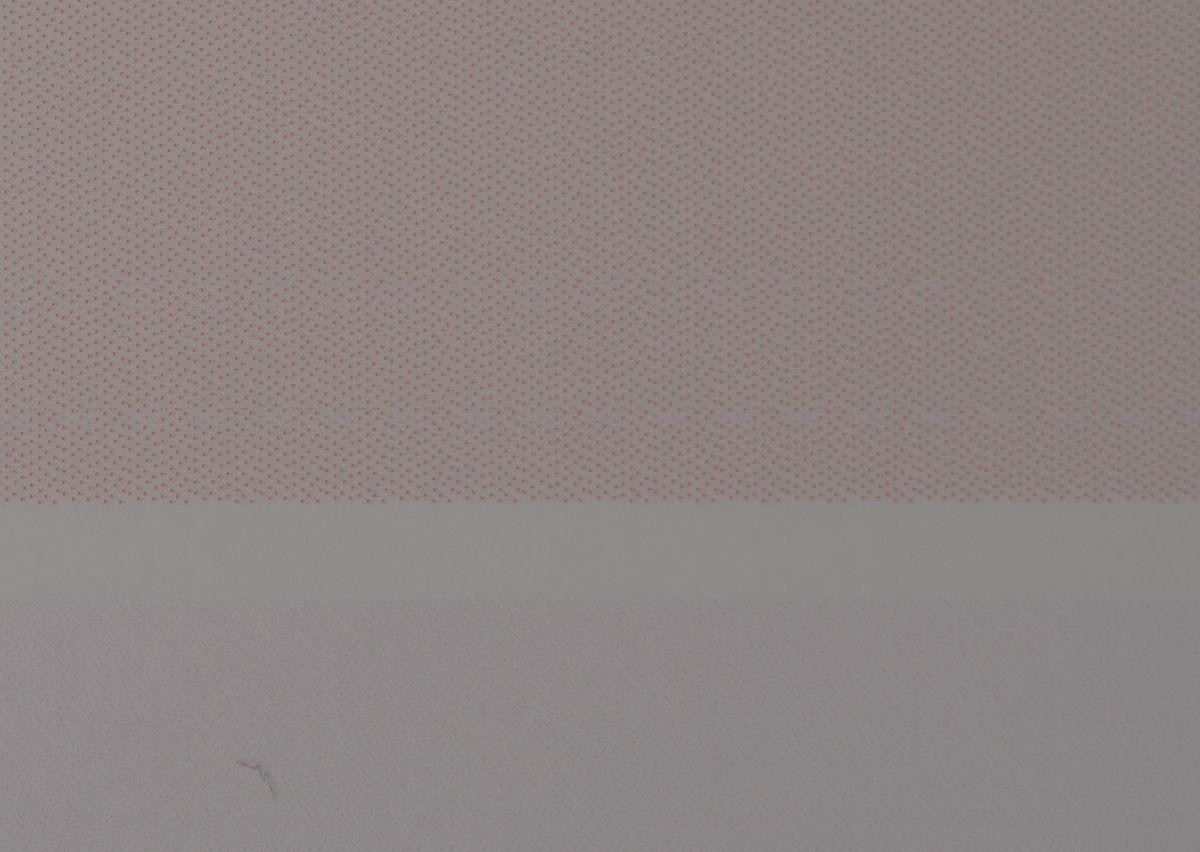 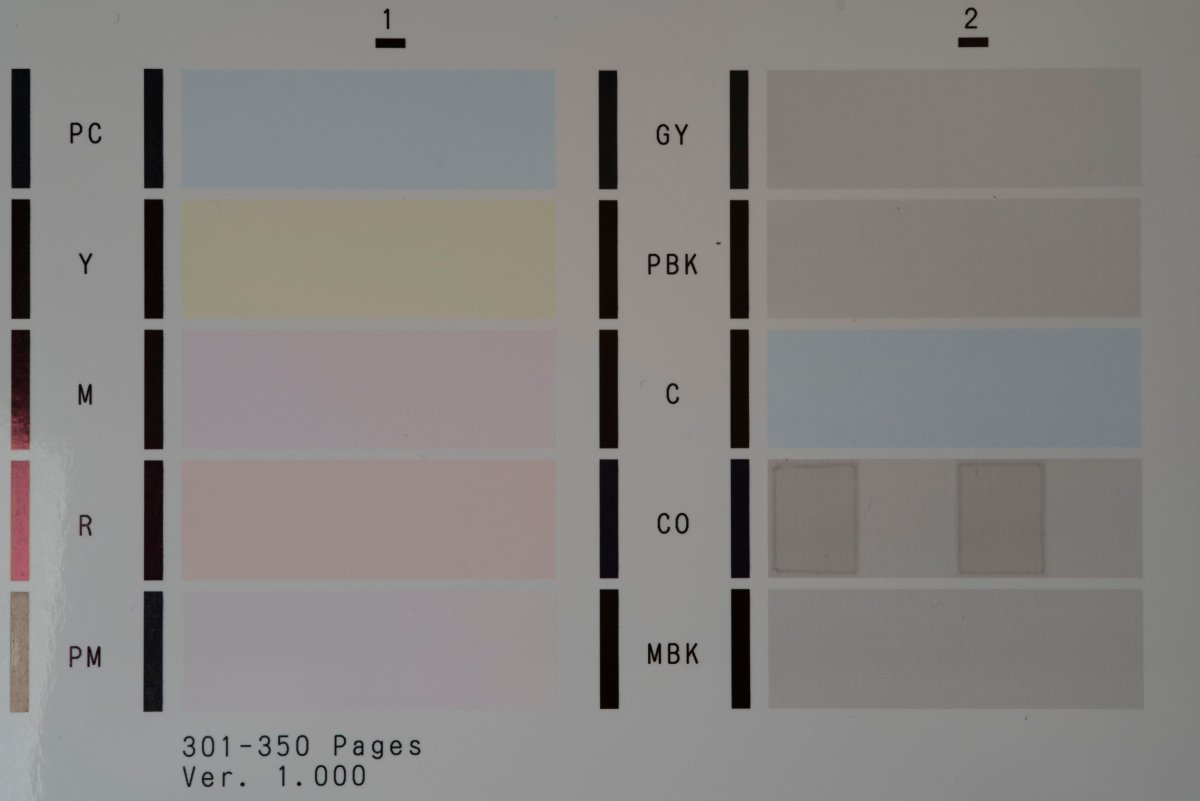 Otherwise everything else seems to be fine! I have only done one cleaning cycle since refitting the cleaned head - should I wait a day before attmepting another or would a deep clean be better? Many thanks!

Ellyrion said:
I wait a day before attmepting another or would a deep clean be better? Many thanks!
Click to expand...

No, with what you have now, your good to go, it’s been an experience for you, but in the end well worth it, just go and enjoy the prints you’ve been waiting to print..
E

The Hat said:
No, with what you have now, your good to go, it’s been an experience for you, but in the end well worth it, just go and enjoy the prints you’ve been waiting to print..
Click to expand...

I was secretly hoping you'd day that 😄! Its definitely been a learning experience - but to have a working Pro-10s with full quality inks for under £70 is very lucky! Thank you very much for all of your help - its been really appreciated!
I

Perhaps think about returning the money since it now works?
A

Ellyrion said:
@The Hat @websnail The results are in...
View attachment 14963

Otherwise everything else seems to be fine! I have only done one cleaning cycle since refitting the cleaned head - should I wait a day before attmepting another or would a deep clean be better? Many thanks!
Click to expand...

Definitively you need to improve further. This nozzle test isn’t as good as it should be. See the vertical bars at the left of some colors, specially red but also magenta and photomagenta. Those should be black, not reddish or faint grey.
If you use third party inks or a combination of OEM and third party probably some bars won't be neutral because of ink mismatching, See for instance a scan of my Pro10s nozzle test. As I use a mix of OEM and Octoinks, there’re bars not neutral black but slightly bluish or purple, In your nozzle check instead, the left bars beside red, photomagenta and bottom of the magenta are clearly off, a sign that something is not OK yet. 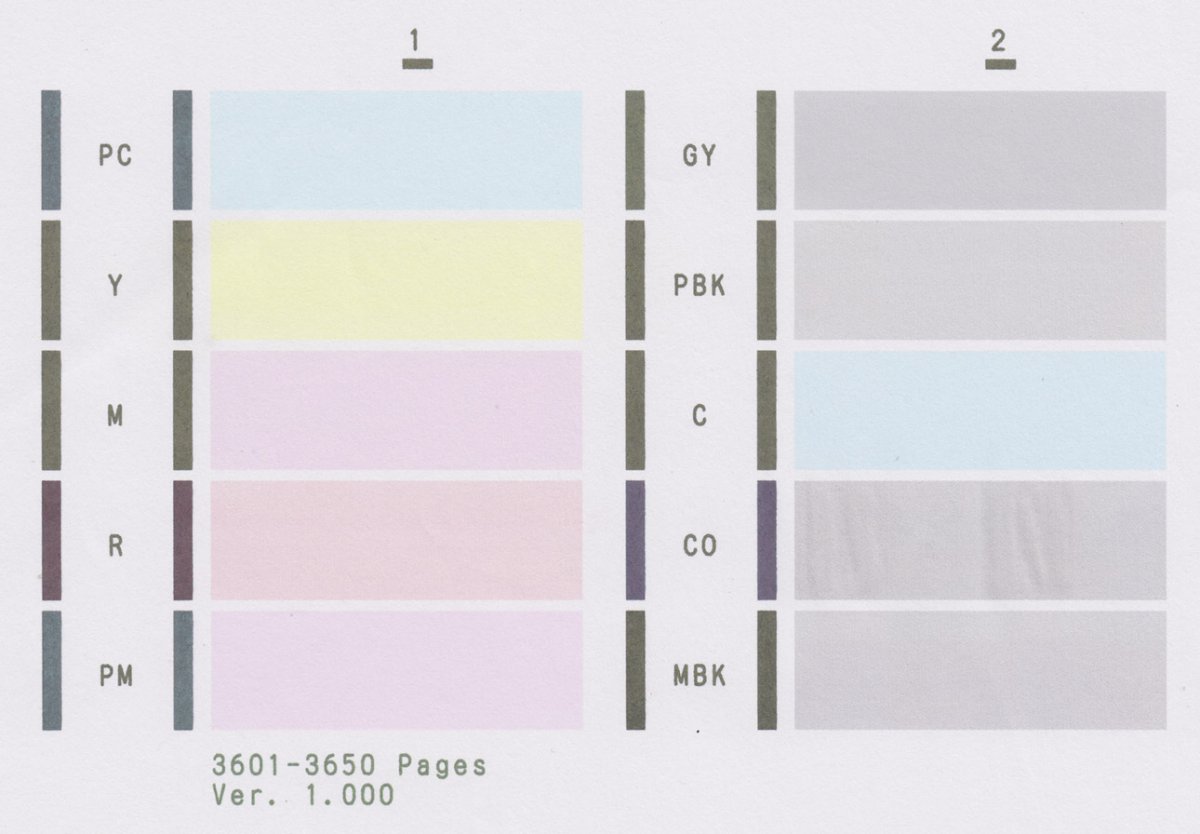 Any other little issues will soon be ironed out once a few prints are done and proper ink starts flowing once again.. Remember the original users ink was all crap..
E

ink&paper said:
Perhaps think about returning the money since it now works?
Click to expand...

I considered it but she made it very clear to me that she wanted me to have it when I tried to return it so it would go to a good home - I explained to her that I may be able to get it working again (as I was totally unsure if the head was beyond saving or not, I found multiple posts with people complaining of dead heads after using similar crappy ink) and if she was totally sure that she didnt want the printer back - she said she would be far happier giving it to me for a heavy discount than for it to sit at hers or to go to the tip when she emigrates at the end of the month.

I guess the way I see it is I was probably just as likely to have a large peice of metal and plastic instead of a now working printer, and it was only after an entirely new set of inks and two rounds of complete head cleaning that its looking in good shape - I've had to put around £55 back into the printer despite it being sold initially as "good working order" and that could have been money down the drain had the head not worked.

I've bought countless untested / mistakenly described bits of tech and most of them have been nothing but time and money sinks and now sit unused in my room, so as both myself and the seller were honest and clear about this discount I'm just going to take this as a good oppurtunity.
E

The Hat said:
Any other little issues will soon be ironed out once a few prints are done and proper ink starts flowing once again.. Remember the original users ink was all crap..
Click to expand...

I saw a post of yours from a while back explaining this but unfortunately cant find it anymore - so just to confirm: I'm alright to leave the printer plugged in (and turned on) at the wall but turned off with the main power button? IT ssits on the desk next to my bed and makes a very high-pitched noise when its turned on at its power button so keeping it on isnt ideal. Thanks
You must log in or register to reply here.
Share:
Facebook Twitter Reddit Pinterest Tumblr WhatsApp Email Share Link