@Artur5 - Read the entire linked instruction page before changing MBR to GPT because you may need need to change BIOS to UEFI in order to boot up after the switch to GPT.

FYI - As you probably know, UEFI can handle MBR drives as well as GPT. The boot drive must be GPT for Windows 11. According to MS concerning UEFI settings... For Windows 11 you must use UEFI. Some motherboards allow dual Legacy/UEFI setting (I didn't know that). Windows 11 requires only UEFI or that UEFI be preferentially first in boot up. This is explained in the extended information on EUFI and devices in the new and improved version of PC Health Check.

I'm waiting for the new 27 or 32" iMac to arrive, my old imac I'm using is 11 years old and still reasonably fast. I'd have bought three PC's in that time just to keep up with the Windoze bloatware

Ink stained Fingers said:
I did and to the same, and I had already several failures of brand name SSD's , I'm doing more backups on SSD's than I ever did on hard disk drives.
Click to expand...

Your mileage varies from mine. I used SSDs from Crucial, OCZ, Corsair and Adata. I recall selling a couple of them on Ebay but the rest is still with me and working fine. Zero problems with overal failures or sectors non erasable anymore.
I can't complain about my mechanical drives either. Right now I couldn't say how many years have ellapsed since I had one of those go kaput. Maybe I've been lucky.
A

stratman said:
Do you mean MBR2GPT.exe?

@Artur5 - Read the entire linked instruction page before changing MBR to GPT because you may need need to change BIOS to UEFI in order to boot up after the switch to GPT.

FYI - As you probably know, UEFI can handle MBR drives as well as GPT. The boot drive must be GPT for Windows 11. According to MS concerning UEFI settings... For Windows 11 you must use UEFI. Some motherboards allow dual Legacy/UEFI setting (I didn't know that). Windows 11 requires only UEFI or that UEFI be preferentially first in boot up. This is explained in the extended information on EUFI and devices in the new and improved version of PC Health Check.
Click to expand...

Thanks for all the info @stratman.
Possibly I have a clue of what's going on. The BIOS of my computer (ASUS UN68, a mini PC) allows three different settings for what they call CSM (compatibility system module):
1-'legacy OPROM' 2- 'UEFI only' 3-'UEFI and legacy OPROM'.
I suppose that Win-11 requires 'UEFI only'.
Right now I have it on 'UEFI and OPROM' because if I choose 'UEFI only', the system won't boot ( it can't see the hard disk, I expect) and it reverts to BIOS configuration. No way to circumvent this.
So, this must be specific thing of this motherboard. It can't boot with 'UEFI only' (at least this is my explanation).
Therefore, the diagnostic utilities say that neither UEFI nor secure Boot are enabled in the BIOS, when in theory they're. This must the reason too why I can't,convert MBR disks to GPT.
Another weird thing is that all my external disks are already GPT, because they're above 2Tb ( max. capaxity for MBR disks) but when I use MBR2GPT to validate them, even those external GPT disks fail to pass the test !

I have several options:
1- Do nothing and keep using Win-10 until my computer perishes ( or myself).
2- Search for a way to bypass the current problems that prevent my Asus to run Win-11.
3- Upgrade the computer to a certified WIn-11 machine

Interesting computer. What do you use it for/with?


Looking at the Tech Specs, maybe you cannot upgrade to Windows 11 depending on your configuration.


Looking at the FAQ page


I selected BIOS/Firmware and saw this FAQ

Thanks again.
To tell the truth, until you started this thread, I hadn't thought at all on a possible upgrade to Win-11, so I haven't done any research at Asus website or any other places about possible issues/fixes concerning this upgrade.
In all likelihood, I'll keep running Win10 as long as I have my present computer. It's small, silent and powerful enough for my needs. I have no use anymore for huge supertower desktops with lots of fans and heat.

All but finiished this post hours ago but got called away. Added the last sentence now and posted it.

Do not worry about your secondary drives that are MBR partitioned. They will function fine as long as they are not the Boot drive.

If a drive is already GPT partitioned then do not mess with the MBR2GPT app.

The MBR2GPT app is found in Windows 10 v1703 (Creators Update, Build 15063) and newer builds and needs this version or newer of Windows 10 to work. Is your Windows 10 version up to date?

While the MBR2GPT app is supposed to be non-destructive, I would still back up or make a complete drive image of your Boot drive before messing around just in case.

Like most everything Windows, there is more than one way to skin a cat. The MBR2GPT.exe app is the easiest way but not the only. You can reformat the Boot Drive choosing GPT partitioning. Unfortunately this will remove all data from the drive and Windows will need to be reinstalled, so have a complete back up. Maybe imaging the drive beforehand will speed up the "reinstall".
Last edited: Oct 11, 2021

Since using MS's PC Health Check yesterday I now have pesky reminder on the Windows Update screen. There was something to the same effect on the left side before this MS boil appeared.

I have not downloaded and used the PC Health Check app, as I know my PC isn't qualified because it's got no TPM module nor -header. I bought it in 2013 IIRC.

But I get the same message in Danish: 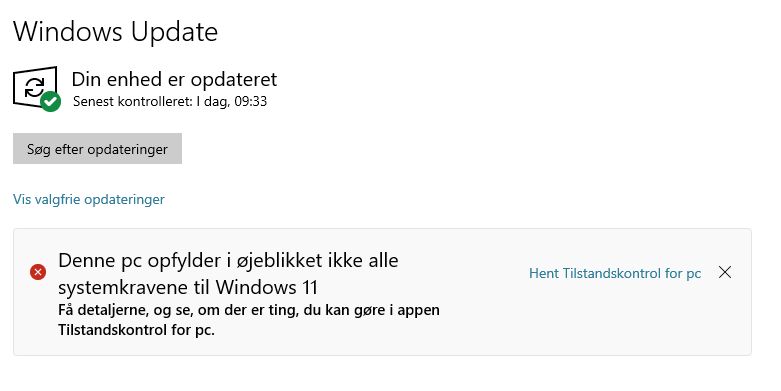 I guess it is an advertising to make me buy a new PC. Microsoft gets no money if I upgrade an existing PC, but if I buy a new PC they get money for a license and some hardware manufacturers and sellers also get a profit.
Last edited: Oct 12, 2021

I have read that it was possible to bypass the system requirements test and install Windows 11 on a PC that was not officially qualified. But this was for a preview/beta test version. I wonder if you can also do it with the released version?