I bought an Epson 1430 from a photo store that was going out of business. It was used by the owner for clients, and it’s in excellent shape, no clogs. Got it for $150 and I thought it was a pretty good deal. It came equipped with ink and ver. 6.0 chipped carts from CIS Inks. It hasn't even been used enough to get the dreaded "This printer is out of service, no user serviceable parts inside" message. I've run into this with my other printer and I know how to deal with that issue.

The light magenta was running low so I filled it with the ink that came with the printer - it was in squeeze bottles, very handy, no mess. I tried to reset the chip with my resetter, I think I got that at Inkjet Mall, works great on my other 1430. The LED remained red, did not go green. (Did I damage anything by using that resetter?) The owner reset the carts by waiting till he got a message saying to fill the carts. I've never used that technique.

I called CIS Inks and they said their chips would reset if you pulled all the carts, shut down the printer, filled the cart (s), waited 5 minutes, re-inserted the carts and powered up. This sort of worked but not very well – quite kludgy. I’d much rather use a resetter. But there is no resetter on their website, and the help person said they do not use them.

I may have been doing something foolish. After some research, I think the answer may be simply that the chips do need to be 6.3 in a 1430 printer. However, the ver 6.3 carts cannot be reset independently with an external resetter. The cartridges will be in a "master-slave" relationship, the black cart being the master. You have to reset the black first and then the others. Do I understand this correctly?

I have not tried that, maybe I'll get some feedback before I continue. For example, are there 6.3 carts that have been modified to work in a 1430 without the limitations of a master-slave setup? Maybe the newly configured carts from Inkjet Mall, for example?

I think you should assume that the chips are regular ARC - automatic reset chips - which you can test - just print the ink level of one color down to the point that cartridge reports empty/not available . go through the regular replacement cycle, take it out and re-insert it and monitor the Epson status monitor. It could very well be that the firmware of your resetter is not up to the chip version of the current chips.
Last edited: Feb 22, 2020

Sounds like you hit on it, Ink. I must say that the world of ARC is something I've heard of, but never experienced. I ended up with preferring individually resettable carts that are set with an external resetter on my other 1430. But when I bought this 1430, the seller told me to be sure to reset the carts only when one of them displayed a msg saying it was time to refill. He was very firm on this. Sure sounds like an ARC, doesn't it.

So far none of the carts has displayed that message for me. My seller must have filled them before he gave it me. I wanted to top off a couple of them. I did manage to reset some of them by pulling the carts and letting the printer sit cartless for 5-10 minutes, with the power plug pulled. I read that somewhere, and it worked - sort of. Very kludgy. See attached... you'll note my seller had a variety of carts installed. 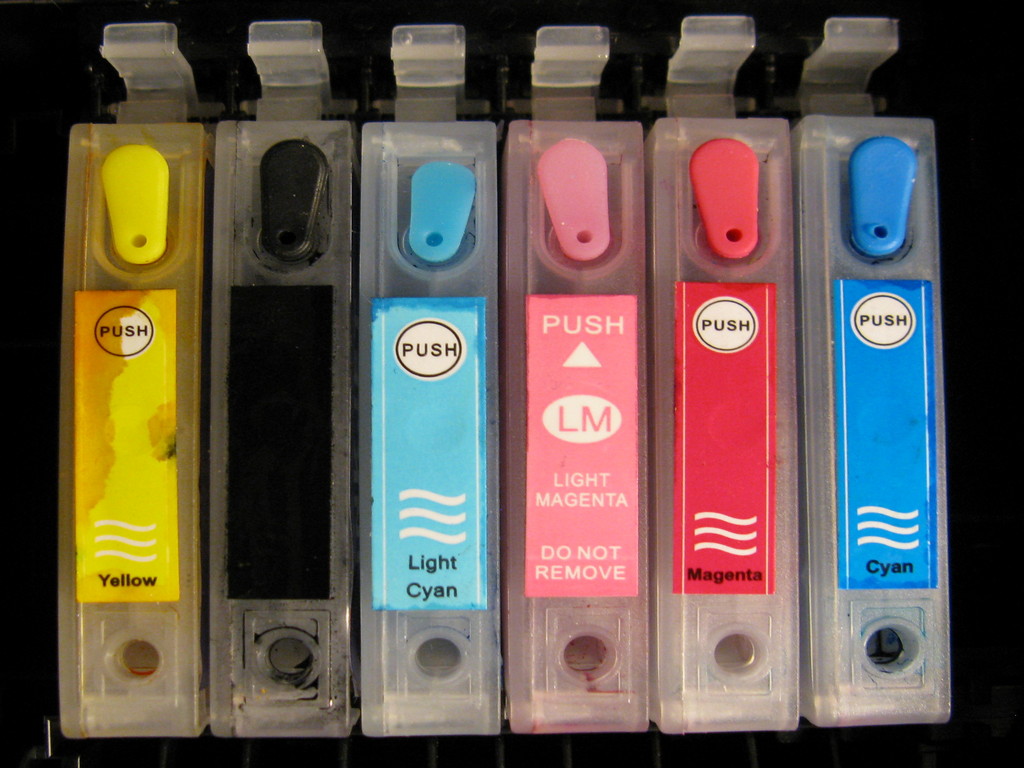 Maybe the best thing to do is wait until one of my carts hits bottom and then, as you said, to go to the regular replacement cycle. Since I'm new to ARC would you please tell me what that entails? I'd be very interested in resetting the other carts. If I can do this, I think I could live with it till I find a set of refillables that are individually resettable with an external resetter.

I think my resetter is ok... works like a charm with the 6.0 carts in my other 1430. That printer is using Inkjet Mall carts. BTW, any chance of my causing some damage to the printer in all these attempts?

I don't have a complete view of all chip options for this cartridge type, but I only can find 1 resetter at Aliepxress , and this one even with a remark that it can reset only genuine Epson chips, not other types. You would have to transplant chips in this case onto your current cartridges.
If you plan to use a CISS system , a continuous ink system, you can get something moe convenient, a chip configuration which you can reset with a button, all chips at once. You wouldn't have to remove the cartridges for a reset.

The situation with chips, resetters, reset capabilities can change over time following firmware updates Epson is doing for the installed printers unless you specifically disable such firmware updates.
Or you look for a domestic supplier for both chips or cartridges and a fitting resetter, and get a confirmation upfront that their resetter works with the chips/cartridges they supply.

Looks like we have crossed messages! Please take a look at my message just before yours, sorry!