I finally got the time to tackle the problem I had with my Pro 10, I was able to remove the top cover from the beast and to see exactly what the issue was that was making the print head stall on the left side and give a fatal error..

The timing strip on the left hand side on this printer is attached directly onto the chasse and not by a spring in most cases and the hook edge is fairly sharp which slashed a piece of the timing strip where the mounting hole is located.

It was only a matter of time before the timing strip broke and fell off and that would have cause all sorts of issues, it was hanging on by its fingernails and was twisted on the last 60mm, so the print head couldn’t read it properly..

I was able to put some electrical tape over the hole on both sides and that was strong enough to hold the timing strip in position, and when I tried a test print the problem was now gone, no more grinding noise..

While I was there I tried to remove the purge unit to fit a Printer potty but couldn’t get the unit out no matter how much I jiggled it, so I put the screws back in and just left it, without removing the purge unit I could see the outlet tubing properly..

Once I had the top cover back on and the printer back in its place, I decided to try a few prints just to see if she was working without any issues, I know one thing the Pro 10 is very difficult to work on and is not a patch on the Pro 9500, user friendly the Pro 10 is not, its progress gone backwards..

I decided to do a few test colour prints, that will be covered later on another thread.. 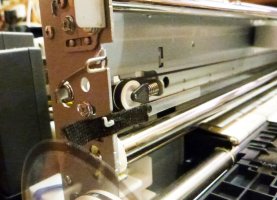 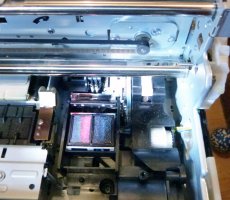 I wonder if gluing a short length of an old timing slit over the damaged part would be a good idea for a reliable fix.
Anyway, I've started to search spare Pro-10 timing strips out there ..

That’s what I taught I’d have to do, but thankfully I saved the timing strip before it got chewed up by the print head..
A

I have several timing strips from deceased Canon printers, including one for a Pro-9000, but I'm quite sure that the Pro-10 uses a different model.
A quick search online found no timing strips for modern Canon Pro printers, only for the Pro-9000 and 9500.
Last edited: Oct 21, 2022

I’ve got two spare redundant Pro 9500’s, so I would have tried using the strip from one of those first.. It’s always the Feckin same, if you had two left feet, they’d only stock right footed shoes..
A

Even if the strips for the Pro10 and Pro-9500 are exactly the same length, which I doubt very much, in all likelihood the coding pattern is different. I suppose that your Pro-10 would have gone bonkers with a Pro-9500 timing strip,

I spoke to soon, she just stopped working this afternoon, I went to change all the carts and it wouldn’t let me, then when I did, I keep on getting cartridge errors, but the printer was not checking any of the carts at that time..

Then I started getting 10 orange flashing LED’s, but that stopped when I unplug her from the power socket, turned back on 5 minutes later, now the newest one is four LED flashing and an support code error 5100.

From that error message I can ascertain that this can relate to the timing strip or the purge unit sensor switch, it would seem to me that the printer doesn’t know its arse from its elbow and has an issue with something, and doesn’t know what it is, but it still knows how to run cleaning cycles..

I’m going to leave it along for a few days and then try it again, but I can see I’m going to have to pull the Feckin thing apart again, to find the error that is not making itself very clear.. 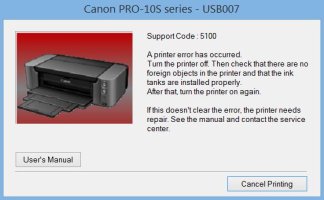 Update...
I’ve just got another error on my Pro 10 and it just might save its neck..

I’m getting the two LED lights flashing this time, and they cycle only twice, that’s telling me it’s got something to do with the timing strip..

At least now I have somewhere to look, so it might be worth taking the top off again..

I’m not particularly worry, because if it’s not an easy fix, it will be easier to reinstate the Pro 9500, and go back to something that’s much more reliable..