Unfortunately, I no longer have access to a microscope, either.

My S5-IS has a "Super Macro" mode that does a reasonable job once you get the hang of it, and that is what I used for these shots. I tried using my 5DII and 70-200 lens with extension tubes, but they were no match for the S5 in getting close-ups.

I wonder if the previous owner applied pressure from the discharge side of the nozzles, and damaged them mechanically with hard contact?

You can view the nozzles if you use a flatbed scanner and bump up the dpi. It works well. Same for Epson nozzles once you remove the printhead though.
I have seen damaged printhead nozzles as a result of burning but usually there is charred evidence surrounding the damage. On the heads without burnt marks usually they had been handled without the utmost care. Your guess as to handling causing this could be correct. Did rodbam not show us something somewhere recently?

turbguy said:
I wonder if the previous owner applied pressure from the discharge side of the nozzles, and damaged them mechanically with hard contact?
Click to expand...

That appears to be what happened.


mikling said:
You can view the nozzles if you use a flatbed scanner and bump up the dpi.
Click to expand...

DOH!!! This worked well, but the image was out of focus when the head was placed directly on the glass. I then remembered that when scanning negatives that the film holders keep the film above the glass, and mounted the head in one of the film holders - much better. The head was scanned at 12800 dpi and given some intensive sharpening in CS4. You can view the full high resolution scan here. If your browser can't handle the 150 MP image, download it and use another viewer.

For reference, here are Post 1 and Post 2 where photomicrographs of a different print head are shown for reference.

After my last post and before scanning the head, I tried to scratch it with my fingernail and a small screwdriver. My fingernail didn't have much effect, except when scraped inward from the edges - it was fairly easy to continue popping it loose where the damage was already started. As expected, the screwdriver could easily cause damage anywhere (and I did).

This isn't scientific, but laying a piece of paper alongside the broken section of nozzles and looking at them at an angle with a 10x loupe indicates that the silicon containing the nozzles themselves is about the same thickness as the paper (ca. 3 mils = 75 microns). IIRC, the nozzle diameters are on the order of 10 microns. Look at the high resolution image where the nozzles are broken out - this makes it appear that the ink channel behind the nozzles is quite large all the way up to the nozzles. The reason that this is interesting is that when cleaning single clogged nozzles you only need to clean to a very shallow depth (e.g. by setting the head on a Windex soaked paper towel). If a large "clot" or air bubble is located in the large channel supplying ink to the nozzles (as evidenced by a number of missing contiguous nozzles in your nozzle check pattern), then a completely different approach is probably required (running water over the head, dripping Windex onto the ink pickup, etc.). I suspect that many of the clogs that are reported are of the second type.

That print head is indeed "toast"!

grandad, I notice that many of the ends of the nozzles are the damaged one. It would seem very very coincidental that the ends alone would be damaged by accidental mishandling.
Now, I have not confirmed but I strongly suspect that the printhead from an i860 is mainly a smaller version of that of the i9900. Assuming that this is the case, if you go back to the pictures you had shown in some prior posts on this thread and observe the ceramic troughs carefully, especially at the ends you will notice something interesting and this will be more apparent to those who have witnessed strain tests during material testing. What exactly do these little caverns do?
Here is my hypothesis. Let's begin to design the nozzle as we would design it our-self. We see that the feed to the long trough is indeed in the middle or as close to it as phyiscally possible. One challenge is how to get the ink from the ends consistently. Remember that the ink pressure is negative at the nozzle level NOT positively pressured. Essentially we need to lay down a uniform ribbon of ink above the nozzles. Due to the surface tension we know that the ink will want to always pull back towards the middle..so how do we "stretch' it out. Simple....(not really) we need to hook it onto the ends of the ceramic trough and secure it so it remains stretched. How do we secure the end? By maximizing the surface contact at the ends AND as it turns out, the shape of the curve can be derived through analysis (differential equations) or creating an analogy of how a drop of liquid detaches when stretched.

So where am I going? The likely scenario is now laid out for you. ..ink detachment of ink at the ends ( when ink feed is a problem, it will tend to detach at the ends first), overheating due to no ink feed, brittle, easily damaged. Thus damage is localized at the ends. Two things you might then extend to....long nozzle lines = easier detachment. More sensitivity to ink feed. Narrow nozzles like an iP3000 head does not detach as easily. Second..never empty those little caverns at the end of the ink liquid line. Getting liquid back in there can take time and of course blowing air into the nozzle plate is a no no if you believe my hypothesis above. As a rule now, I always keep nozzles wetted and compressed air is not blown against the nozzles because doing so can force the liquid out of the cavity and air in.

Yes I remember that photo well. Below is one that I posted recently, showing the ceramic plate from an unknown Canon print head that had two sets of nozzles for C and M to allow for 2 drop sizes. Because of the different drop sizes, this is probably from a printer newer than the i860. Note that the little caverns at the end arent included on this ceramic plate. Why does this plate not have the caverns if they are necessary to the operation of a Canon print head? 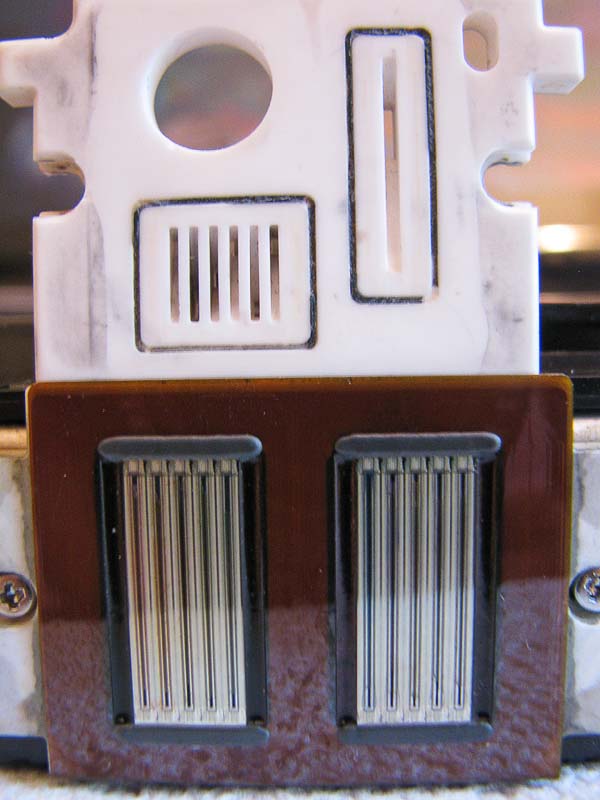 In this thread, the surface tension of ink was measured at about 50 dynes/cm. From the large print head photo, the slots under the nozzles were scaled at about 200 microns (8 mils) wide. A slot of this width can generate up to 0.07 psi due to surface tension. Using the 10 micron nozzle diameter given previously, the nozzles can generate up to 2.8 psi, or 40 times more than the slot. These numbers would seem to indicate that the pull that the nozzles can exert on the ink will dominate over the pull from the channels. It must be remembered that the maximum actual values will be lower, depending on the surface energy of the ceramic and silicon (which I dont know). These values also depend on maintaining a continuous liquid ink link from the cart all the way to the nozzles, with no air bubbles in between.

Also, in this post the following image was posted. Look at the upside-down cyan stripe at the bottom printed from the right to the left as the image is displayed. The middle nozzles ran out of ink before the end nozzles, not the other way around. I have seen the same thing when I recently fought with a partially clogged PM channel. 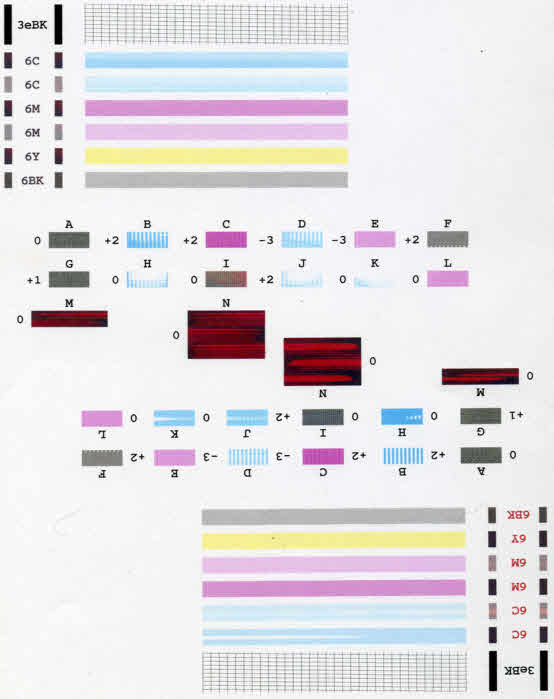 I have two problems with the overheating theory:
1. All 10 sets of nozzles were damaged, but only 8 are used in this printer. Two of these sets of nozzles were never under power.
2. I realize that many people contend that printing without ink will quickly kill a print head, but I have run jobs with over (30) 8x10 prints and where a cart stopped feeding after only a few sheets. If these print heads were that fragile, I would have blown the head, but after the cart was replaced the print head showed no signs of damage. Im not saying that we should print without ink on purpose, only that it may not be as bad as some think.

The length of the run of the nozzles I would think has an impact on whether the caverns are required or not. Two things I would postulate would dictate the requirement of caverns to stretch the ink, the maximum flow rate required and the length of the run. On the printhead you have shown, this looks like one from the class of an iP4200 or iP3000. These are slower printers and in addition these both use only full strength CMY/k. On the photo printers like the i860, that use the PC, PM and are quite fast, the required volume of PC and PM is significantly greater than if C and M was solely used. Unfortunately I recently threw away a couple of MP970 printheads. These appeared to use the same printheads on the dye side as those on the 6600/6700.
The caverns must have a function. I cannot see whether the i9900 head has the caverns , but it might be a candidate for an autopsy?

If the aspect of printing on empty is not as destructive as we had thought , then the failure of printheads might be only attributed to mainly random events.

The mystery deepens because if all ten were damaged not due to printing, then the coincidental nature that damage occurred only at the ends seems so highly unlikely that no chance event could be that perfectly placed. So what might have caused the damage?????? We've discovered the plate is quite robust mechanically, so it must be something more localized I would think. Could it be simply catastrophic failure of the electronic heaters that just happens by chance?

mikling said:
I cannot see whether the i9900 head has the caverns , but it might be a candidate for an autopsy?
Click to expand...

The nozzles were bonded to the ceramic plate very well, and I had to almost destroy the ceramic plate to get them off - note how the dividers between the ink channels snapped off just below the top of the channels from the force required to remove the nozzles. The residue left on the top surface shows the quality of the bond.

Because I was causing so much damage, I stopped as soon as a single channel was uncovered. In any case, I don't see any caverns in that channel. 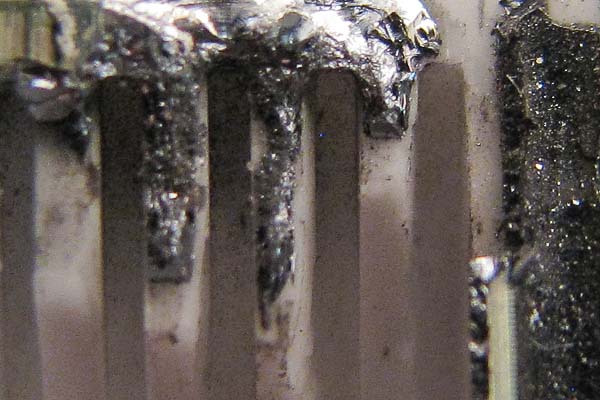