aboulfad said:
OEM carts that came with the PRO-100
Click to expand...

These would be "setup" cartridges.

If they reset and work for you then happy printing.

If they present with issuses then get a complete retail OEM set of cartridges. You may be able to find once used set of empty cartridges. Flush them before refilling, rest and print. Unless you plan on flushing the Yellow OEM rigorously to avoid Yello Gello then get a CLI-8 Yellow cartridge and swap your chip onto it.
G

Same problem here, but with a PRO-10. (Thought about creating a new thread, but it seems the issue is similar to this one.)

Mix of Setup and OEM carts, all refilled and reset multiple times. I've been printing for a couple of days with this set, no issues. Today I pulled up the IJ Printer Utility to clean the heads and do a bottom plate cleaning. I did 3 bottom plate cleanings in a row, but there was still just a bit of residue so I set up to do the fourth one. That's when the "Support Code 4100" error popped up. I can still print (using Affinity Photo and Qimage), but when I try a bottom plate cleaning the error code comes up and the utility will not allow the cleaning to proceed.

Have never updated printer firmware, largely to avoid just this kind of an issue.

Error 4100 comes up when you changed a cart during printing. Should be cleared by the resume button.
Only informative IMO, but it can create a chain of errors (meant to dissuade users from refilling).

You do not have to clean your printer every Friday, stop unnecessary fiddling with these utilities.
Use your printer to print.

Why did you have to do bottom plate cleaning, and what is the residue you mention ?
These residues are NOT the wet ink patches you see in the sponges under the plate after printing borderless, harmless and not removable.

There is no indication Setup carts should behave different from the regular OEM's bought afterwards (although the printer recognises them).

PS: something says me you better ignore @aboulfad, he tells the same error stories on other fora

palombian said:
...
PS: something says me you better ignore @aboulfad, he tells the same error stories on other fora
Click to expand...

Maybe you meant to say ignore the topic that I brought up. The error is very relevant to those that refill and as @mikling explained it may be there are still some routines that are not cleared during cart reset.

So yes, we can ignore the issue as long someone does not really need that bottom plate testing.
G

palombian said:
Error 4100 comes up when you changed a cart during printing.
Click to expand...

I did not do that.

Should be cleared by the resume button.
Click to expand...

It didn't. I've even tried powering down the printer (which I never do), and that didn't clear it.

You do not have to clean your printer every Friday, stop unnecessary fiddling with these utilities.
Click to expand...

I don't. The cleaning was done for a specific reason: to remedy a print quality issue.

To avoid further confusion, the PRO-10 maintenance on my WIN10 PC looks like this:
Bottom plate cleaning is first on 2nd row 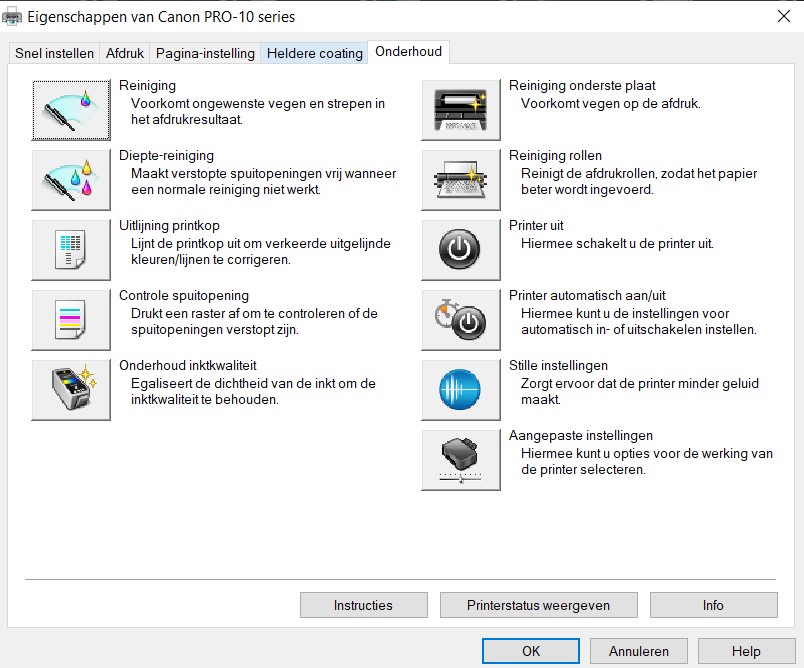 Have you been on a certain point where you inserted an empty cartridge ?

I would change the whole set by full and resetted carts (if you don't have enough carts removing, refilling and resetting one by one works).

Is the spool empty ?

I've got the 4100 error yesterday on the PRO-10 when launching a bottom plate cleaning.
No setup carts in the printer (although the other set has 2 of them and never caused this).
Went away after restarting the printer.

I made over 100 prints in 2 days and left the printer powered on overnight, something I seldom do.
Also replaced only 2 carts i.o. all together as I use to do.

Nothing changed in 2 years I've been using the printer.
Just one thing: sometimes the resetter doesn' light up long enough, I do it a second time in this case (already cleaned the contacts).
As @mikling suggested, most probably not all bytes are the same as in a virgin OEM chip.

Or maybe it is just a bug that occurs with genuine (not resetted) carts too.
If it happens only now and then in a seldom needed function I can live with it.

I don’t know anything about bottom plate cleaning because I’ve never done any, but a better option would be to flood the purge pads every so often as it needs more of a clean than the bottom plate.