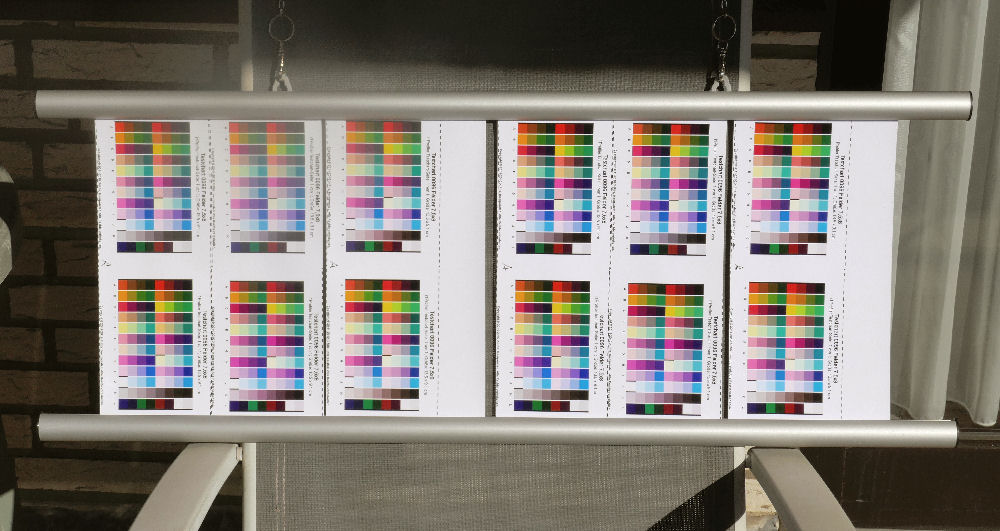 Nice setup and very effective too, I await your results..
P.S. make it two , to be sure..

The patch sheets now have been exposed to the environment for 4 weeks with sun, ozone, varying temperatures etc.

Previous assumptions and comments are getting confirmed that the longevity even of OEM inks varies very much between the ink types, similar to the Wilhelm Research test report of inks for tanksystem printers.

Wilhelm Research is calculating their results into a 'Display Permanence Rating' which allows comparison between their findings.
I'm using a data analysis tool by X-Rite in their i1Profiler package which let me compare the data of patch sheet scans taken at different times - in this case at 1 day as the starting point and at 1 week and 4 weeks again. This tool averages the Delta E color shifts without adding additional weight to the color or the magnitude of the shifts. There is no simple way for me to recalculate these numbers into some Display permanence ratings, I just can do relative comparisions which ink performs better after some time than another ink.

Color patches have been printed onto 2 diferent papers - a Canon premium glossy PT101 and a no-name 240g glossy paper - PE/RC type, both papers perform quite similar in this test run.

I'm testing the Canon GI-50, GI-51 and GI-53 bottled inks used with verious Megatank printer models, and I have inlcuded the HP GT-52 and HP31 inks used with some tank system printers but which are much less popular in Germany. The GT-52 ink is listed as well in the Wilhelm research report. The GI-53 ink the the Canon Chromalife 100 ink. 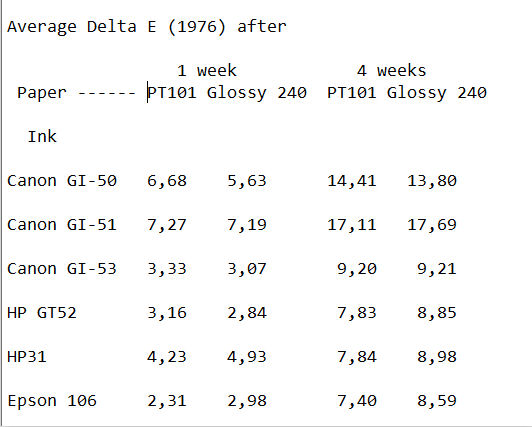 It is a well kept secret by Canon that the majority of the Megatank printers run with pretty weak performing inks for the longevity, only the G550/650 models with the GI-53 inks stand out. I have not tested other Epson dye inks in this test run, but the bad situation is that most Epson inks are about as weak as the Canon inks - 664, 102 and more, and it's only the 106 and 114 inks for the premium Ecotank printers running with Claria like performance.

Both the HP31 and GT-52 inks perform very similar to the Epson 106 and GI-53 inks, HP delivers very good inks to their customers for all their tank system printers.

This test confirms my recommendations for Canon and for Epson users of tanksystem - Ecotank - Megatank printers to pick the best dye ink you can get for your printer - a Canon GI-53 ink is not much more expensive than a GI-50 ink - or a Epson 106 ink is not much more expensive than a 102 or 664 ink. Or look for the HP inks as an alternative (but you may need a color profile or some driver adjustments since the hues of the HP inks are somewhat different).

I have not tested any 3rd party dye inks at this time, I don't see a need for it , I have not seen any 3rd party ink over a long time which comes even close to the OEM inks in regards to longevity.
Last edited: Mar 20, 2022

Thanks you @Ink stained Fingers,

for your very special ink fade tests, now when MegaTank printer owners ask about better longevity, we have the answers here....

The Main Premium 3rd party ink supplier on here whom shall remain nameless might dispute your findings.. But if he has any Feckin sense he wont !

It's the user who needs clear information so that he can make a good purchasing decision balanced on his needs.

has a much wider portfolio of products overall, and I wish him all the business he can get , and I'm sure - I know - he would consult his customers accordingly if asked for.

There is one little caveat to my recommendation above swapping inks - the user should be clear which type of black ink he is currently using - dye or pigment - and which ink is the most usable for him.
Last edited: Mar 20, 2022

The Hat said:
I wonder how much better is at withstanding fading compared to other 3rd inks..?
Click to expand...

A friend of mine deinstalled his old Brother DCP-195C printer which got some persistent nozzle problems, I assume that he didn't print enough; he gave me his leftover inks he used for refill into large refill cartridges, it's not much but about 1 -2 cartridge loads for my WF2010W I use for ink testing. It's some ink by octopus-office - with their brand name 'Octopus Fluids' and produced in Germany, and there are some drops of Inktec inks E0010-100M spec'd for 4 color Epson printers - CMYK all dye - originally in 100ml bottles.
He installed an Epson ET-2715 printer instead which got sold with a pretty good discount around Christmas, this model is using the Epson 104 inks - CMYK all dye but he did't want to mix them up with the old inks.

Inks in larger containers up to 20l are listed as well for whoever needs that much ink of this type - most likely not an enduser.

But this gives me the opportunity to place these inks under the sun for a fading test, this is the first time since quite a long time that I'm using some Inktec inks again.

Ink stained Fingers said:
But this gives me the opportunity to place these inks under the sun for a fading test, this is the first time since quite a long time that I'm using some Inktec inks again.
Click to expand...

This test will be interesting because any Inktec inks that I have used have always been ok and never tended to clog up the heads on my Canon printers, I can’t remember why I stopped using them, I think the suppliers went bust or sold up..

The color patches are placed outside for the next test, I'm using for this test 2 different papers - the budget PC/RC glossy paper with 240g and a cast coated Koala Glossy 240g since I would assume that a user of low cost refill inks will not tend to use an expensive Canon PT101 paper. The Koala Glossy 240g is distributed via Amazon and bulges much less than the LogicSeek I'm using since quite a while, the LogicSeek paper is cheaper than the Koala paper and comes in a nice and sturdy box. This test is a fading test, I cannot test any (non)-clogging characteristics of the InkTec ink in this test.
Last edited: Mar 27, 2022

The current fading test let me measure and compare the gamuts of the inks under test, these are the gamut plots at mid luminance L=50 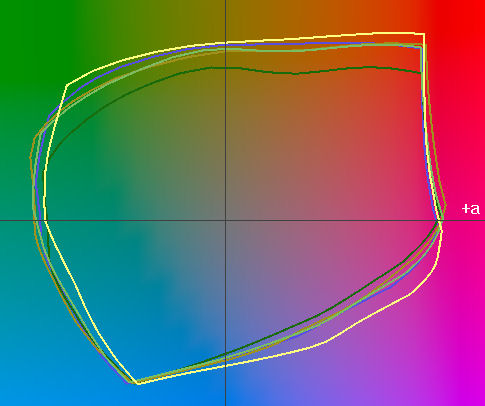 The yellow line shows the gamut of the Epson 106 ink, the smallest gamut - black line - comes from the LC1000 inks from OctopusFluids, the plots in between belong to the InkTec E0010 inks, the Canon GI-51 inks and a Chinese inkset for the Epson Surelab D700, all gamuts are pretty similar overall, the paper for these plots is a Koala 240g cast coated glossy paper.

I couldn't wait any longer and scanned the patch sheets after 5 days, the findings are prelim. at this time but don't show any big surprises.

All inks fade slower on the PE/RC glossy paper than on the budget cast coated glossy paper (with the paper back side) but be aware that this is a snapshot of just those papers under test, there are plenty more OEM and 3rd party papers on the market.

The other inks - Canon GI-51 - Octopus Fluids LC1000 - InkTec E0010 inks as a substitute for the Epson 664 bottled inks - a D700 Chinese ink for the Epson Surelab prof. printer - all perform quite similar and fade much faster than the 106 inkset. There are differences between these inks but not dramatic in any direction.

Be aware that I'm not testing here the full spectrum of InkTec or Octopus-office inks but just an accidental combination of inks as they are waiting in my cabinet to print.