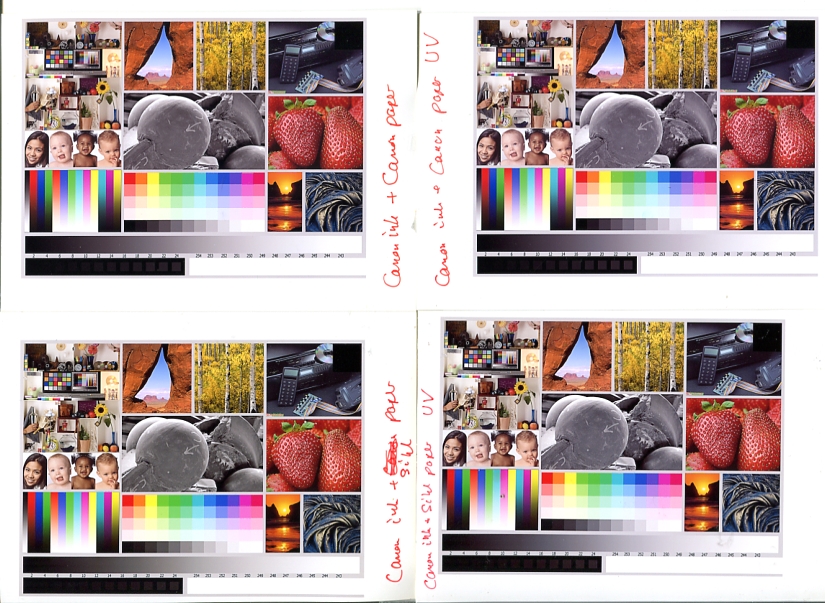 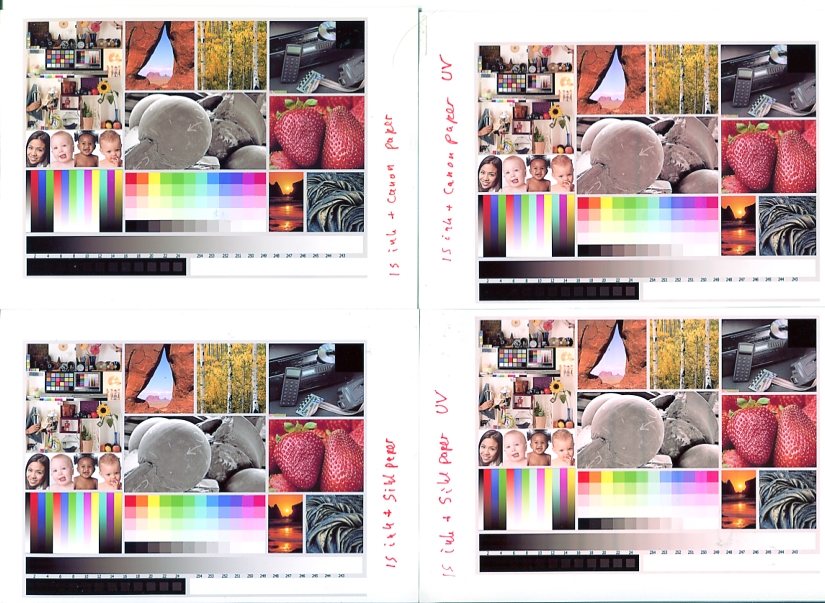 The blue/green vertical stripes in the faded B/W images are caused by shadows of the protective grid in the UV lamp: 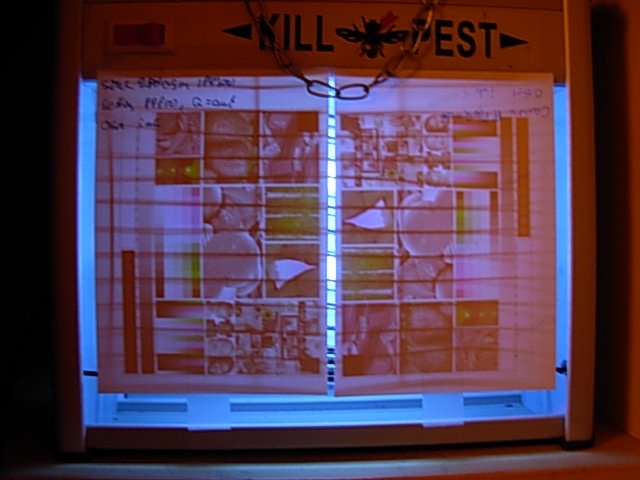 It seems that the Canon OEM inks are superior in fading resistance, but they are also very much more expensive than refill inks.

I'm not so knowledgable about Canon inks, but Canon offers a wide spectrum of large format printers, ImagePrograf models, of which some can use dye and pigment inks alternatively. Similar to the situation with Epson inks buying a particular ink in a bigger cartridge and refilling the ink into smaller ones makes it much more affordable - the bigger the cartridge the steeper the discount on the price/litre. Such a deal works for Epson inks - Ultrachrome - for those who want to stay with Epson inks , at a much lower price than with small cartridges. I would assume that trick would work as well with Canon ink - somebody should try it starting with one ink.

I did that with the Prograf 6400 OEM cartridges and yes it is cheaper than the small cartridges (50% saving) but the savings are still much bigger with 3rd party inks..

I'm interested in canon OEM not only because of color matching and longevity. After I had at some burnt printheads I am arguing with bubblejet thermo printheads. Well, epson cloggs but canon burns, if you don't pay attention. And since I read about non compatible piezo epson inks for canon and boiling points of fluids I am more aware of these aspects as potential "bubble jet nozzle burners"..

The Hat, thanks for confirming that the idea of draining bigger cartridges actually works for Canon; there is definitely the wish of some to stay with OEM inks but trying to find a tricky way to save some money, some may want to utilize the good UV performance of OEM ink with a printer which does not take the more cost effective cartridges, and some other just don't care and refill with the cheapest ink available. Whether they all save at the end.....o.k., that's another thread..
When it comes to fading, I did some tests, partially reported already before, I tested a
'UV resistant' ink from US/Amazon, that actually was a fast fade ink, useless in this respect.
I tested an ink from China/Alibaba 'UV resistant', CMY perform somewhat better than Coralgraph dye inks, except black, that has turned into a yellowish brown after 3 weeks, by far the best performing dye inks , non Epson OEM, are inks out of cartridges for the Fujifilm Drylab printers DL100 etc, virtually no change yet in 3 weeks out in varying springtime whether, sun, storm, humidity, but no direct rain. Those inks are definitely a magnitude different to all the other inks tested, and run at about 25% of original Epson inks (in small cartridges). In a way they are OEM inks as well, but by Fujifilm.
Epson does not offer at all dye inks in larger cartridges for their large format printers.
Last edited: Mar 31, 2015

If you choose to use OEM or 3rd party inks in a Canon printer it’s debatable whether one will make the print head last any longer then the other, that said.

When you use OEM dye inks you are paying a premium for the privilege and for that you get good colours and a reasonable amount of print longevity and that would seem to satisfy quite a lot of end users, but.

When you use 3rd party inks your colours are slightly different and the longevity of your prints is, well let’s say a lot shorter that OEM inks are, and here’s where that But come in.

You can print all day and a lot more besides (cost wise) which most refillers love to do, and the colour issue becomes a delightful work around and the longevity is overcome by a simple reprint, and if your print head does roll over and dies, you’ll have saved enough to get several new ones.

It’s a matter of choice which inks you choose to use but one thing is for certain your print head isn’t going to last any longer just by using OEM ink, that’s my opinion.

My latest print head didn’t die from exclusively using 3rd party ink but from a mechanical problem caused most lightly by wear and tear..

The Hat said:
...and here’s where that But come in.
You can print all day and a lot more besides (cost wise) which most refillers love to do, and the colour issue becomes a delightful work around and the longevity is overcome by a simple reprint, and if your print head does roll over and dies, you’ll have saved enough to get several new ones.
...
Click to expand...

There is still a "But" more: Sure you can reprint faded prints for almost no costs - but how often would you really do this? And more important: what about prints you give away (not to speak about purchasing them) - would you like to receive photos as a gift which will fade in less than one year, or even one month?

- both on tecco photopaper pearl 250g

- both on FA baryta 325g
(the blank side isn't fade to white, but simply a printing error, I pressed "cancel" for no reason, still learning the settings of my new 3880)