Further to the profile attached to post#17 of this thread, these images illustrate the profile performance. 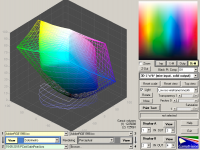 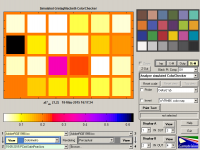 The last two are of prints from the Canon 9000 II on Satin Pearl paper using the profile and the revised (new magentas) PC inks.

The B&W test image was printed in full colour mode, simply relying on the (957colour/335black&white patches) colour profile's B&W performance for the result, no corrections were applied.
Last edited: May 31, 2015

3dogs said:
To answer your valid question related to editing unseeable colours that exist in one space but not the other I had hoped that my comment relating to the fact that no VIEWER is ever going to know how much colour is shifted one way or another in either a print I enter in a comp or post on this site because there is no reference point. Provided the colours are within what a viewers eye may judge to be credible all is good, with or without much profiling.
Click to expand...

@3dogs regarding these unseeable colours, I seen two photos of a child taken in a public park by her father who was testing out his all new Canon 7D MK ll.

Anyway here’s my story:- this kid had a green dress and one of the photos were taken with her facing the sunlight and the other was shot with her still facing the camera but with the sunlight behind her, here is a sample of that colour.

Now the interesting thing is this child’s dress looked different in both shots because the sunlight was coming from two different directions and this can be clearly seen when the two photos are printed side by side on one sheet.

This camera is considered to be the very best and if you were actually standing beside this guy during the photo shoot you would not be able to see any change in the dress colour whatsoever, unless of course the child was standing in shade, which she was not.

So my question is how does one determine which colour is the correct one ? when both of them are clearly different shades of green in the photo, but the thing is, the human eye is also affected by this different light source but the brain compensated by seeing the dress as exactly the same colour, which clearly it’s not.

This same effect can be replicated by painting your house on two sides and then altering the paint colour like the sample above was, and then painting the other two sides and I can guarantee nobody would notice the colours are different for certain.

P.S. unfortunately I don’t have these photos to hand any longer..

as you already state - perception is all there is, and the color as you percieve the green may not match the colorimetrically correct color. And the color as seen through the Canon sensor may not match it either , the sensor RGB filters have a different spectral performance than the 3-stimulus color curves of your eve. Your vision system, the 'white balance' is dynamically changing as well, and you cannot recall that setting at the time the picture was taken. So there is no 'right' color. Once you start reading a little bit about color perception, influence of local contrast, of brightness etc you will wonder that it is possible at all to have a process to recreate the image of a particular situation , and the perceived color impression and balance appears still to be pretty good, just think about a limited gamut of a printout, or the mediocre contrast of a printout - less than 4 f-stops on the paper, and not 8 or 10 f-stops as your image file. And there are many more of those effects.
Last edited: May 18, 2015

Two excellent posts above....in one corner @TheHat and in the other corner ( on the same side of the "ring") is @Ink stained Fingers" we are all saying very much the same thing..... however, put the smallest hint of green into the face of the child and it is IMMEDIATELY obvious!!
To me the white balance shift and its effect on the green dress is not vital, the shift in colour/tone is not referenced so no one notices.
BUT
Sit at your computer and pull up that same image and your memory does have a reference point (even if it is wrong), that referece is so strong that you WILL adjust the colour or throw the image out as a reject.
THEN
If you print, the output depends on how close your adjustments are to laying down the ink on the paper in such a density and combination that it meets your expectations.
Thus the Artisan (printer) references his own work to match his/her expectation.
From then on no viewer has a reference...
However,
Sharing printed images is no longer the sole option, we share via electronic devices of all kinds.
To me this is where calibration becomes vital......some time ago I posted an image of a pool of water at the base of Ayres Rock (Uluru) the image was dominated by reds, black of varying density and turquoise also of varying densities.....how many of the devices that displayed that scene did so using the colours of my image? I believe that number would be VERY small.
Even a print depends on the viewers colour perception.....the nearest we get is by assigning a number to a colour and testing for that so if I add a patch at the foot of the image and assign values to some of the key colours used folks that can read those numbers and adjust their screens MAY get closer than those that can or do not.

An interesting discussion but I think we are in deep water when we start talking about "perception". I am not sure that in the context of a printer forum perception is entirely appropriate. A printer knows nothing about our perception of colour. All it is required to do is to reproduce, as faithfully as possible, the colours that are sent to it, pixel by pixel. And the colour of each pixel is decided by the person editing the image, however small or dramatic the edits may be.

Likewise, the camera knows nothing about our perception of colour. It simply records the colour in a scene and interprets it according to the recipe put into it by the manufacturer. Can the camera capture colour accurately, and can the printer reproduce it accurately? How accurate does it need to be?

Here's a simple little experiment I just carried out. I have a colour control strip that I use for visual checking of printer performance. I photographed this with my Lumix GH3 with the camera "style" set to Natural. I opened the JPEG file in Photoshop and viewed it on my calibrated/profiled monitor. I felt that it was a bit too dark so increased the exposure by 1/3rd of a stop - purely my visual judgement. I did not change the colour balance or contrast. I then scaled the image to match the size of the original and printed the result on my profiled Pro3880.

Is that percieved to be good enough? Has the overall system of camera>monitor>printer done a good enough job in capturing the scene? Colorimetricaly it's not brilliant, but I suspect that most people would be hard-pressed to point out the colour errors in the final print were it not placed side by side with the original.

Great post. It contains two excellent points to put on the table, both camera and printer have no conscious perception, but they do have variability, It was said of the 3880 that it was the first Pro-sumer printer to guaranteed to output the same result one machine to the next, given a common controlled source. Marketers said that I could send you a file to print and your 3880 would print the same as my printer......given that we are using the same colour space.

Your quick test, viewed on a tablet says the colours are within acceptable limits so I would accept a print. However, I may open the same image on my calibrated screen in PS and measure the values...if they differ an anal-ist may reject them........I am not sure that I would.

"Every print depends on the viewers colour perception" I added this because as far as I am aware there has been no test able to determine if everyone sees a known colour of a given value exactly the same. Although having said that I am put in mind of the colour blind test......does that disprove my assertion I wonder.
Anyway, all I was saying there is capable of being simplified to the extent that when all is said and done @Ink stained Fingers point is good, the actual colour output of as object depends on the value of the light falling on it at the time we set about to capture an image. Thus the controlled environment of the Studio is the "safest" for portraits????
Last edited: May 21, 2015

3dogs said:
..............................I added this because as far as I am aware there has been no test able to determine if everyone sees a known colour of a given value exactly the same. Although having said that I am put in mind of the colour blind test......does that disprove my assertion I wonder.
Anyway, all I was saying there is capable of being simplified to the extent that when all is said and done @Ink stained Fingers point is good, the actual colour output of as object depends on the value of the light falling on it at the time we set about to capture an image. Thus the controlled environment of the Studio is the "safest" for portraits????
Click to expand...

Yes I agree, when you are making judgements it is very easy to forget to check whether the display is correctly profiled (try some of the web based colour blind tests and the colour temperatures they suggest) or that the illumination is correct for the print.

Have now finally installed ColourNavigator and used the Spyder to recalibrate. To be honest I cant see a difference in the ourput...and that is either a very good thing or a diaster! what I DID do tho was multiple calibrations as suggested.........