Ink stained Fingers said:
I can't unscrew the top from the GI-53 bottles - I tried - it's different to the Epson 106/114 etc bottles; I'm using a syringe and a longer needle with a blunt tip to pull the ink out of the bottles - for test
Click to expand...

Good to know! I little bit of a hassle, but perfectly doable.
BTW, I am aware of the fading tests that @maximilian59 and you have done. That's is a signicant part of the reason behind me pursuing this path

Ink stained Fingers said:
The information that the GI-53 inks are indeed Chromalife 100 inks is pretty elusive
Click to expand...

The American equivalent is GI-23 and it is advertised as ChromaLife 100 ink. I doubt Canon would use a different ink formulation for the same printer labeled for the European market.

Why there is an issue with labeling the GI-53 ink as ChromaLife 100, even in the printer's literature, is a mystery.

However, there can be little doubt anymore that the GI-53 ink is ChromaLife 100:

pablo_n said:
the ink could have some chemical tricks to prevent its use in other printers.
Click to expand...

Purely speculative that Canon planned this. If it was planned then why not for all the inks?

There have been rare reports of issues with using a different Pigment Black but the evidence of a chemical reaction occurring is awfully thin to be essentially only a passing thought.

There is no argument that a reaction occurred with refilling a CLI-42 Yellow with Precision Colors aftermarket replacement ink, though other aftermarket ink suppliers said it didn't happen with their ink. Our former Moderator The Hat named it Yello Gello. And there were subsequent reports of a similar reaction occurred with a Magenta of a different model cartridge, IIRC.

When something unknown happens we think of the possibilities. At the time Peter posted his issue we were in the first year of Yello Gello. Maybe this led to his speculation of a reaction.

Similarly important is if a different Pigment Black ink in that printer causes an issue from settling out of pigment particles or if larger particles of pigment than the print head (nozzles) can manage causing an ink starvation issue. Neither of these are due to a chemical reaction but may lead to damage of the print head nonetheless. I discussed this in my first post.

I do not see the immediate need to use a different ink than the GI-590 Pigment Black (PGBK) that comes with the printer. ChromaLife is only the Dye-Based inks, and your Dye-based inks are CYM. 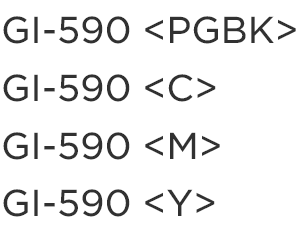 just mentioned one time here, but Canon is pretty reluctant otherwise to mention it although it makes a huge difference in longevity even compared to their GI-590 bottled inks. It is as such not actively promoted and not marked on the bottles itself.


stratman said:
Why there is an issue with labeling the GI-53 ink as ChromaLife 100, even in the printer's literature, is a mystery.
Click to expand...

I'm afraid we'll never know why Canon is hiding an excellent product feature that much. There must be some thinking in the marketing minds we cannot follow, Epson did the same with the 106 inks of the ET-7750 , only a 3rd party test revealed the fact that the 106 ink was as good as their Claria inks, and only the inks of the successor ET-8550 are marked as Claria ET inks since recently.

stratman said:
I do not see the immediate need to use a different ink than the GI-590 Pigment Black (PGBK) that comes with the printer.
Click to expand...

You have the choice - to use the GI-590 matte pigment black or the GI-53 dye black on a 4 ink printer, you can use both on a 5 ink printer

I do not know what the Canon web site page for the G620 printer stated when it was first online, but ChromaLife is mentioned prominently and also more than once as of today.

The GI-23 ink also advertised being ChromaLife 100, at least it was when I searched it in September 2021.

Maybe Canon Euro dropped the ball on this one.

Ink stained Fingers said:
You have the choice - to use the GI-590 matte pigment black or the GI-53 dye black
Click to expand...

For no other reason than because you can?

stratman said:
Maybe Canon Euro dropped the ball on this one.

When I search this page for 'Chromalife' I don't get any hit, I just get a super story about a great user experience and all that

'6 Flaschen mit hoher Reichweite mit farbstoffbasierten Tinten (je 1 x Bk/C/M/Y/R/GY'
and it's pretty much the same on the other Canon-EU product pages in other languages.
We won't know and won't get to know why Canon is doing it this way - there is no easy test possible

stratman said:
do not recall a report of a GI-590 Pigment Black ink mixed with a different Pigment Black ink causing a reaction like the Yello Gello issue. This would be important information for the forum.
Click to expand...

I cannot recall experiencing such effect - I was testing quite a lot of black inks - matte inks - some time ago for the black level to compare it against the Conecolor 'blackest black ink ever'; I did not clean, wash or rinse the refill cartridge I was using, I just emptied it and filled it up with the next ink, but all this limited to black pigment inks , I didn't switch or mixed Canon yellow inks.

stratman said:
For no other reason than because you can?
Click to expand...