I have been using Canon's i9900 printers for many years and now have several working spares as backups. These printers are quite reliable, but every few years I blow a print head (5 orange blinks or regular patterns of a missing ink) and have to install a new print head. The original print heads were QY6-0055 and were available at about $80 until they were replaced with the QY6-0076 print head. The boxes for the early QY6-0076 heads were labelled with all of the compatible printer numbers (9900i/i9900/i9950/iP8600/iP8500/iP9910/Pro9000). These QY6-0076 heads were available from Canon for under $100 until a few years ago when the price suddenly rocketed to $200.

I recently blew a head and called Canon after installing one of my spares and was surprised to find that the price for the QY6-0076 had fallen to $80 from $200. Unfortunately, Canon no longer lists the i9900 as a compatible printer for the QY6-0076 and now lists only the Pro9000 and Pro9000 Mark II. One of the eBay listings for the QY6-0076 states that this print head has been discontinued and that Canon is selling out their stock. At least one seller implies that the new heads will work on "some" of the older printers, but not all. I can't find the link again, but someone claimed that Canon pulled these heads from production a few years ago and that when they were made available again, Canon changed the design and removed the older printers from the "compatible with" list.

Has anyone had experience using one of the QY6-0076 heads with only the Pro9000 printers listed on the box in one of the older printers? If so, I will look at this as an opportunity for an "end of life buy" and stock up at the lower price. Does anyone have any further information on the history of this print head that would explain the swings in price? Or, is this just a ploy by Canon to kill off the older printers as their print heads fail (my guess).

The supplier in the UK was www.crc-tasktron.co.uk

However there has been a similar change, recently they seem to have moved up and down:-

They also cover a wider range of old models, if you look at the web site. Old stock?
Last edited: May 4, 2016

Emulator said:
My most recent purchase of a spare QY6-0076 in the UK last year, states For Pro9000/Pro9000 Mark II and cost about £100. The retail price had not changed since the previous purchase 2 or 3 years ago.
Click to expand...

Did the box look like this? If so, have you used the print head from that box, and in what printer?

I finally found the link that made the claim that the print heads from these boxes aren't compatible with the older printer models - here is a screen shot: 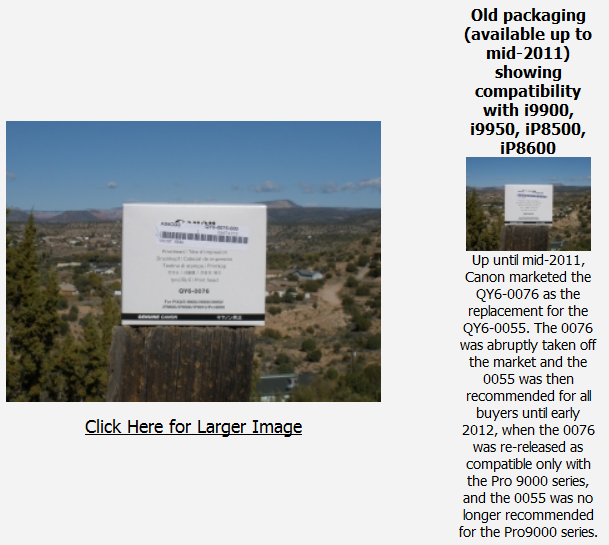 Also, some eBay sites claim that the qy6-0076 has been discontinued, putting time pressure on purchasing spare print heads.

Thanks for the info - I never noticed that there was a revision number on the part number.

Before digging into the details, I ordered one of these heads from Canon about a week ago and it just arrived yesterday. It has a revision number of "-000", the same as a spare print head that was purchased in 2013. Even though 2013 is later than the 2012 transition date given in the link above, the revision number of "-000" gives some assurance that the current print heads will work in the older printers.

However, it would still be reassuring to hear from someone who had success with one of the newer -0076 print heads in an older printer so that I can make an "end of life buy" with confidence.

Why not take advantage of the offer, send an email, they should know the answer.
"If you are unsure which print head you require, please contact our helpdesk at info@crc-tasktron.co.uk or call us on 01483 776060 our opening hours are 8.30-5.00 Monday to Friday.

All enquiries will be answered within 4 working hours. (Standard Rate)"
Last edited: May 4, 2016

www.crc-tasktron.co.uk
Those guys don’t send anything outside the UK..

I sent a message to Tasktron to get their input (even if they won't ship to the US), but I had previously contacted Canon and they told me that Canon doesn't list the QY6-0076 as compatible with an i9900. I told them that in the past it was listed as compatible, but they just repeated the company line that it isn't listed as compatible. Even if Tasktron gives assurances that their parts work in the older printers, I would have to wonder where they get the information that allows them to give such assurances.

There are several of these print heads listed on eBay for about $100 plus tax and shipping (some for far more), but the Canon parts sell for $80 including tax and shipping. There is also the absolute assurance that I will get a genuine Canon part when ordering from Canon. I remember some discussions a few years ago about people receiving refurbished parts from China in OEM packaging, and I prefer to avoid any such potential problems.

I would still like to hear from someone who is running one of these print heads (shipped in the new boxes that don't list the older printers) in an older printer.

@Emulator Tasktron didn't have the i9900 listed on their system. When asked whether their print heads would work in an i9950 they replied "we are not entirely sure if the European version of the QY6-0076 part will be compatible with a US model i9900".