I'm currently running a small test to check how much a gloss optimizer overprint on prints with dye inks changes - improves the fading of these inks. 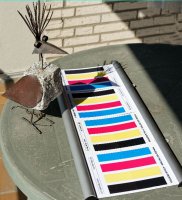 I printed the color bar patterns a few days ago, on 4 different glossy photo papers, first changes are becoming visible already after a few days - yes, a GO overprint improves the ink fading. I'll have some numbers to compare in a few days. The inks used for this test are a mix of various and no-name inks - OCP - Chinese - leftover of L300 inks. I may run a 2nd test with the Fujifilm DL inks later.
Using a GO overprint on dye inks is not typical, and Epson printers are not equipped for that, I'm using a printer running dye inks e.g. R265 or WF-2010W - and do the GO overprint with a R800 for these tests. There is another side effect - the GO reduces the sensitivity of glossy dye prints against fingerprints and changes slightly the overall look, darkens the colors and changes the look of the paper white. It would be necessary to run a separate icm-profile in such case.

When I turn on the printer to overprint the Glop, I tend to Glop every print I can get my hands on, dye and pigment, but so far, I can’t see any improvement in any of the dye prints that I coated, it’s not visible on the surface of the paper, but on the other hand there is a huge improvement in the pigment prints.

I’ve even tried laminating the dye prints after applying the Glop but they still fade just as fast if I have left them out to exposed to high natural daylight, in normal conditions they are fine, in fact very little fading..

The effect of the GO overprint becomes visible already after 1 week of exposure to the outside.

The top part is GO covered, this is the Sihl/Aldi paper, the unprotected black is already turning dark brown, the left part is the reference print kept in the dark; it looks very similar on the other papers - Netbit/Aldi, Tecco PG230 except the cheap cast coated LS180 which does not show much of an effect of the GO at all, I'll show it next week. I used in the last years a budget cc paper Labelheaven, but that was bending slightly from the environmental humidity once the package was opened, and it was not feeding well/at all in the L300 in that condition so I phased it out and switched to this LogicSeek paper, about the same price, this one stays flat and runs well on the L300, but it turns out now that the fading performance is poor...
Considering the effect of the GO overprint I could assume that it protects the paper surface with the dye inks more against ozone than against UV, I'm doing this test outside. You typically have less ozone inside the house, thus a less protecting effect which could support The Hat's findings of a lesser GO effect with his test, aside from the difference that he is using more stable pigment inks.
I'm recording the lightness numbers of the color patches so I can see in the next weeks when the GO covered areas reach the same level of lightness increase as the unprotected areas now, so I'll update the findings in about a week.

I’ll post another test print up tomorrow, it’s the one I’ve had in a south facing window of my shed for a year, it won’t be very representative because who would put their prints in a sunny window anyway.

@Ink stained Fingers, why don’t you try and put a coat of GO on your paper first then apply the dye ink ?

GO first - I did that - accidentally some time ago - the GO is clogging up the microporous surface of the coating and the paper does not take much ink anymore when printing.

That’s very strange, because I did some photos on glossy paper (Sihl) with the GO coating going on first and the finish was much the same, it didn’t make any difference to the overall look of my prints, you might be using to much GO.

I also used an iX7000 to output blank copy paper which goes through a bath of Canon PGI-9 clear GO and then tested that against untreated copy paper and found the image and text printed much shaper, far less bleaching occurred.

I love to Feck around with unconventual printing techniques and try to take the inkjet printer to where it doesn’t want to go, it can cost the odd print head dough..

There are many variables - like the paper coating varying between types from different vendors - the GO itself, the amount via the driver settings. It was just one of the many observations that the Durabrite pigment inks (the original WF2010W setup cartridges) didn't look very well with the GO I'm currently using - a Chinese one which came with their inks. Other pigment inks - OCP - Inktec whatever else I tested last year did not create the same look as this particular combination which is not so much a problem really - I won't buy any Durabrite cartridges , and the inks from the setup cartridges are gone.

The Hat said:
I love to Feck around with unconventual printing techniques and try to take the inkjet printer to where it doesn’t want to go
Click to expand...

That's what I did with the WF2010W, running with refill pigment inks, or dye pigment inks, or a gloss optimizer via a separate cartridge for a 2nd print pass. The printer is doing very well, printing with 3 pigment inks or 4 with the matte paper setting, dye inks in the glossy mode with 3 inks don't create a good neutral black, only the matte paper setting using the black ink gives good, very good results, very good black levels, large gamut, the paper feeds from the rear, no problems with any paper type so far, and it prints borderless. The printer is very slow when printing colors, and the cartridge ink volumes are small, the unit remains an entry level printer - but with better performance than Epson is selling it in its standard configuration. They don't want people to know it and don't want to sacrifice their business with the real 'photo' printers. It's an A4 printer, I'm looking for a similar test with an Epson entry level A3 'business' printer, the WF-7110DTW, running as well the 4 color Durabrite inkset. I'll look for its photo printing performance. Is this already a kind of printer tuning ? - I don't think so , there is no firmware hack, no hardware modification, no spoiler on the printhead carriage, it is just exploiting available options Epson does not intend to provide me.

I got the WF7110DTW delivered, 2 paper bins and double sided printing in A3, I ordered a B-ware unit with some imperfections, for 79€ via Amazon, the box has some scratches, the printer case as well, the ink cartridges were not pre-used...so it's overall a new unit with some blemishes, you get lots of printer hardware for the money - 16kg - a printer to be lifted by 2 persons as Epson recommends - o.k. The printer is set up and running, detailed tests will be done in a few days.