websnail said:
Couple of things that may already be in this thread (but I missed) and others that aren't so I thought I'd share while I have the info in my noggin.

1. Getting hold of the AdobeRGB1998.icc is an exercise in groundhog day frustration if you try the official channels. This workaround via the webarchive does work:
https://web.archive.org/web/2016032...files/win/AdobeICCProfilesCS4Win_end-user.zip

2. Little Argyll GUI works great to get you up to speed initially but doesn't appear to load up ini files using the ALT Click method suggested. I might be doing things wrong but ultimately I ended up using batch files instead.

3. In another thread it was suggested that creating profile targets using Portrait mode is a great way to avoid problems with the guide limitations on tools like the i1Pro, etc... To do this use R in the -p flag (eg: A4R) in printarg.exe

4. I've provided a modified of the CAP957 Grey 335 batch file to product A4 portrait mode targets and also allow you to input:
...for the final custom profile. Useful for helping you lookup the profile in Colour Management in Windows.

NB: rename to .bat once downloaded to allow it be run as a batch file.
Click to expand...

Just a couple of questions about your batch

How more accurate is this profile versus 480/600 patches profiles ? and in what ? colors or b/w prints or in fading effects ?

957 patches WOW, my last charts got 860 patches on A4R with -a0.84 and i had some problems reading some pattern sequence (with an i1pro rev d no uv-cut) but i don't have a ruler i used a thick white paper for it.

Any hints is welcome.
mavtop

mavtop said:
Why use 335 grey patches when usually 128 are enough for B/W prints ?
Click to expand...

I can understand you guys wanting as many colour patches on an A4 sheet as you can fit, but grey patches ?.. How many is enough. I found 21 to be sufficient in every case..
M

The Hat said:
I can understand you guys wanting as many colour patches on an A4 sheet as you can fit, but grey patches ?.. How many is enough. I found 21 to be sufficient in every case..
Click to expand...

21 enough for a b/w photo print ? but how accurate in reproducing b/w "colors" ?

i don't talk about a normal B/W print, i talk about a selling print or an archive print, something you want to see in the future that has the "perfect" rendition (good transition in greys and blacks).

I know that most depends on the number of inks (greys and black) of the printer, but for a 6 ink printer will be sufficient 21 grey patches ? or it will need more ? if more how many to show the printer max gamut colors/greys ?

This is my question, repeat i'm trying to print the best B/W print the printer can do.

I read (in this forum) that -g128 would be enough for B/W, so i used that on my targen command.

Creating an >800 patch target (possibly 957, i will try a day) which are the best values for White, Black and Grey ?

Or is better to make two running ? For the second using 1st run precondition profile ?

If so how would be the first run and the second run (i mean which values to use for White, black and Grey) ?
Last edited: Jul 15, 2022

You would need a driver which can handle RGB 16bit data files - which most drivers can't so more than 256 gray steps cannot be coded, and whether the printer actually prints all those 256 grays differently is a well kept secret.
M

thanks for your answer,

so 256 would be the max for the Grey (-g) to be used for creating a pattern chart.

mavtop said:
How more accurate is this profile versus 480/600 patches profiles ? and in what ? colors or b/w prints or in fading effects ?

957 patches WOW, my last charts got 860 patches on A4R with -a0.84 and i had some problems reading some pattern sequence (with an i1pro rev d no uv-cut) but i don't have a ruler i used a thick white paper for it.
Click to expand...

I'm going to lean back on the original post from Emulator that shows his comments about increasing the Greyscale patches.


Emulator said:
CAP957greys335.txt I have been experimenting with an increased proportion of greyscale patches in the 957 patch batch file. The result with 33% is a definite improvement and I cannot fault the test print on my Canon 9000 II. Should be good on any printer. (The file is now an updated version).
Click to expand...

As to the technical hurdles of actually getting it to scan I modified my reader setup to use a drawing board and an improved caddy that just made the whole process a lot easier to get right. I manage to read a target with the 935 patches now in about 8 minutes so long as I take it slow and gentle. I found that next to impossible with the original reader jig as it kept sticking and scratching the target at points.

I managed to create a new set of my famous 480 patch target cut into 4 sheets of A6/4x6 inch/10x15 cm post card format in order to be able to profile this popular photo paper size. It has in total 484 patches with very good neutral B&W prints and good details in the shadows (often blocked in bad profiles). To print the targets: choose borderless printing (do not expand: keep original size), color management disabled in both app and printer.

It outperforms most profiles with much larger amount of patches and can be read relatively easy with a Colormunki with an adapted ruler/caddy. It makes better profiles than the standard Colormunki profile including 2 extra optimizations and the amount of paper used is the same (using the shrinking method trick (4 in 1) by which you can print 4 standard Colormunki profile patch sets on a single sheet of Letter or A4 paper). 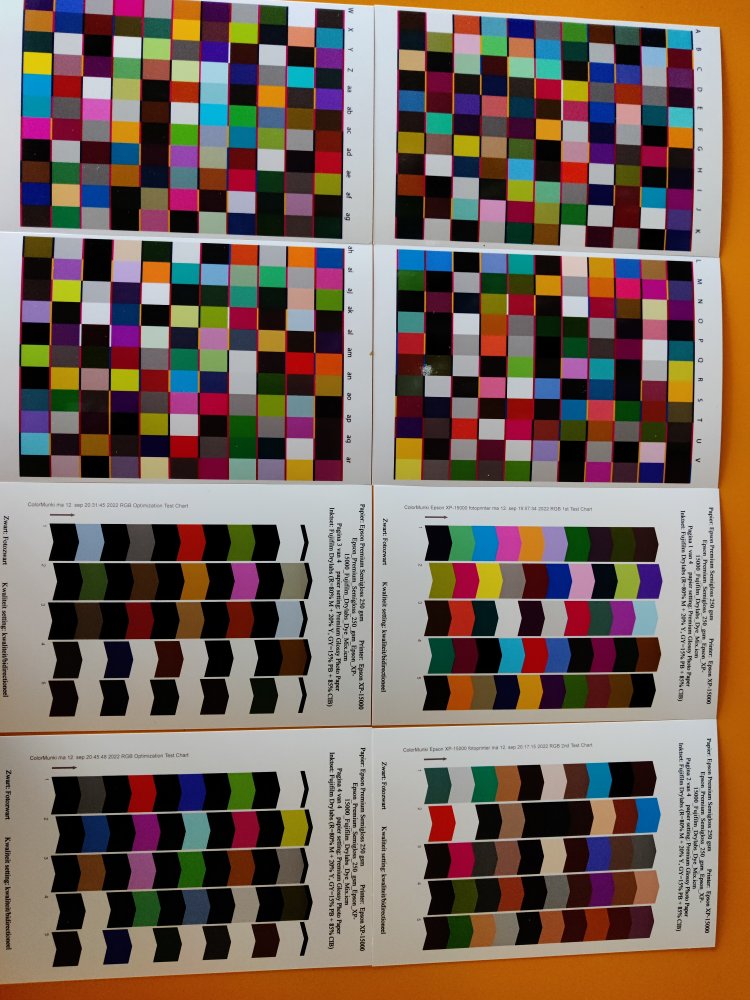 The 4x6 inch or 100x150 mm papers are really popular, and I have created just for this reason a small patchsheet with 96 patches for use with the i1profiler software/i1Pro2 spectro. I cannot judge the actual quality since I don't have anything to compare; I would like to propose a test we do together - I print your ArgyllCMs patch sheets and my i1 patch sheet, I send you the printouts - you scan - I scan and we compare profiles created under the same conditions - but with different software/hardware. That should reveal potential differences and explain if and how different methods create different - better or worse - profiles if any - I just don't know. I can print as well the ColorMunki patchsheets at the same time to have another profiler to compare to. There are probably a few more details we can discuss.
Since I'm not an ArgyllCMS user I annot do more than printing the patches, and you would need to do the rest, you tell me when the prints arive by mail, and I do the scan of my patchsheet at the same time so we eliminate any color shifts over the first days.

When I look up the .tif files of the patch sheets and do a 'Count unique colors' command I'm getting about 7200 colors on every sheet, not 120 each - did you do a prior compression - .jpg or whatever before you posted them ?

The TIF files has been compressed with zip compression, but the tiny differences are negligible (reading error with a spectro has much greater than those tiny differences in colour). Even my 480 target has some much more colours when you count the unique colours.
You must log in or register to reply here.
Share:
Facebook Twitter Reddit Pinterest Tumblr WhatsApp Email Share Link