How much ink does my canon ink cartage hold

Ink stained Fingers said:
the game is not to put a few more millilitres into the cartridge or not , the game is to reap the maximum profit from the customers, and reducing the actual contents - whether it's inks here or potatoe chips in plastic bags is quite a popular game by lots of companies
Click to expand...

You are more than likely right but to me it still makes little sense. Altering the size of a bag of Potato Chips or Crisps is easy, the only thing you have to alter is the weight measurement on the bag, a 30 second job on the print software and tweak the dispensers for the Crisps probably 30 seconds more. The same goes for most food.

Ink carts and spending out of new moulds different sized foam (as shown in peters post) and now i think about it altering software that programs the chips (no pun intended) on the ink carts just seems like a load of effort to save less than 5ml of ink, id sooner them just charge the £5-10 (or 20 is dollars) more for the device in the first place with normal size carts would save them time, probably money in the longer term, as ink is so cheap anyway, and certainly if i want to go all eco would help save the planet from the dreaded plastic scurge and having another load of it laying around in some factory.

I may be wrong perhaps they have looked in DEPTH at costs, then again i doubt it and it was more than likely a narrow minded decision and conclusion of give customer less we will make more money, which it may well not be once you factor in all the time and effort.

I think all manufacturers of ink jet printers for home use have the same price policy. They sell the printer with little or no profit or even with a loss as in the Pro-100 50$ offers. Instead they get their profit from ink cartridge sales.

I remember the high capacity version HP cartridges 78 tricolor with 39 ml total of ink and the pigment black 45 with 42 ml of ink. But a new set of these cartrtidges were almost as expensive as a new printer. These cartridges especially the 78 were difficult to refill and get working reliably, so re-manufactured cartridges were popular. I think that HP lost a lot of profit to the commercial refillers, so I think they made the cartridges for newer printers much smaller so they could be sold for less but still give a high profit per ml of ink. IIRC the HP 21 and 22 were among the smallest cartridges in capacity, 4 ml pigment black and 3x1.3 ml dye CMY.

I wonder what the setup version (included with printer) for the HP carts you mention contained ink ml wise.

The 45 and 78 cartridges were used in some HP Deskjet series printers. The cartridges also were available in low capacity versions. These contained only half the amount of ink of the high capacity versions, meaning 19 ml for the standard 78 and 21 ml for the standard 45. The standard versions were included with the printers. There was also a type 15 black cartridge with 21 ml capacity, IIRC this cartridge was more expensive than the regular type 45. This cartridge was partly compatible with the 45 cartridge. Some printers of the Deskjet series could only use the low capacity and more expensive type 15, other more expensive printer models could use both this cartridge and the more economical type 45 and 45 high capacity.

IIRC the type 56 and 57 were high capacity versions of the type 21 and 22. They probably held twice the amount of ink. This was 10 to 15 years ago. Today the XL versions of cartridges typically hold 50% more ink than the standard or setup or starter cartridges, both HP and Canon cartridges seem to follow this rule of thumb.

Ah well that makes more sense, its the only 1/3 to 1/2 filling of setup carts i can not understand and the restricting of amount of ink per cart with a new printer ONLY.

The actual selling of 2 carts with different ml levels for a printer (IE standard ml levels and carts normally dubbed XL versions) i can understand the logic behind.

If you want to refill the cartridges, refilling XL cartridges makes most sense. To refill you would need to buy a set of new or used XL cartridges so the concept of normal and XL cartridges is also a defense against refillers. See this post and the following post.

Even if I as a refiller don't like the idea of two sizes of cartridges, I must admit it makes sense from the printer manufacturer's point of view.

The original question about capacities has already been answered in previous posts but I wanted to summarize that PG-243 is the starter cartridge Canon supplies with new printers with 5.6 ml of ink. PG-245 has the same physical construction but is supplied with 8.0 ml of ink. Both would have the same capacity when refilled. PG-245XL has a larger sponge and is supplied with 12.0 ml of ink. BCH Technologies has a very helpful summary of refill capacities for these and other Canon cartridges at https://bchtechnologies.com/blog/wh...44-and-pg-245-cl-246-for-canon-pixma-printer/ 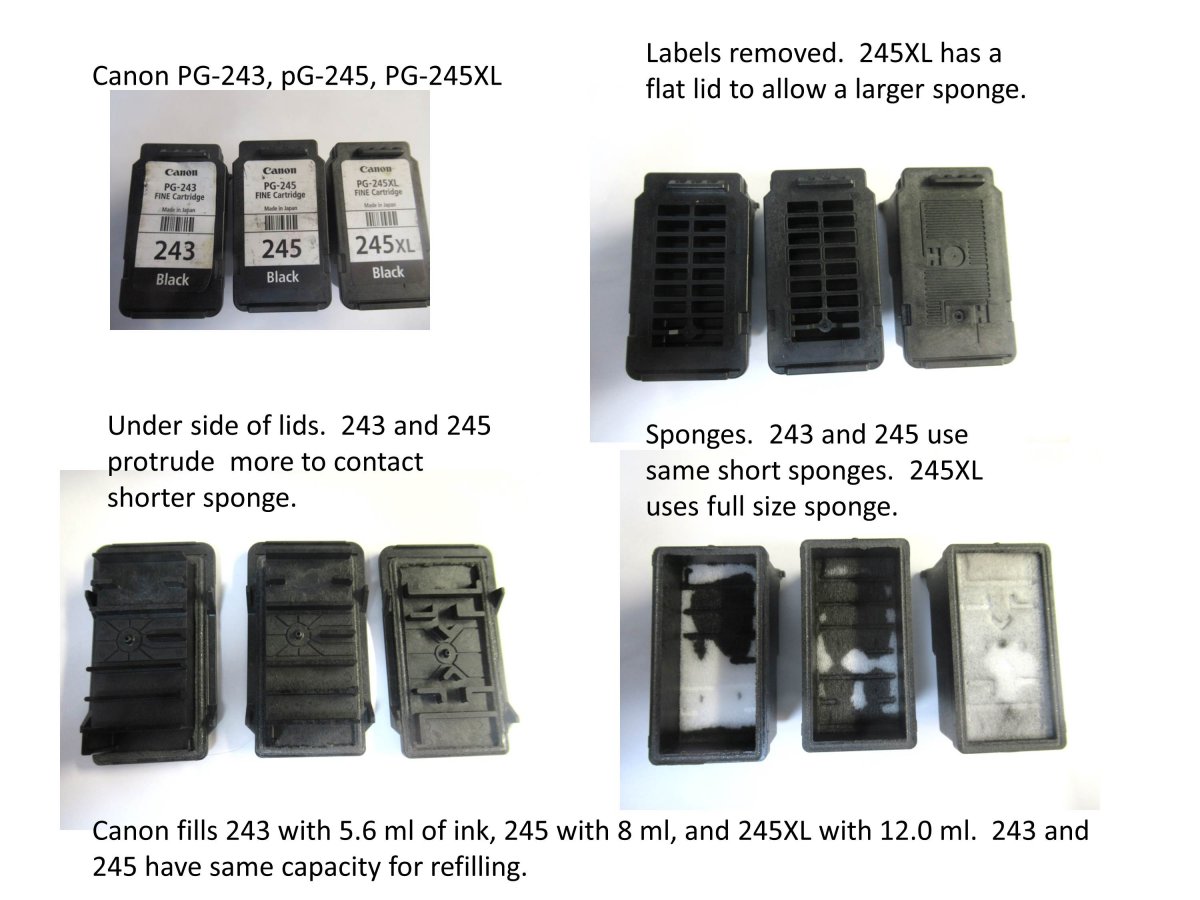