If you try to put that same white ink in Canon print head you are going to fuse it in the second. And you can throw that print head or printer away.

Simply, because piezo print head are designed for cold printing process. While Canon print heads are based on hot printing process and the heat is starting polymerization in polymer that is used to hold white pigment on one place after printing.

So the game is over. No white ink on the world for Canon inkjet printer.

Really?. There is no some way around?

Simple but first we would like to say few words about white ink for Epson.

If you take a look at offer of Epson printers with white ink you will definitively find out that all these White Epson printers are based on DX 5 or similar 8 channel print heads. Four channels are used for CYM Bk and other four channels for WWWW ink. Also you need appropriate RIP software that will put all this in one piece on the paper or on the dark fabrics. If you made your own home work on this subject, that is all an old story for you. Right?

So we made a test. We took and Epson with 90 nozzles for channel. Just to let you knew DX 4 has 180 nozzles on channel. This means we will be twice as slow. But that does not matter for this test. Then we printed with pigment Black Pigment Yellow Pigment Cyan and Pigment Magenta on white paper. The result is obviously perfect. But when you print the same pattern on dark paper, you do not see any thing. The same is with a white ink on DX 5 print had with one white channel.

Now we want to emulate that DX 5 180 nozzles print head and suitable RIP software on 90 nozzle print head. We want to find out what is a ratio of standard one pass pigment ink on white paper to the white ink on dark paper for the same visual and pleasant result.

How we made that? We took the same paper and put the same printout in the printer and print second time over previous print.

Nothing. The result is still invisible

What we have done the next?

We printed the same way as DX4 printers with 4 channels White. We printed 4 times over the same image. Now the result is visible but looks like some ghost image.

So what we have done next?

We continue to print over the same print as long we do not have the same acceptable white covering on the black. Like print out done with DX 4 pinhead and 4 channels + RIP.

And after 16 print out the result is the same.

That is the answer why you need to use print head with 8 channels. If you are trying to make and DTG printer with 4 channels print head, just forget it.

Than you need a RIP that would be let you print 2 - 4 more times over the same image in double pass. That is not supposed by standard driver. And with RIP you get extra covering power if you are able to use large inkjet droplet size in the best resolution. What is also not supported in the standard driver? So when you put that all together in DX4 print head you get the same effect we got in 16 pass print.

What does that mean all together? That is not new for myself. How does all this have any sense in connection with a white ink and Canon print head?

That means that for the same visual effect you are using 8- 16 more white ink that any other ink. That means that the same quantity of ink should pass through nozzles. That means, that for the same number the white heaters are more used that any other channel heaters. So if you do have an integrated thermal print heads as the most Canon printers do have these print heads live span would be 8 – 16 times shorter. !!!!!!

That is a probably a reason why we do not have white ink for Canon pri nters.

Also if you are using the white ink , the white ink cost would cost you beside print head cost 8- 16 time more than any other ink. 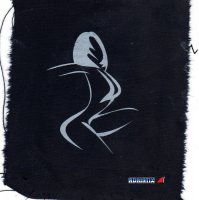 So should we write the next part of our development on white ink on Canon print head platform?

@Adriatix, there are printers that specialise in using white ink, but unfortunately Canon are not one of them, so trying it, is just a total waste of time and print head, plus the fact that no Canon printer can utilise RIP software.

If you wish to experiment using white ink it is best to start with the proper equipment so your chances of success are greatly improved, but starting with a Canon printer is just a dead end that will lead nowhere..

This sample has been printed with CLi 41 printhead 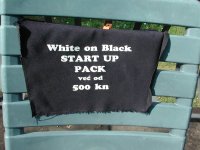 Congratulations @Adriatix, that is all I going to say...

@Adriatix Did you find a white ink that will work with the thermal printhead tri-colour CL41 cartridge? And did you convert the iP1600 to a DTG printer? Please some details.

Alternatives to using white ink for DTG printing is to use a white transfer sheet or use the screen printing technique.

By coincidence I found a Canon iP1600, that seems to be OK except for empty cartridges. If I can revive the cartridges, I might give white ink a try if available and reasonably priced.

This post has links to the service manual and a special service tool for the iP1200, iP1600 and Ip2200 printers.

No. There is no suitable white ink for thermal print head for the reasons we have explained in above text.

So we have to develop our own white ink concept.

If you have following in the detail the above explanation, then you have understood that for the same volume you are printing with standard ink you need 16 X more of white ink volume. If you increase the concentration of the white pigment by that same 16 x factor you are going to have white ink for silk printing. Not for inkjet printing. Even with silk printing on the dark you need some times to made 2 – 3 passes if you want a real white background.

This is definitively not the way to go. So we develop an complete new concept or process. It is A+ B+ C process or chain.

A ==is a white pigment ink for thermal print head but with an very low white pigment concentration. You do not have sedimentation or clogging problem typical for all white inks any more.

B ==is suitable Teflon transfer paper

C ==is C1 or C2 or C3 or C4 are different White Developer that stick to white ink printed on Teflon transfer paper. So white ink gives you white surface and sharpness or white reflection in the same way you are using an ordinary CYM Bk ink. While White Developer compensates in density those 15 layers you would otherwise need to put on background to have an printable background.

This is it . You are not using 16 passes process any longer. Just one. Ink cost you 15 times less than standard white ink. You do not need some printer with 8 channels. You do not need RIP software. Just a standard driver is suitable. And you change White Developer C type in relation to what material you are going to transfer.

Obvious there are some secondary issues. Tricks and skill needed, as with every other job. You need to have some support and education first. Considering that you are using a Canon iP 1800 as white printer that is worth while.

The same process can be a full color process as well. You can use it on some Epson printer. Here is a sample printed on two Epson SX 205 in two – three passes. Than transferred at stone, glass, ceramics or what ever you like. Obviously the white is White ink + White Developer

Adriatix said:
This sample has been printed with CLi 41 printhead
Click to expand...

PeterBJ said:
@Adriatix Did you find a white ink that will work with the thermal printhead tri-colour CL41 cartridge?
Click to expand...

Adriatix said:
No. There is no suitable white ink for thermal print head for the reasons we have explained in above text.
Click to expand...

Adriatix said:
A ==is a white pigment ink for thermal print head but with an very low white pigment concentration.
Click to expand...

So you did find a white ink that worked with a thermal CLI print head even though you stated there wasn't any.

You are doing something novel and of interest to people, whether to try or just for academic reasons. I probably will not do white ink printing but I enjoy reading how you have figured it out. Please be more straight forward so I can better understand your process. Thank you for adding to the knowledge of the forum.

I am repeating again and again. There is no white ink as you use to use it as a black ink. If you are using the best white ink on the Epson platform, the same way as black ink , you are going to have invisible white ink on black paper. End of story. If you do not understand why read again and again my previous post.

There e is a way around for Epson White ink in suitable pre coating, +4 channels and RIP software. But that all would cost you a fortune.

But if you use A+ B+C you can get almost the same result for the fraction of that cost. But A+ B+C
form an process or chain. Or the whole thing would not worth a dime.
So once again there is white ink for CLi 41 but it is invisible unless you do not print it in 16 layers, and that is unacceptable for any print head made of heater. or use just one layer as a anchor for White Background if form of various White Developers

Hi, very interesting to me.

It is transfer technique, not DTG.

It looks like somehow reworked concept of making PCB with laser printer and transfer paper (+ developing).

Yes this is a transfer. But it is a complete different bast.

In fact this is an logical extension of an project of >Inexpensive Braile printer for anyone<. Based oh HP78 inkjet cartridge