I'm at a bit of a loose end and stumbled across this forum.
Looking through some of the posts you all seemed to offer some great insight and advice so I thought I should try and get an answer to my problem here.

I bought a second hand Canon IP7250 a few weeks ago. I've had terrible luck with second hand printers in the past but this one seemed pretty good.
The nozzle check page printed perfectly and I could see it had printed less than 250 pages and the ink in the printer was still the original Canon cartridges that came with it.

Anyway I got it home and it worked perfectly. I've used it on and off for the past few weeks when this morning it stopped working for no discernible reason.
When I turn the printer on I get 5 orange flashes which suggests its a print head error. I tried powering down and restarting a number of times as well as taking out and putting back in the print head, changing inks as well as taking the print head out of a MG5550 and putting it in the IP7250 but nothing worked and I'm still getting 5 orange flashes.

I'm a bit worried because I've bought a new print head but if the working print head for the MG5550 didn't work then the new one probably won't either.

Does anyone have any ideas about what I could do? Is there even a way I can check which of the 14XX error codes it is actually giving out? I think it is 1403 but I'm not 100% sure.

I've tried to do a firmware update which I thought could trick it back into life, and while there is an update available, it always fails before the update starts transferring over.

Canon printheads can fail for no apparent reason, especially if they are old, and the iP7250 was probably introduced in 2012.

I think you are right in that the new printhead will not work in the iP7250 and testing would be risky. You could keep the printhead as a spare for the MG5550 or try to sell it, if it is bought from a regular dealer of Canon parts and not from China.
Last edited: Feb 19, 2021
S

Thanks for replying. I did already test the IP7250 print head in the MG5550 but it didn't work. After putting the MG5550 print head back in the printer still worked. Well... worked in as much as it prints but all the black lines are blurry. I'm going to try and sell the parts (power supply and print head) off separately as I don't think I'll be able to get that printer fixed. I have no idea where to start with that.

I've bought the new IP7250 print head from Amazon so it should be easy to return if it doesn't work.

Is it worth me even asking how much a replacement logic board might cost for the IP7250? I would buy a new printer but absolutely nowhere seems to have any decent ones in stock that I could buy cheap replacement ink for. Do you have any printer models you could recommend? I think I've had around 5 Canon Pixmas and they've all broken in some way or other within about a year of getting them.

silkystefan said:
Well... worked in as much as it prints but all the black lines are blurry...
Click to expand...

silkystefan said:
I think I've had around 5 Canon Pixmas and they've all broken in some way or other within about a year of getting them.
Click to expand...

I’ve had some of the very best canon dye printers over the years, now only two left, iP4500 and i9950, both on their last heads now, (10 years old) but I did get a Maxify as a good replacement and that proved to be very good purchase and it’s still going strong. Very easy to refill..

silkystefan said:
..... After putting the MG5550 print head back in the printer still worked. Well... worked in as much as it prints but all the black lines are blurry......
Click to expand...

I wonder, was the printhead OK before being tested in the iP7250? Or was it blurry before the test?

The blurry PGBK lines in these printheads is a typical failure. One theory is that this error is caused by a bad ink with insufficient cooling properties, as it is often seen after a short time of using third party cartridges. If the error was present before testing the printhead in the iP7250 I suggest to try your new(?) printhead in the MG5550 as you might then get a working printer.

If the iP7250 caused the damage to the MG5550 printhead then that is very interesting info. Can a defective logic board cause overheating and damage to the PGBK nozzles?

There seems to be logic boards for the iP7250 available at Ebay, Amazon and Aliexpress, But beware, they are claimed to be taken from working printers, and this might be true. Some of the boards are listed as being compatible with iP7280 which is a Chinese region printer. If you install a such logic board, your printer will now need Chinese cartridges!
Last edited: Feb 19, 2021
S

Hi all. Apologies, I didn't see that there were more replies on my post. The MG5550 was already printing blurry blacks before I tried the print head in the IP7250. I've attached a (bad) picture that shows the nozzle check test page. 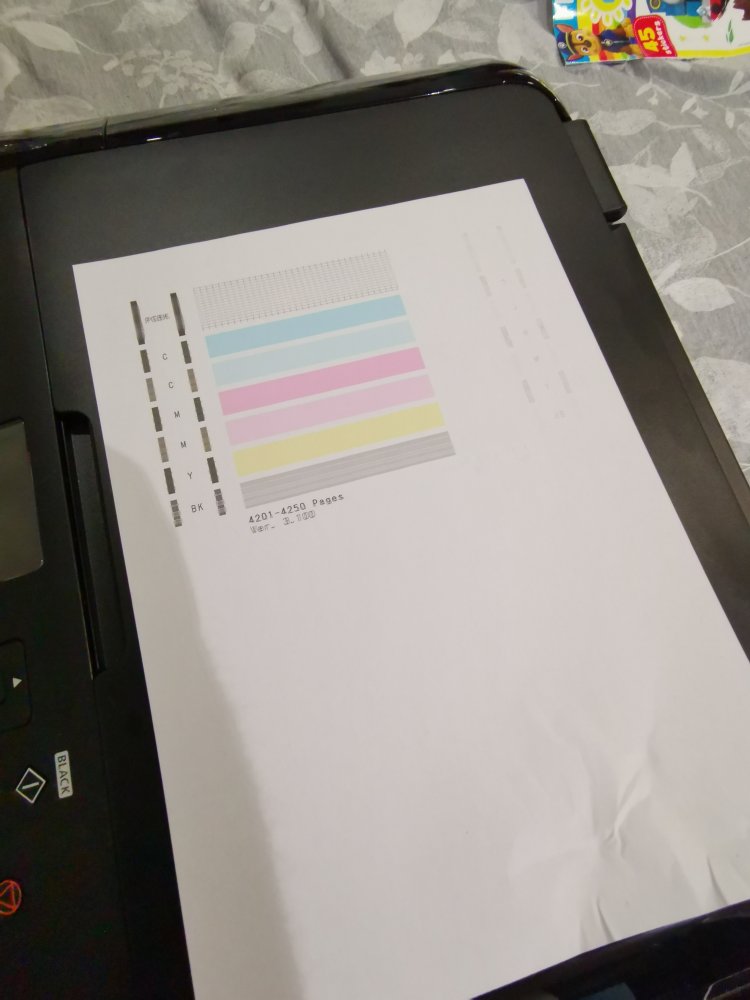 The IP7250 print head didn't work in the MG5550 so I just took it apart and sold the power supply on eBay and I might sell the print head too. UNLESS the reason the blacks are printing blurry is because of the print head itself rather than bad timing belts or whatever belts move the print head.

I think I'll probably just sell parts of the IP7250 to at least make back some of.the money I spent on it. Or just sell the whole thing as for parts or not working.
S

Also the brand new print head that was delivered today didn't work in the IP7250 so there must be another reason for the 5 orange flashes error.

Horrible image if you are trying to show us blurry lines. Is your camera/phone unable to get a close-up?

Let's cut to the chase. If the Pigment Black vertical lines of the latticework look like bowed train tracks then the the Pigment Black nozzles are irreparably warped. See the following link for a good image. The workaround to keep using the print head is to use a Photo Paper setting, even if using Plain Paper. This will bypass the Pigment Black cartridge and use the Dye ink cartridges to make Black. Won't be as pretty and will not be smudge/water resistant.

Then there are separate issues with the Dye-based Black ink. Can't be sure about the other colors.
S 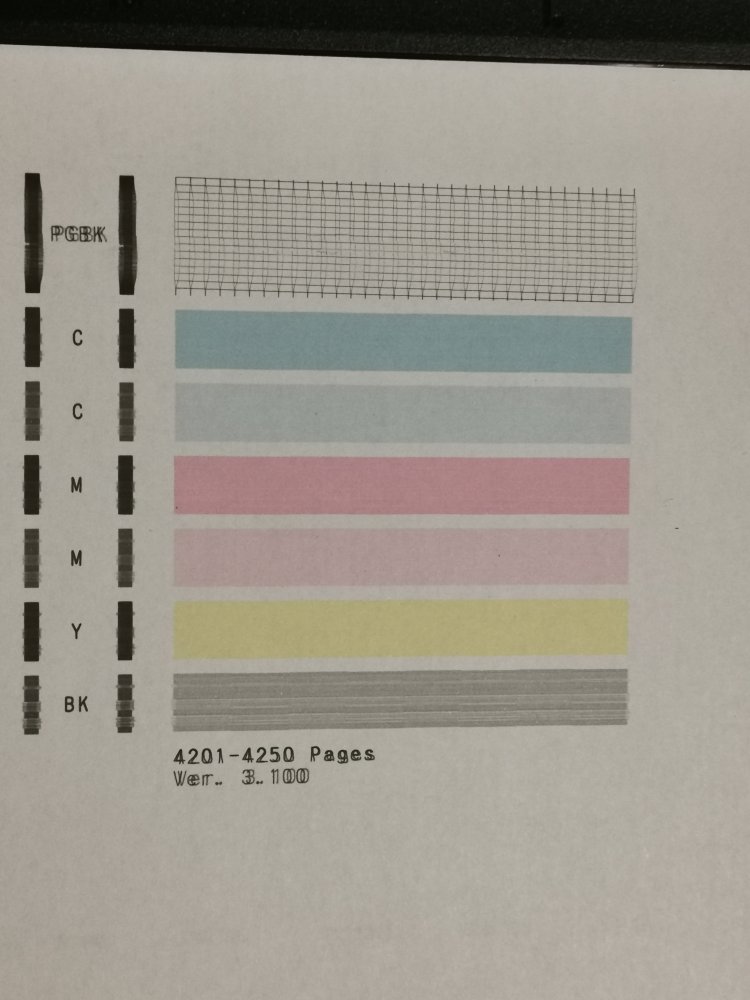