Artur5 said:
I tend to avoid parts taking more than 10 hours because I hate leaving a job overnight. and check that everything is OK.
Click to expand...

It doesn’t bother me one way or the other, if it buggers up, because then I get to print it again, if I get it right the first time it works, and if I don’t then I need to redouble my effort, it’s like an enjoyable Déjà vu..
I have a habit of repeating my mistakes..

OK got my Bees nest finished today..
It took a bit of time but it was worth waiting on, I was a bit over the top with the size, now that it’s finished, it could have been half the size and still done the job, all I can ask for is a guest to find and fill it next spring.. 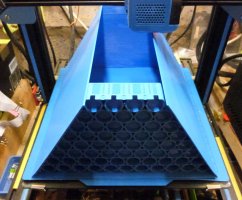 This is 2 and a bit days in and just before it gets the top on.. 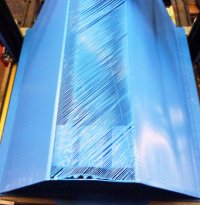 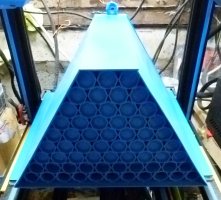 This is the first layer to cover the top, the head travel was 4 cm to fill the gap and it held up well with very little bow and no stringing. 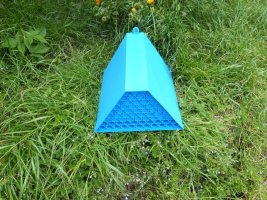 Here she is just finished.. Just have to find a good spot to locate it..

Looks great! Might be a bit late in the year now for a lot of the bee species who usually look for a nest in Spring, but who knows, you may be lucky.
A

@The Hat, I don't think you intend to leave it at ground level ?
That might be a problem if Ted liked it more than the Lampost Mark V.
Do bees have a very sensitive "nose"..?

Redbrickman said:
but who knows, you may be lucky.
Click to expand...

It’s not a case of me feeling lucky, I hope the new resident will fell lucky and accept my hospitality..

Artur5 said:
That might be a problem if Ted liked it more than the Lampost Mark V.
Do bees have a very sensitive "nose"..
Click to expand...

He doesn’t go there, because Buddha won’t allow it, and the sound of bees should scare him..

Artur5 said:
Updated Murphy law : the longer it takes, higher are the chances of failing..

I tend to avoid parts taking more than 10 hours because I hate leaving a job overnight. My subconscious awakes me several times during the night and I have to go there and check that everything is OK.
Now I prefer models composed of multiple parts, to print leisurely a few hours each.
Click to expand...

Vast majority of my prints I do are 3 hours or less (most are only an hour or less), and anything 10 hours or under, I'll just print during the day since I can keep an eye on it in my office.

If the situation arises where I have a print that is 10+ hours, I might do an overnight print, but ONLY:

With those conditions, I guess that we'll never print something like The Hat's lampost garden.

Nifty said:
1) If I'm using a filament that I know will be 100% reliable and won't need my attention
2) If the first 30 - 60 minutes of print layers all look perfect
Click to expand...

Sounds practical..
Necessity is the mother of all inventions.. If you need it.. Why Not....

With my Multi dry box, it feeds 100% of the time, and no jams, but just remember to the trim off the excess filament from the inside of the spool before installing.. Now long runs are acceptable.. 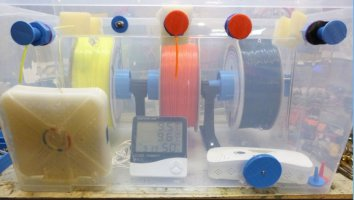 I haven't had a bad jam for months. None since I started to use only reliable brands with neatly winded spools.
All the same, I still can't sleep well leaving my Prusa by itself all night long.
I have dreadful nightmares of a huge spaghetti monster covering the bed plate and the hotend.

Call me paranoiac, but my enclosure is fitted with a smoke detector just in case things went real bad..

Artur5 said:
I haven't had a bad jam for months. None since I started to use only reliable brands with neatly winded spools.
All the same, I still can't sleep well leaving my Prusa by itself all night long.
I have dreadful nightmares of a huge spaghetti monster covering the bed plate and the hotend
Click to expand...

I’ve had the opposite with filament reels, only one was bad with many brakes in the line, and that was a high quality expensive brand supplied from Holland, (Twice the price) and yet I mostly used the cheapest filament I can find, and never had any issues with any of the cheaper brands..

The most annoying part was from the seller and the manufacturers silence, neither would give ANY explanation as to how this happen or how a damaged roll of filament could have been passed for sale, but I’m sure it wasn’t the only roll, because their guilty silence proved that..

I probably used 6 different brands of filament from various companies in the making of my lamp standard (All Black) and I could see the differences between each brand, some were shiny, some matte, some were smooth and others were a bit rough and all varying shades of black.

I spent well over €2500 on black filament for the five lamps, and I’m not sure if I went back over the usage, I could tell how many rolls exactly I used, but in all that time only one was bad, and yes a few times I came back in the morning to find a big bundle of fluff where the print came unstuck, shite happens..

I’ve had my CR-10 now for about 5 years and it has proven to be unbelievably reliable, despite running it 24/7 for months at a time and at about €335 it couldn’t have been better value, I have lost some bits and pieces that failed alone the way, but that’s the beauty of it, nothing is unfixable..
You must log in or register to reply here.
Share:
Facebook Twitter Reddit Pinterest Tumblr WhatsApp Email Share Link