Initially there were no resetters for the Canon 250/251. So most wanting an economical alternative used virgin aftermarket carts and as a result refilling the inks presented no issues.

Then I discovered the issue with the Pro-100. So I recommended using flushed carts and discarding the yellow cartridge or else when the remaning amts of OEM is presented even with something as simple as water....a precipitate will occur. Hat called it yellow jello. Well it is not really a jello but a network of gelled molecules. Thus don't try and flush with water only....you accelerate the problem.

I have been too busy with more pressing issues than determining how well these resetters worked. However, one thing was always on my mind but because I recommended aftermarket carts, it was never an real issue to test whether the yellow ink on the Canon 250-251/550.551 and 270/271 and matching EU numbers would pass the yello jello test. So really before advocating their use (resetters) you really need to test the compatibility of the OEM yellow ink in these cartridges.

Thus if you contemplate using a resetter and refilling the OEM carts, then you had better preflush the yellow very very well. This task is complicated by the fact that the OEM carts are opaque and you'll never be able to see how well you flushed them. However, if you decide to go the refill OEM route, be aware that you MUST throughly preflush the yellow carts very well, If you don't it is likely that around the 5or 6th refill, depending on how much you empty the carts you could start running into issues.

What about just testing by mixing with the refill ink. It will be hard to detect. The standard compatibility tests do not reveal this behavior. It needs to be diluted in very very low proportions and then left to sit for quite a while and then you'll need magnification lenses to detect the formation of the network...or as Hat put it, yellow jello.

So beware. This is not a good situation EVEN if you use OEM ink exclusively. If at any time, you have to remove the printhead to clear a clog and rinse it in water, you are risking clogging the yellow channel BECAUSE of the very action of trying to unclog by rinsing.

So for those who have reused the OEM carts, be careful.

Presumably you can use a spare cleaned OEM cartridge from another colour in the yellow channel, but is there any way to clear the yellow channel in the printhead, sufficiently, to prevent the head itself clogging?

The chips on the OEM cartridges are paper thin, actually made from phenolic resin paper and both glued and "riveted" to the cartridges. Attempting to remove a such chip ruins it. IIRC @The Hat posted a photo of a torn PGI-550 or CLI-551 chip. I read somewhere that some intelligent ARC chips could also be resat using an original redsetter. A such chip for yellow could maybe be attached to an OEM CLI-551 cartridge of another colour than yellow that had ben flushed.

Here is a scan of a Canon OEM CLI-551 BK cartridge, notice the paper thin chip: 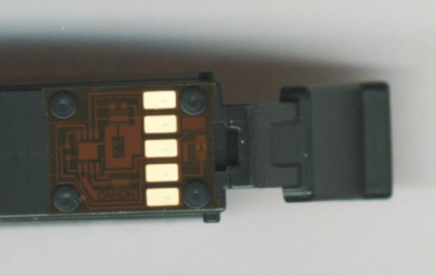 Canon is possibly also using the same yellow ink in the G-series printers with built-in CIS. See this post about clogging and overheating when using refill inks.

Emulator said:
Presumably you can use a spare cleaned OEM cartridge from another colour in the yellow channel, but is there any way to clear the yellow channel in the printhead, sufficiently, to prevent the head itself clogging?
Click to expand...

I think changing the cartridge triggers a purging that will remove the ink or most of it from the print head. Do an extra nozzle cleaning of the dye nozzles, and all the old ink should be gone. I think this is the recommended procedure for the Pro-100 when changing from yellow OEM ink to yellow refill ink.

I think Canon might have used more "chemical tricks" with the inks for the PGI-x50/CLI-x51 and PGI-x70/CLI-x71 cartridges. There have been posted questions about double print in PGBK and a striped and fuzzy appearance of the dye BK. Here is a thread about a typical PGBK error. I didn't find any posts with the fuzzy dye BK, but there has been some of these on this forum or maybe druckerchannel.de. Here is a crop from a scan showing the error on my MG5550 that uses the PGI-550/CLI-551: 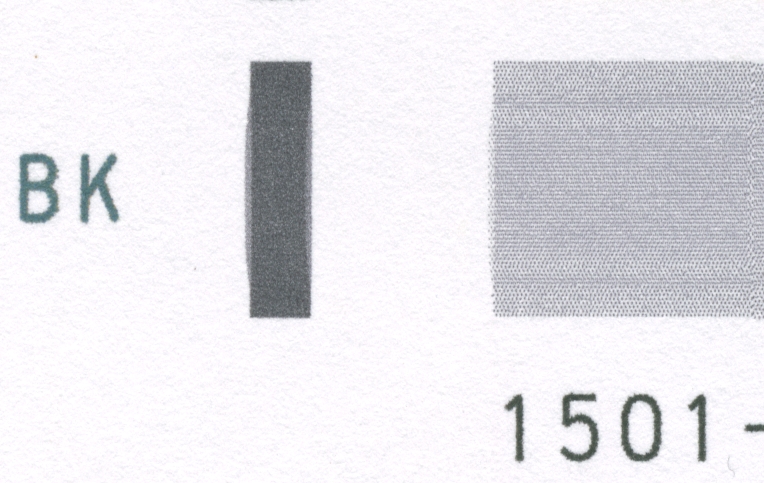 These errors have only been reported with PGI-550/CLI-551 printers. An explanation found on druckerchannel.de is that the print head defects are caused by a bad aftermarket ink with wrong cooling properties.
Last edited: Feb 25, 2017
H

I have the fuzzy dye black pattern on a MG6120, IP4700 after I used a once famous refill ink other than Precision Colors.

This is interesting. The iP4700 is an older print head generation than the MG6210. I didn't think this older print head generation was affected by the "fuzzy dye black" problem. Maybe the cause of the problem is that the dye black ink uses a high concentration of dyes? The error caused by a change of ink brand suggests to me that the druckerchannel forum theory of bad cooling properties of the ink is correct. 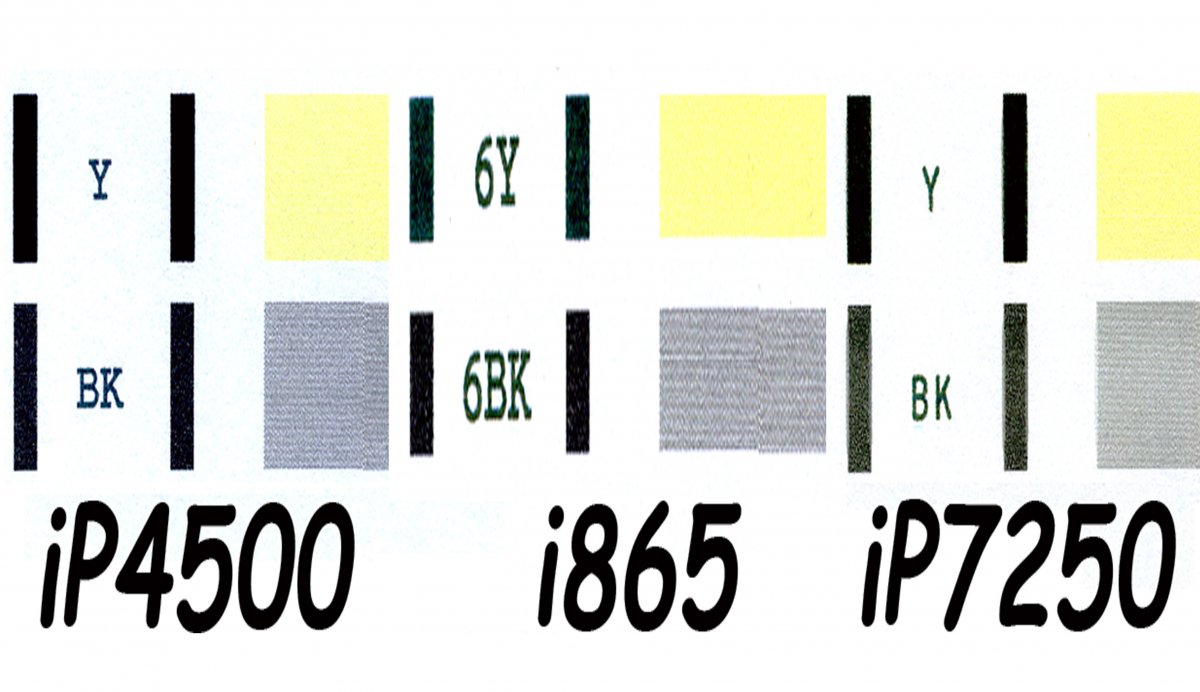 I think 3rd party black dye/photo black along with gray the less fade resistant colors. Black in my observation turns reddish or brownish with time. Pure black patches or some black and white prints suffer from this problem. With my MG6120 prints they are less fade resistant than the ones printed with a MP620 and using the same ink and paper. The only thing that changes is the addition of gray ink, ink used comes from same inkset and dealer (gray is responsible for this?).

Better dyes in black was the cause for Chromalife 100+ cartridges to be smaller. Older OEM ink for previous generations of CLI-8 and BCI-6 also suffered the problem of brownish/reddish black. It seems 3rd party manufacturers can´t match new Canon dye black chemistry, perhaps cost is the main thing that keep us from getting better ink with better formulation.


Prints made with MP620 for a strange reason last longer. I refilled the MG6120 with OEM bottled Canon ink, colors were almost identical to OEM CLI-226 ink, but again same fade resistance. Now I haven´t had the time to test the OEM Canon GI-190 ink in my MP620 and see if I have better results than the current inkset and avoiding the use of grey ink.

Further test will let me know if the gray is the color responsible for low fade resistance. A good source of black is essential to avoid getting the fuzzy black pattern. I remember using some specific brand of refill ink in my MG6120 and IP4700 and getting the fuzzy black. The MP620 was not refilled with this ink and is just OK. Usually I don´t print photos with much black areas. Perhaps a few uses with low quality ink is enough to damage the printhead.

Printhead alignment wont do any good to this issue. At first I believed it was just an electrical problem, but reading the forum I am thinking is just bad ink messing the ph.
H