I take the blame for the clog, I switched from gloss to fine art paper and invited calamity into my life. I've attached a few photos, a successful gloss from a couple months ago and then the fine art print where no ink was delivered. Then the switch back to gloss with blobs. I did a few nozzle cleans but the #1 pen would not print a pattern. That's where I'm at. Although it didn't register, I think the 5081 was empty, so I have a new one now.
In the past I've taken all my work to my pro printer on Epson Plotters so I don't have any experience repairing printers. I've relocated to the UAE from the US and now find this printer to be an integral part of my work as I have no printing contacts here yet. I've restored a few old cars in the past and am willing to try fixing things I think I can. I got the assembly PDF and watched a few of Jose's videos. I'm reading a lot and doing my homework as I'd really like this old girl running 100%. I've looked at maintenance systems offered by InkJetMall and am considering filling my own cartridges if that's a wise decision. I just need to get a good system going and am open to advice from experts. A good cleaning seems to be a good place to start, that wiper is caked with ink. Thanks, Jeff

To get rid of the ink leak/blobs you need to replace the Pk/MK dampers or the entire damper system. You can find them on ebay.

I spent a fair amount of time reviewing Jose Rodriguez's videos and info from The Inkjet Mall. A good cleaning seemed like

lolopr1 said:
To get rid of the ink leak/blobs you need to replace the Pk/MK dampers or the entire damper system. You can find them on ebay.

a good place to start and this printer is pretty clean. I did Jose's all day printhead soak and that solved the one cartridge not printing problem. Unfortunately when I printed on glossy paper the printer had to switch from Matte to Photo and that's when the flood started. I guess thats to be expected with the switch. I'll clean up and see if it will print as long as no switching occurs and start looking for parts,

Rookie mistake, I should have switched the ink back to Photo Black before all the cleanup. I get to do it twice now. Initially my mistake was to switch to fine art paper triggering the doom switch. I plan to print on gloss to get prints ready for plotting, so I really don't need the Matte Black. I do plan to fix the problem and get more involved in maintaining this printer.

lolopr1 said:
To get rid of the ink leak/blobs you need to replace the Pk/MK dampers or the entire damper system. You can find them on ebay.

I'm not exactly sure of what dampers you're indicating so I'm pasting some parts I think you're suggesting.

The first two images look the same and are called dampers and overall called the Ink System Assembly. I would likely replace the whole assembly, considering the amount of work involved if these are the dampers you're suggesting.

The third image, the Pump Cap Assembly, has the rubber seals for parking the printhead. I think it's mentioned replacing them every couple of years.
The last, the Ink Selector Unit, I have not found a replacement part. You indicated you had taken yours apart and decided it was not the cause of the ink blob problem. 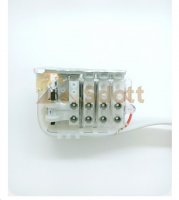 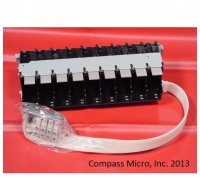 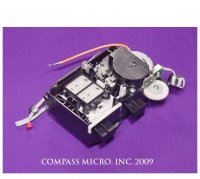 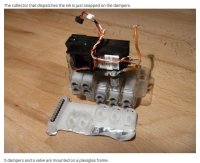