ISF, I figured the BCH Premium Dye would fade, probably on line with the Cone dye I tried once but it was gone in 3-4 days. I haven't tried a fade yet with the BCH as I've been using a lot of it.

What is interesting is my blacks are pretty black though, and even blacker than the Epson pigment black for some reason. It might be me overloading the normal driver supplied ink though by +20%. I generally try to get the ink loading up to where the test patch rectangles (with the before/after diagonals) are somewhat the same density using BasICColor, and then continue with the profiles. Generally, it causes me to need to boost the ink load in conjunction with ColorThink Pro 3 for the largest color gamut.

Back in ColorThink, I tried a +20% ink load on a couple of Epson glossies, one was their Premium Glossy and the other was the normal Glossy so might not be fair. These were buried in my 500+ ICC profiles for all the junk I've run through the printers.

Below you can see through the BCH Dye ink wire-frame of the Epson 3880 Pigment on the bottom of the L-axis which shows the Epson Pigment black ink is not as black as the wire-frame of the BCH Dye ink. Odd huh? Epson does do well as it pushes the blues/cyans out quite a lot, but don't know why my Epson pigment black is less than the BCH dye other than maybe the glossy paper change or the extra ink loading I apply. 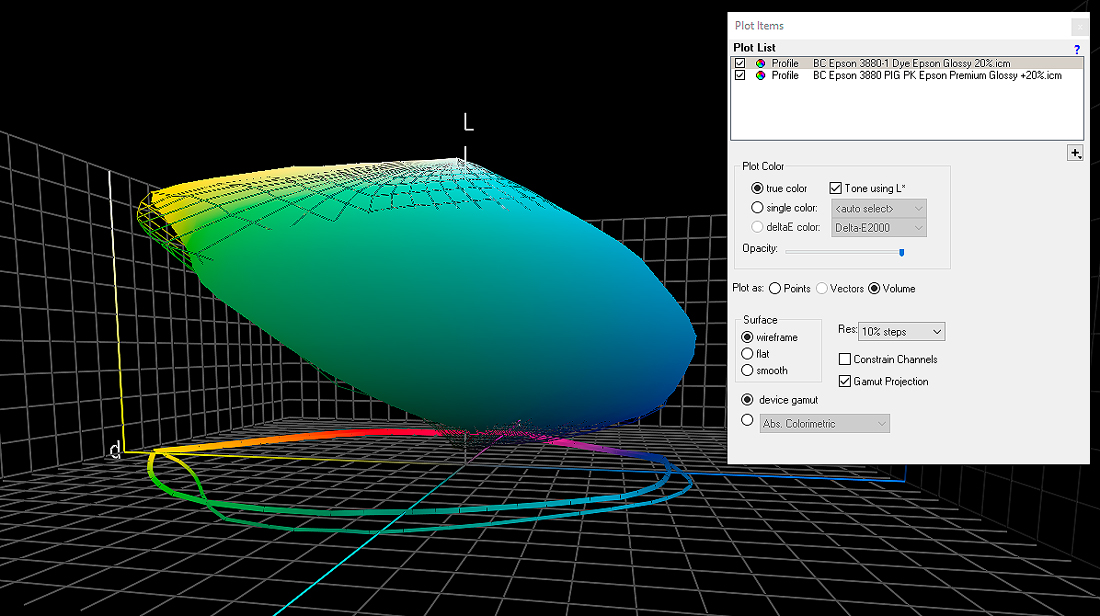 When do you sleep?

I've been complaining to ColorThink about adding a scroll bar to their profile searching window as it takes me a couple of minutes to get to whatever ICC I'm looking for. They are working on it for a future edition as it surprised them too, but told me to make some other folder with a small batch of 'em in the meantime.

I show 498 of the silly things in there now. I got tubs of paper patch strips too for whatever reason (Pack rat maybe?). Too many papers too. 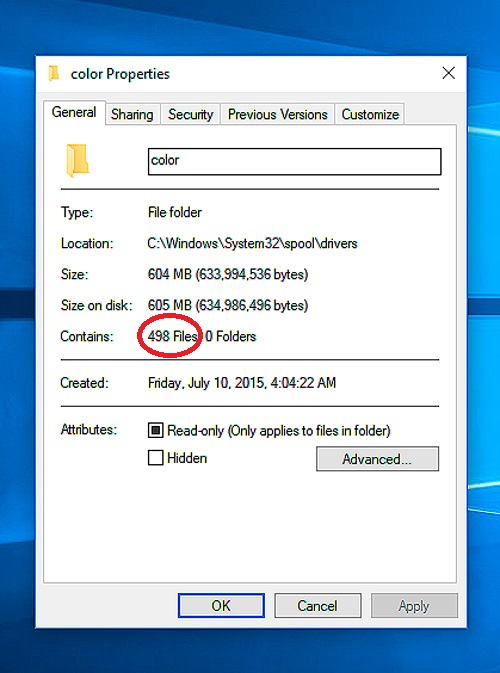 I wouldn't tell you that I have 800+ profiles not used anymore - printer gone - inks gone - papers used up etc but the i1io robot arm did most of it - it scans 1100 patches on A4 in about 2 min .
Comparing the BCH ink to pigment inks - sure - but it wouldn't tell you whether other dye inks would do better.
Cone dye inks -
http://www.vermontphotoinkjet.com/products/ink•thirft-professional-dye-ink
Some of their inks are not made to last - they tell you
'Short-life graphics do not need to last three years outdoors or over 100 years indoors.'
I tested their Inkthrift CL ink attributed with a higher fade resistance on par with Epson Claria, I couldn't confirm that in some tests. That ink is better than other inks but not good enough in relation to their price.
Their are some more of such niche products - like the Lyson Fotonic ink claiming as well best fading performance-
As mentioned above I found the Fujifilm Drylab inks best performing, and since recently as well the Epson 106 ink.
Pigment black - try the HDR inks by precisioncolors - they have a visibly darker black point.
I tested the BCH ink based on their claim of fade resistance but I won't use it any further, the shipping cost to Europe is just too much for an ink performing on this level.
You are happy with it, you have tested it , just continue to use it.
Ink density adjustments - desktop printers A4 or A3 won't let you , I do it on my old Pro 7600 as well

I think we should move the number of profiles we are using - or not - or just storing ...... into the
thread about printing addicts
https://www.printerknowledge.com/threads/you-know-youre-a-printer-addict-when.1401/page-10

Ink stained Fingers said:
I have 800+ profiles
Click to expand...

Winner of who can pee furthest ... so far. Mikling? JToolman?

ISF, I think I might try the Precision Colors HDR Black next. Wonder if it is the same as the Cone HD Photo Black that they recently came out with - although I think it is pigment.

Fwiw, I have a lot of old QTR K7 era profiles that I could flush out. That was a huge waste of time and money, imho, and more like working on a college master's thesis and plotting the endless curves and stuff in Excel. I still get the Yahoo! QTR group emails with people going through that mess. Sure sells a lot of ink and paper though. The new xrite i1Studio does a great job for B&W now and even allowing for sundry tints too. Only part of it I liked was the gloss overlay that covered some of the bronzing - and I put that bronzing ahead of fading for it bugging me the most!

Anyhoo, time for some ink folder house cleaning - right after I ask my doctor for some drug to cure my OPI (Obsessive Printer Ink) disorder.

Precisioncolors is def. not selling Cone inks, they are different, different pricing, slightly different black level.
Ref gloss optimizer - I did some testing of its impact
https://www.printerknowledge.com/th...d-fading-of-dye-inks.11608/page-8#post-105377
Last edited: Sep 22, 2018