I have spent the last two days trying to undo clogs on my Epson P400, the printer sat unused for a month or so and 3 or 4 of the colors were almost totally blocked. I used PiezoFlush to clean underneath the print head, and cleaned the head using PiezoFlush and the dummy cartridge that comes with it. After many machine cleaning cycles I was finally able to clean all but one color, the PK Black prints fewer than half of the segments in the test pattern. I have gone back and cleaned the bottom of the head housing several times, plus flushed cleaner through the head several times. The PK Black is not improving, this after many cleaning cycles. I'm at a lost as to where to go from here. Is it possible that a fault within the cartridge could cause such a problem? I'm using Precision Colors carts and bulk ink. 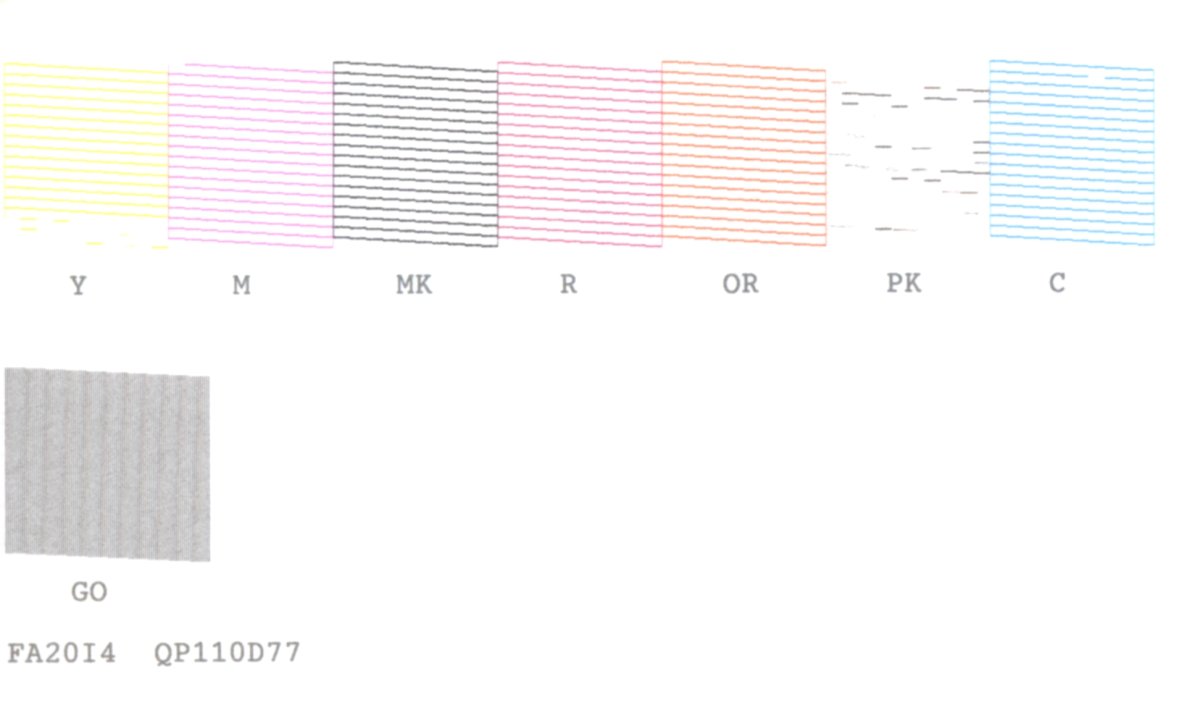 When you do a cleaning cycle and another nozzle print - do you see exactly the same pattern - same PK nozzles printing or are they changing ? If so you may have an ink flow problem - or you have solid clogs. Just use another cartridge - original or 3rd party - for a short while and test again. Are you using both matte and glossy papers - do you need both black inks MK and PK ? You may fill the PK ink into the MK cartridge and print on glossy paper with matte paper selection if nothing else helps, or you use a 2nd MK cartridige with MK ink and swap it when needed which you could do as a work around.
Last edited: Nov 22, 2022
C

I started working on getting the printer back to good working order about four days ago, magenta, red and PK all showed all, or almost all bars not printing. Using the procedures that come with PiezoFlush at first made the problem worst. I kept at it, cleaning the print head with PiezoFlush and a paper towel, flushing PF directly into the head, and cleaning the capping station, the results were erratic. Usually after flush the head with the PF, the test print was significantly worse, several cleanings and test prints later usually improved the situation. I'm including a few images of test prints, they are in order from top to bottom, the top being the oldest. The bottom result on the second image is where I am now. That was after several PF flushes, and installing a new reusable cartridge from Precision Colors. PK is only showing a couple of bars and they are from the PF, not the ink. Are there any other procedures that I can implement to get things back to normal? 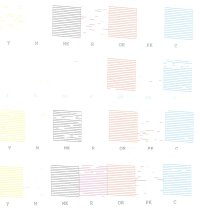 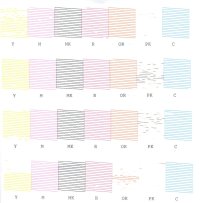 I'm irritated that orange is dropping out that much - from the 3rd to the 4th nozzle check line, that might be a sign of ink flow problems from the cartridge but I don't know, that's the point where my remote diagnosis might not help anymore.
Last edited: Thursday at 9:38 AM
C

So where to I go from here, are there any other options to get the clogs cleared up? I'm in unfamiliar territory, never having clogs anywhere near this severe before.

I'm not clear from your postings if you did a nozzle flushing already as shown in this video - in the 2nd half of it, there are several similar videos like that


Please proceed gently with pushing the cleaner into the printhead
C

Yes, I did do similar flushing, I used the instructions as posted here, from Inkjet Mall which is where I purchased the PiezoFlush. The video that you posted is actually a little more straight to the point, plus there are many very helpful comments. One such comment said that it took about 100 test prints after flushing to get the clog complete removed. I think I will try a couple more flushes, using some of the suggestions in the comments and see where that takes me.

Also, one of the comments mentions going slow and easy so as not to "delaminate" the head. If delamination is the issue that I am having, what signs would I see to let me know that it has occured?

Charles218 said:
If delamination is the issue that I am having, what signs would I see to let me know that it has occured?
Click to expand...

You may see cross contamination between adjacent colors - mainly visible between black and yellow - part of the yellow nozzle check prints black.

You should not just push the cleaner into the ink channel but as well cycle with a push/pull action - pulling part of the cleaner back into the syringe - trying to pull back those clogs which you can't press through the nozzles. But there is sometimes an end to all these actions.

I have seen as well completely blocked colors which could not be cleaned with all these methods, the problem is that there is no practical way to identify the problem - e.g. to look inside the ink channels in the printhead. And about no user has the capability to run a printhead in a test setup running and observing each nozzle individually. And I have seen other effects - e.g. that a cartridge was completely blocked - the spring loaded valve at the ink exit was blocked and didn't open.
C

Yellow and MK Black appear to be okay, hopefully that means delamination is not at play here.

The first time I flushed the heads with PiezoFlush, the syringe was very difficult to push, it finally moved but very quickly and all of the fluid was injected immediately. After that I was more careful and was able to use moderate pressure and pushed/pulled the fluid back and forth.

I'm still hoping to get this fixed, and looking for any other suggestions on what I might try. The printer has sat unused for the past two days, then today I did a test print, followed by a cleaning cycle followed by another test print. Attached is a new image that contains three test prints,:

2. The middle one is from today before I did anything else, I just turned the printer on and ran a test print. Notice that there are a few PK bars and the orange is much improved.

I would think that running the cleaning would make some improvement, but the opposite occurred, the orange and PK were worse. 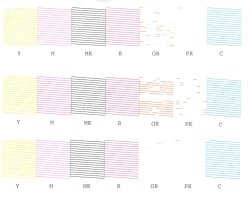 Charles218 said:
I would think that running the cleaning would make some improvement, but the opposite occurred, the orange and PK were worse.
Click to expand...