Clear Ink Base: seems to work with Canon bubblejet print head as well.....

Today I tested my Clear Ink Base I posted at the Epson section and I was brave enough to refill some old 570 cartridges who where completely dried up with a mix of 30 parts of Fujifilm Drylabs ink and 70 parts of my CIB mixture and put them into my Canon IP-7250 printer for the magenta and cyan position:

I used my light magenta/light cyan mix that I do not use anymore because I sold my Epson 1500W: 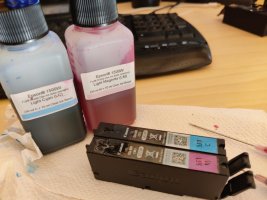 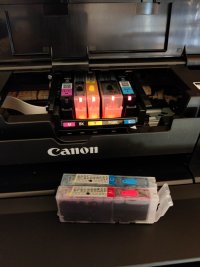 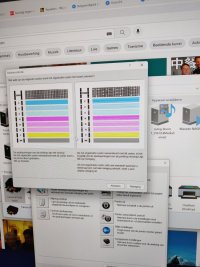 And this is the result of the nozzle check (the PGB black was a bit clogged but that was pigment ink, but the cyan and magenta position with my mixture of Fujifilm Drylabs and CIB is perfect: 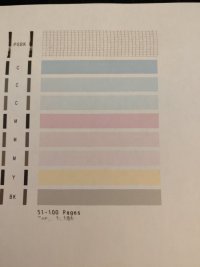 I printed a picture too with a profile made for Inktec left picture: Cyan and Magenta filled with LM/LC made from Fujifilm Drylabs and CIB base and right picture with pure CLI-8 compatible ink from Inktec (all other colours: Yellow and PB were always Inktec): 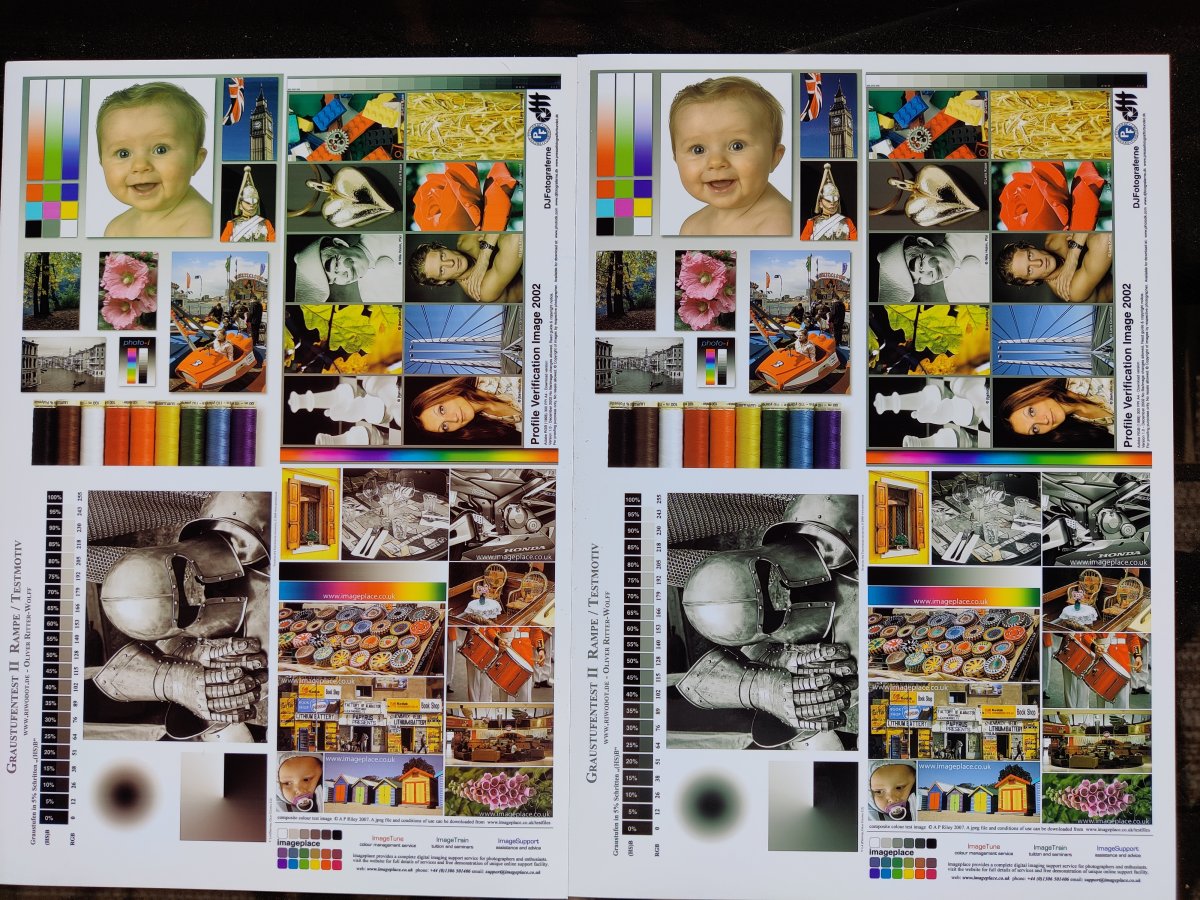 As expected the left picture with the light colours (LM/LC) will give less vivid magenta and cyan, but you can see the ink mixture of Fujifilm Drylabs and my CIB works perfectly in Canon bubblejet print heads too and no clogging at all. Ink seems to be plenished fast enough through the nozzles and there was no pooling at all (Netbit Glossy 300 gsm paper from Aldi). Both pictures were printed with the same profile just to see how the two inks behave. As expected the magenta and the cyan was less intense on the left picture, but print quality was the same.

While this might work in the short term, you really need an anti-kogation additive to prevent solid deposits on the heaters inside the nozzles. As a pharmacist you should have access to N-Methyl-2-pyrrolidone


You know: heating this substance gives a yellowish hue to your ink, so I would not recommend it in bubblejet print heads. More needed in pigment ink formulations probably but dye inks it is not needed. Isopropanol has also surface tension lowering capabilities and is a cosolvent too by which many dyes and other chemicals are enhanced in solubility.
N

pharmacist said:
You know: heating this substance gives a yellowish hue to your ink, so I would not recommend it in bubblejet print heads. More needed in pigment ink formulations probably but dye inks it is not needed. Isopropanol has also surface tension lowering capabilities and is a cosolvent too by which many dyes and other chemicals are enhanced in solubility.
Click to expand...

The actual ink bubble is not heated to any significant degree...and only a very small portion is flashed to vapor. Yellowing is not an issue. In any case, my personal experience is that without pyrrolidone as a co-solvent, printhead lifetime is very short, even with dye-based inks (and the existing literature seems to support this). It would be interesting to hear about your long-term observations down the road!

I am aware that N-Methyl-2-pyrrolidone is sometimes 40% or more in the ink formula, but I do not have experience with commercial ink formula. The idea is that this acts as a cosolvent for dyes and also as a humectant for the nozzles, keeping it moist at all time. How is your experience with piezo and bubblejet print heads ? For the moment my bet is on the more easily obtained propylene glycol (both humectant and cosolvent), for which you can most like increase up to 20% in the formula (but decreasing the ethanol amount a bit). Not sure how this will effect the droplet forming and drying time (pooling ?). Did you tried to make your own clear ink base as well ?
A

What about fungicides?. I suppose they're used on most inks, specially dye based, to prevent growing of algae/fungi. Of course if you mix the clear base with OEM cyan/magenta/black inks, the final light ink will contain a certain amount of fungicides, albeit much less than a regular ink.

everything above 20% ethanol or isopropanol or above 15% propylene glycol is auto preservative and no moulds, bacteria and viruses can grow into the solution. My solution has in total 50% of alcohols, so totally protected against microbial growth.
Last edited: Sep 20, 2022

Growth of algae/fungi could only be a problem if you mix and store an ink for a longer time and don't use it shortly after you mixed them up. Not all OEM inks contain a fungicide - just look up the MSDS e.g. in cartridges, there is no risk of infection until you insert them into the carriage and open the seals and even then migration back into the cartridge is a remote risk
A

Good to know that 'infections' aren't a common issue.
Many years ago I had an issue with ink from US vendor Miss.Supplies. One of the inks, cyan I believe, not long after the bottle was opened. became sort of gelatinous. It was almost impossible to fill the syringe because of the extra viscosity. My bet is that was algae or fungi already present when the bottle was filled.
Miss. Supplies replaced that bottle for free, but the irreversible damage to the printhead wasn't refunded of course.
Last edited: Sep 20, 2022
You must log in or register to reply here.
Share:
Facebook Twitter Reddit Pinterest Tumblr WhatsApp Email Share Link